This weekend parkrun tourism took me all the way to the glamorous suburb of Romford (it’s not actually glamorous) to meet my long standing internet crush, the lovely Victoria, and her equally lovely friend Sarah.  This is another parkrun that has been hovering near the top of my to-do list for a while.

Raphael Park ticks all my boxes: it has a lake, toilets, smooth tarmac (I don’t remember a single pothole) and gentle undulations.  The undulations part was a bit of a surprise because for some reason I had got it into my head this run was going to be pancake flat.  It actually contains two-thirds of the elevation of Finsbury Park, so it’s not a Hilly Monster but it’s not flat either. 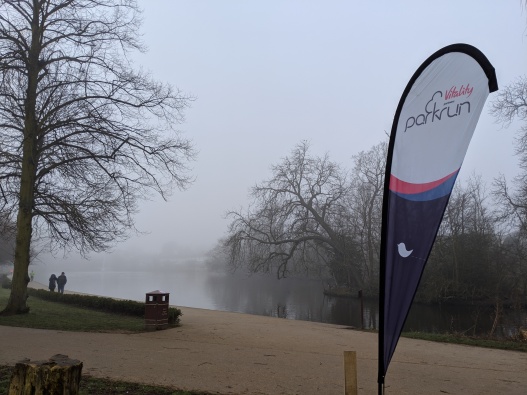 The course is best thought of as two loops.  The first loop is the landscaped part by the lake – this is where the majority of the undulatingness occurs.  There’s one short but steep hill, which leads to the second loop, which is round some tennis courts next to a big open green space.  The toilets are located at the very far end of this loop (so turn up early if you want to use them – they’re about five minutes walk from the start).  You do loop 1, loop 2, loop 1, loop 2 and then loop 1 a third time with the finish being exactly where you started (another thing I find pleasing). 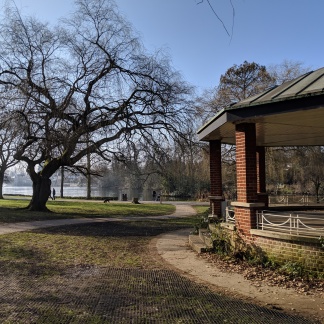 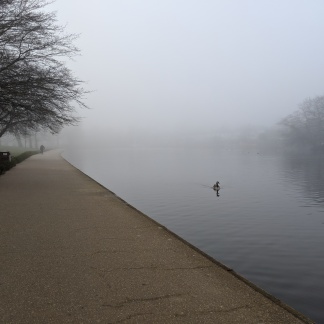 It’s a very pretty and well kept park that makes good use of a small space, and the only time I felt it was a bit too crowded was at the start.  It took eighteen seconds between “go” and me taking my first step forward (which was when I started my watch), and there was a lot of shuffling before we really got going.  There were 378 runners this week, which is quite a big attendance for them, apparently.  I did not see any cow cowls, but I met someone named Amanda who goes to Wanstead Flats and apparently reads my blog.  Hello Amanda!  I am quite shocked because I thought only two people read it and now I know there are at least three.

I am also pleased to announce that my faith in pacers has been restored!  After my experience with Patronising Pacer at the Olympic Park I will admit I shuddered when I saw them all lined up raring to go, but these were much nicer pacers.  I started in a big jumble with 33, 34 and 35.

33 duly sped up and was not seen for dust.  34 followed.  This left me just in front of 35, who I’d been chatting to at the start.  I tried to maintain this position but unfortunately the second time up the hill did me in and she got ahead.  I kept her in sight but she was definitely gaining distance and in the end I finished with the equally lovely 36 – my time as per watch was 35:49 and my official time (including 18 seconds of standing still) was 36:07.  Which is fine – I wasn’t really in the mood for a PB attempt and I have a bit of a sore toe.  I was happy to just enjoy the parkrun this week!

My watch now says I am “productive” again so let’s hope I go on to produce a decent half marathon this time next month.  And that my toe does not fall off.

One thought on “Raphael parkrun”