In 2017, a man named Ben Robinson ran a parkrun in twelve minutes and twenty four seconds, thirteen seconds faster than the world record for the equivalent distance on a running track.  How did he do it?  With the assistance of a dog, of course!  Ben Robinson is a canicross champion, which means he competes in proper serious races with a dog harnessed to his waist.  These dogs are bred especially for the sport – they are lean and strong and love to run.  One of Ben Robinson’s dogs is called Bolt, which I think just about says it all.

I do not have one of these canine running machines at my disposal, and I think that if you tried to strap me to a dog that can run 5k in 12 minutes all that would happen is that I would fall flat on my face and be dragged flailing round the park.  What I do have at my disposal, however, is a small, white, fluffy Bichon Frise named Cookie.  Cookie has one thing in common with Bolt in that he loves to run.  Admittedly, the similarity probably ends there.  Cookie looks like butter wouldn’t melt in his mouth, but looks can be deceptive.  He is wilful, easily distracted and prone to selective hearing.  He usually behaves himself for his owner, Emy, but when he’s with me he treats me like the soft auntie that lets him get away with murder.

When I first started taking Cookie out five years ago he was just nine months old.  I tried taking him for a bit of a run then, but it ended in chaos.  He thought it was a great game to try to run round me and tangle me in the lead and to move from side to side causing me to trip over him.  I gave up until recently.  Now Cookie is five, he is starting to mellow a little, and I tried the procedure again with better results.  First I injected little spells of running into our walks, then started him on “intervals” (running one side of the little park near his house, walking back, repeating the procedures), then running the whole square.  Dog Basket to 5k!  For Christmas, he presented me with an Amazon voucher (Emy said he had been saving his pocket money all year) which I duly spent on a fancy canicross lead just like Ben Robinson has.  Okay, probably not exactly like it.  But that sort of thing.

Today was our first proper run together!  I took him to his favourite park, Lloyd Park.  I don’t usually run in Lloyd Park because there are a lot of people and non tarmacked paths but I worry about taking him to the marshes because they are a bit deserted and I don’t know if he would be a target for dognappers.  (Note I am never worried about my own safety there, just the dog’s!)  Lloyd Park on a sunny half term day probably wasn’t the best idea, because there were a lot of distractions.  Cookie ran well for the first kilometre, he was actually out ahead of me and although he wasn’t exactly pulling me on he didn’t seem to be impeding me either.  The belt round my waist felt a bit weird at first but I soon got used to it. 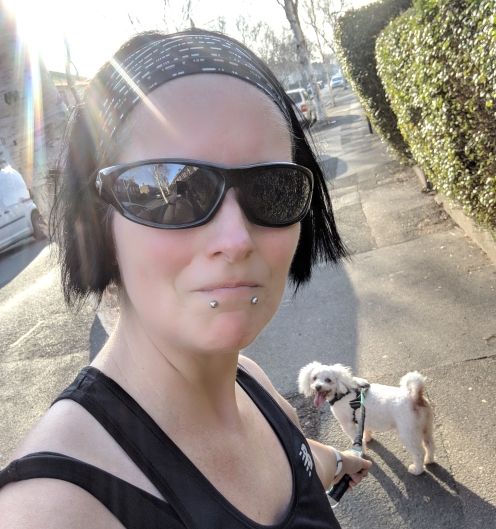 Like all novice runners, though, I think Cookie set off  a little too fast and got tired and after about ten minutes he started getting very distractable and pulling up repeatedly to sniff trees, fraternise with other dogs and just behave in a generally random way.  He has a tendency to flit from side to side which meant I was constantly rotating the lead to prevent us turning into a big tangled mess and falling over.  I imagine it is very good training to try to keep running in one direction whilst a obstreperous Bichon Frise tries to pull you in another.  My mind suddenly filled with an image from a documentary I watched about Usain Bolt, where he runs across grass heaving a tyre behind him.

At the end of the second lap, Cookie was approached by a labrador named Arthur and point blank refused to continue running until they’d had a good sniff of each other’s behinds.  I took the hint and decided not to persist with this exercise for another lap, and called it a day at just over 3km (which took the best part of half an hour – he does nothing for my pace whatsoever).  Hopefully we can make it three laps next time, which will be the equivalent of a whole parkrun, and then maybe we can graduate to an actual parkrun.  Barking parkrun, of course.