After I posted yet another “medal wanker selfie” to Facebook, my non-running friend Alexander asked somewhat incrediously what I did with all those medals.

The answer to this question is that I hang them on my door handle for a while and then put them in a big plastic crate which I keep under my bed.  Even though there are rather a lot of them, they don’t take up a lot of room, compared, say, with books/clothes/CDs.  In fact my make up collection takes up nearly as much room and I hardly ever wear make up now because I’m always out running.

Anyway, this question inspired me to go through my medal box and write a post about some of my favourite medals.  Every single medal in that box has memories attached, some make me smile, some make me wince, some bring back memories entirely unconnected to the race.  Here are some of the best: 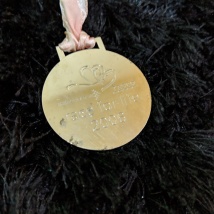 This was my first ever race and my first ever medal.  Long before the inception of the medal wanker selfie, the best I could find was this picture of me drunk on the train home later that evening, after attending a barbecue still wearing the medal. 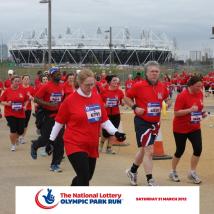 A five mile race in the Olympic Park long before it was open to the public.  Entry was via a heavily contested ballot, in which I was the only person I knew who got a place, much to my chagrin of my friends who actually bothered to go running occasionally.  I fully admit that I entered this with the main purpose of having a nose at the Olympic Park before it was finished.  This was the first time I ran those paths that were later to form the Chase The Moon route.  It nearly killed me!  I can now run a 10k quicker than I ran this.

My first proper 10k central London race!  I loved every minute of it.  Mo Farah won the race, and I was 10440 out of 10520 in a time of 1:38:25 (!)   It was boiling hot and some workmen in the city started cooling us down with hosepipes, which seemed great at the time until I remembered I had my mobile phone in my pocket.

It is kind of nice to know that even though I am six years older now I can run 10k at least twenty minutes faster, although this is more down to being twenty-five kilos lighter than anything else. 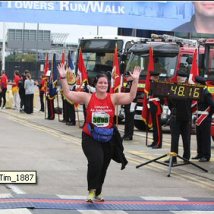 This sadly now defunct 5k started by Southwark Park and took you through the Rotherhithe Tunnel and through Poplar, ending in the shadow of Canary Wharf.  It was organised by the Firefighters’ Charity and was popular with my fellow emergency workers employees, many of whom would run in uniform, carrying a Resus Annie on a stretcher, or something else equally PB inhibiting.  I recall running most of this race trying to keep up with a bunch of riot police with full riot shields, truncheons, etc.

I’ve chosen this medal because instead of being attached to a ribbon like all the others it is attached to a piece of firefighter’s hose!

This is the point where the worm started to turn.  The weight is gone, the rubbish boyfriend is gone and I’m actually starting to train for races.  That said, this is a bit of a rubbish half marathon, it’s a rubbish medal and I got a rubbish time.  But it is where it all began, and that is why I can only think of it fondly.

To be honest I found looking at this so soon after my Olympic Park fiasco quite painful.  This remains the pinnacle of my running career, if not my entire life, and I am not sure I will ever get back there. 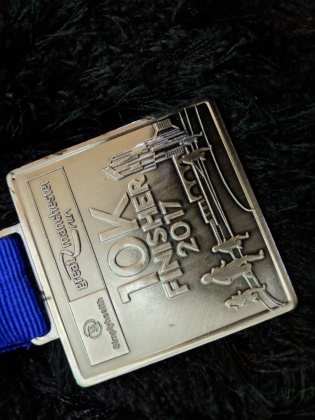 I spent most of 2017 injured, pulling out of races and being fobbed off by doctors, but I did manage to pull myself together for long enough to hobble round the Great Manchester Run in 1:21:33 (more than 5 minutes slower than my times in 2016).  I was so pleased that I managed this as a visit to Manchester has always been on my bucket list, and even though my own performance was unspectacular, I got to see both Manchester football stadiums close up and watch the gorgeous Jonnie Peacock race, as well as eating an Eccles Cake in Eccles and riding the entire length of the tram route using a yellow travelcard.

Aesthetically speaking, this is my all time favourite medal.  It’s a yellow and black glittery bottle opener.  What more can you say?

I have included this one mainly because I came seconds away from missing the cut off and going home without it, and thus will treasure it forever.

Starting with my first ever RunThrough race, a 10k in Victoria Park on Easter Friday in 2017, through to a Hyde Park Chase The Sun medal from last year’s scorching summer, to my most recent medal for Chase the Moon in the Olympic Park with the new “sophisticated” design.  I have tons of RunThrough medals and they’re all great quality and reflect the light hearted nature of their events.  I can’t thank RunThrough enough for what they do, their friendly team have always encouraged me no matter how slowly I run and their events have turned into my social life as well as my exercise!  I have made so many friends there and can’t wait for another summer of sun chasing!

I haven’t included either of my marathon medals because they’re framed and hanging on the wall, but I’ve included this one to sum up my busiest year of running so far.  I’m trying to better that this year with a target of 1,000km.  This, of course, relies on me not injuring myself and spending the entire summer on the bench as I have done for the past three years in a row.