My fascination with the Barcelona Half began in June 2016, when an ex whom I had been planning a trip to Barcelona with unceremoniously gave me the elbow.  “Sod him, I’ll go anyway” I said to myself, and when I spotted that Barcelona had a half marathon, this seemed an ideal time to go.  Unfortunately, with two weeks to go it was apparent that I had not recovered sufficiently from my injury (the one to my leg, not my ex giving me the elbow) to have a hope in hell of getting round, so I pulled out.  There were tears.  I was beginning to believe that Barcelona was cursed and I would never get there.

Fast forward a year and this time there was a hope in hell of me getting round, albeit not a very strong hope.  I decided to give it my very best shot and to at least make a holiday out of it.  Three days ago I arrived in Barcelona.  The night before the race, I visited the start line, near the Arc de Triomf, something I’d seen on YouTube videos so many times.  I couldn’t believe that I was finally there.  I was excited to be taking part in the Barcelona Half, but one thing was dampening my excitement – I wasn’t entirely convinced that I would be finishing it.  My maths is better than my running.  I knew that I’d have to pull something out of the bag to get round faster than the sweep up coach.  I just prayed the running gods were on my side, like they’d been in Brighton in 2016.

Unfortunately, there was no such luck this time.  It just wasn’t a good running day.  Nothing catastrophic happened, but both my legs were a little tight, the weather was a lot warmer than a normal Barcelona February day (not hot by any means, but very sunny, and very different to Walthamstow in winter), the terrain was too flat (honestly) and (probably most significantly) I slept terribly, haunted by dreams of the coche de cierre.  The atmosphere at the start was quite intimidating.  Spanish runners don’t look like English ones!  They are all arms and legs.   They wear tiny little vests and shorts and then they cover the rest of their bodies in arm warmers, leg warmers, buffs, belts and visors that makes it look like they are prepared for some kind of hideous multi terrain triathlon, not a city half marathon.  The corrals were very quiet, with people warming up by jogging in circles, and I started to feel very out of place.  My wave, the last, was for 2 hours plus, and of course as soon as it set off I couldn’t see most of these people for dust.  It only took a couple of kilometres to get that “back of the parkrun” feeling.  I knew this would happen, of course, and just tried to enjoy the sights. 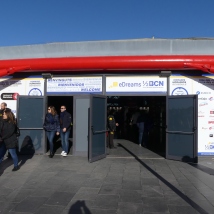 The exhibition/number pick up at the Expo

Visiting the finish line the day before the race 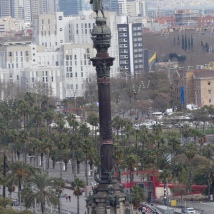 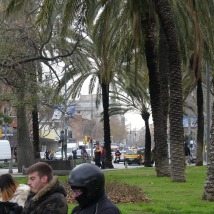 The beginning of Parallel Avenue

Gran Via, about 5km in

Marina – the view that greeted me at 19km (not pictured: coche de cierre)

Parallel Avenue!  Or whatever is it called.  I have to say something about this awful goddamn road.  First of all, it is very boring and could be anywhere in the world.  Secondly, no one needs a road that goes gently uphill for three kilometres.  Just  do it all at once and have a proper hill.  Also, having made us run up this goddamn thoroughfare, why not let us run through Placa Espanya as well?  It is so close and would make for great race photos.

After Parallel there was a long slightly downhill stretch on a slightly more interesting road with some nice theatres and modernista buildings on it.  The slog of the Parallel had already dented my pace though, and I started to feel decidedly uncomfortable and dispondant.  My head flooded with negative thoughts such as:

But then suddenly I realised we were headed for the Arc de Triomf just like in all the pics in the internet and I stopped being quite so negative and decided just to plunge on with it and keep going.  I realised that I was going to have to take walk breaks, and this would almost certainly mean getting caught by the coche de cierre and not getting a time or a medal, but a half marathon is still a half marathon so long as you have the Garmin activity to show for it.  I slowed my pace to approximately 8:30, alternating roughly 2 mins of running with a minute of walking.

At 13km I saw it.  The coche de cierre.  It was not just a car, but an entire convoy, a car followed by a coach full of mournful Run Failures, followed by an ambulance, a police car, several motorcycles and, most destroyingly, a big white van which stopped at each kilometre marker to take it down and throw it in the back.  Now I’d seen it, of course, I knew exactly how fast I needed to move to keep ahead of it, so this made my course a little easier.  For the next five kilometres that bastard thing chased me down the road but I refused to let it get ahead.

Unfortunately, I hadn’t bargained for the seafront section, where suddenly I was running into the wind and the temperature rocketed to 22c (as per my Garmin Tempe).  At 17.8km the coche de cierre overtook me.  I gave the coche driver a pleading look (please wait for me) but he shook his head and said something in Spanish or Catalan which I didn’t understand but took to be an invitation to board the bus of shame.   I decided to play dumb and took to the pavement.  After all, he couldn’t physically stop me running.  On the pavement I was just someone going for a run.  Along the Barcelona Half route.  Wearing a race number.  Behind the coche de cierre. I followed close behind it and watched as the white van removed the 18 and 19 kilometre markers.

Then we turned off the seafront into a road called Marina and something incredible happened.  The first thing was that I saw the Sagrada Familia looking like something out of a fairytale on a hill at the end of the road.  I hadn’t known this was a feature of the route and it really made me remember where I was, and how long I had waited to do this race.  The second was that lots of spectators and fellow runners were lining the route, cheering and encouraging me in enthusiastic Spanish that I understood without knowing any of the words.  Those runners who I had felt so out of place with earlier on were not mocking me for gatecrashing their elite race – they were cheering me on like I was Florence Kiplagat.  I reached 20km before the van could pack it away. 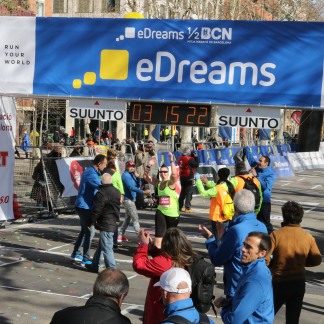 As I turned the corner into Pujades, I passed the police, the ambulance, the motorcycles and finally, with 500 metres to go, I passed the coche de cierre.  Admittedly I think it had had to slow down so as not to run over the finish line photographers, but who cares?  As I crossed the finish line, in a horrendous time of 2 hours, 56 minutes and 20 seconds, a group of  half marathon staff gathered around me and gave me an enormous cheer.  Someone put a medal round my neck and I couldn’t believe I’d actually earned it.  It had been a shambles.  I am a terrible runner.  But I did it and I was going home with the medal that I’d been dreaming of for the last two years.  There were tears.  Again.

One thought on “Barcelona Half Marathon 2018”