One thing has been missing from my training routine ever since the marathon: the Long Slow Run, the solitary plod down the banks of the Lea Canal, with change jangling in my pockets, puddle water in my socks, and occasionally a Yellow Belly hanging from my mouth.  When I started running, these jaunts were what it was all about – not, heaven forbid, interacting with other runners – so it’s a bit strange I have let them slide completely.

I am determined to learn from my errors in marathon training and get a decent time in at least one of my half marathons next spring, so I’ve been looking at ways to get the most out of as little mileage as possible, and have been stalking the Strava profiles of brilliant distance runners, people like Paul Martelletti and My Friend Nic Who Is Doing Marathon Des Sables.  I have noticed that in general these people really aren’t scared to make their long slow runs really really slow in comparison with their races (although obviously still really quite fast in the general scheme of things).  My long slow runs are only really slow because I get knackered and have to slow down, and the good ones aren’t really much slower than my 10k pace.  To be honest slowing down doesn’t sit well with me.  I’m ALREADY slow.  Why do I have to slow down more?!

Anyway, I set off today determined to keep slow, aiming for an average pulse of 150 and set my watch to beep angrily at me if it got higher than 160bpm (a figure I plucked completely arbitrarily out of thin air).  Setting off felt very odd – not only because I was holding back but because I found myself involuntarily adjusting my gait to a bouncy sort of lollop with flexed feet.  I didn’t set the watch off all the way to Springfield park though, and my pace was vaguely faster than walking, so I think I got the hang of it.

At Springfield Park I stopped trying to run slowly and did two loops of “The Peanut” which is a Strava segment that caught my eye, apparently popular with the sadistic leader of a certain local running club.  The Peanut is a peanut shaped (funnily enough) kilometre loop of the park which includes a very steep up, a fairly steep down and a nice assortment of flat bits and undulations in between.  (I would love for this to form part of a future parkrun).  This made my watch bleep constantly but I had no idea how to turn it off without losing the whole thing so I ignored it.  I liked running The Peanut very much, but I was already on six and a half kilometres by my second time round so I thought I’d better pack it in and plod back home. 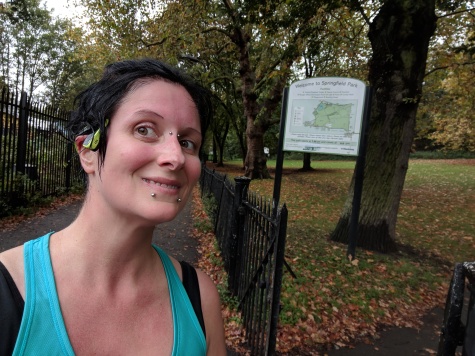 You can tell it’s a long time since I’ve been out running on my own because I completely forgot what a state the Lea Towpath gets in after rain.  A large portion of my run home turned into a walk because I was trying to keep my feet dry (not terribly successfully).  This made my watch beep too, because my heart was not going fast enough.  I spent half the time swearing at puddles and the other half swearing at my own wrist.  Next time I will go another way, and/or not bother with the extremely annoying pulse alerts.

Here is a Relive video of said run.   11.1km, 1 hour 39, average pulse 151.  It felt quite easy, so I think I will be repeating this exercise soon, perhaps with a couple of extra peanuts.