I re-followed the Brighton Marathon Virgins Facebook group the other day.  I unfollowed it a couple of months ago, partly because of some annoying comments from self appointed experts (who have no right being in a beginner’s group in the first place) but mainly because I was looking at other people’s distances and times and feeling totally inadequate.  The group seems to have changed quite a lot since I read it last – there is a lot more talk of injuries, some people have had to pull out on medical advice (oh how I feel for those people), most people have missed a long run somewhere and suddenly my mileage seems fairly average for the group.  My pace is still way below average of course, but at least I have a target that I think I can either achieve or come close to.  I won’t be  disappointed if I take over six hours but I will be absolutely over the moon if I take under six. 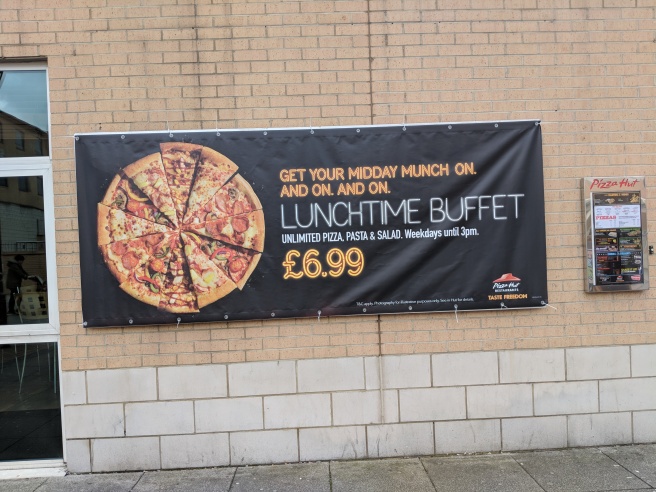 I am also absolutely ravenously hungry, all the time.  This is known as “Runger”.  I try to eat healthy stuff most of the time but in all honesty there isn’t a lot that I wouldn’t eat and I keep getting distracted by rather less healthy choices.  Yesterday I went to the physio and noticed that it was next door to the Pizza Hut All You Can Eat Buffet.  I only had twenty minute to spare so I thought I’d just get myself a huge healthy plate of salad and a slice or two of pizza.  I demolished the salad in seconds and six slices of pizza soon followed.  I honestly could have eaten every pizza in the shop so it’s a good job I had to leave or I might have just eaten so much pizza that I turned into a spherical blob that could be rolled round the marathon.

Rather surprisingly I have not gained any weight despite the constant eating, but I haven’t lost any either, even though my Fitbit says I burn over 3000 calories most days and nearly 5000 on long run days.  I think my body shape has changed a bit and I look a bit like Geoff Capes.  It isn’t a good look really.  I don’t recommend marathon training as a weight loss or body shaping tactic.  Not that that was among my reasons for doing it, but it wouldn’t have been an unwelcome side effect.

I went on a 10km walk/run with a bit of jogging and some hill sprints in Springfield Park this morning.  I am full of cold and my legs are still quite leadlike so it wasn’t very impressive and then it started to rain so I wished I hadn’t bothered.  To be perfectly honest the main point of this exercise was a contribution my “100 miles in a month” medal.  I should have just half heartedly jogged to the station every morning and counted that instead.

One thought on “Runger”