Today was my 20th parkrun and my 13th different event.  Beckenham Place Park had ade it to my to-do list despite being flat, grassy and devoid of hills because it happens to be a ten minute walk from the house where I grew up and where my mother still lives.  When I was a teenager, I had a little dog named Kipsy, a cross between a Jack Russell and a toilet brush.  Kipsy and I spent many hours in that park, she would climb trees and swim in the river and then shake her muddy fur all over me.  I loved that annoying little dog more than anything in the world.  So a return to Beckenham Place Park was almost a visit to the Ghost of Kipsy.

After running in the snow at Wanstead Flats, I had purchased some shiny new trail shoes and was looking forward to trialling them in the mud and grass at Beckenham.  However, as I was sitting on the train there I saw a message on Facebook – “We’re trialling a new course today, as it is too wet to run on the grass.  It’s all tarmac!”  Of course, in my state of full blown maranoia the thought of running 5km in the wrong shoes sent me into a spiral of panic.  My legs would fall off!  For some reason no one seemed to sympathise with my predicament.  #firstworldparkrunproblems, apparently.  In the end it transpired that the grass free course was actually still pretty trailly and the choice of shoes was fine.  All’s well that ends well, etc.

Personally, I preferred this course to the normal course (or the sound of it) – it has a bit of a hill for a start!  The start is the same for both courses (although I think I heard someone say they normally run in the opposite direction?)  – in the field near Kipsy’s river, not far from Ravensbourne Station, then a completely flat stretch along the river on a good quality trail path, turning across the field and over the railway bridge into the woods (the normal course does not cross the railway and instead runs alongside it).  In the woods there were quite a lot of mud/puddle/trip hazards but there was also a lovely hill!  We had to be careful not to get in the way of faster runners lapping us as it was quite narrow in places and everyone was aiming for the least muddy parts of the path.  There was a small expanse of tarmac at the steepest park of the hill, which sadly didn’t last long, and then a downhill to the park’s exit, where we ran along the pavement for a little while.  The end of the lap was downhill and back into the park – quite a pleasing sprint finish.  The normal finish is where the start is, so would involve a little more flat pathway.

The new finish area, which is part of the normal route

Part of the alternative route 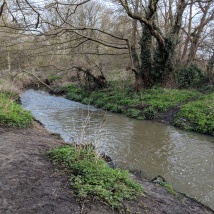 On the second lap we were quite a long way behind the other runners but luckily had the company of the tailwalker, a lovely lady named Jane.  Jane had been tasked with collecting the cones used to mark out the course, and there were a LOT of cones.  Someone was obviously taking no chances and had used them to mark out every puddle and trip hazard, including a five metre tall lamppost.  Mysteriously, we kept finding cones that seemed to have been kicked or thrown off the course – one down a wrong turning, one in the bushes… it was quite baffling until I turned a corner and saw a man walking three black labradors.  One of the labradors was shuffling a cone with its nose.  Culprit identified.  This is definitely the sort of thing Kipsy would have done if she was still with us.

Our finish time was 54:08 (which gives my mother an age grade of 42.49%, roughly the same as what I get running at my own pace) and lots of volunteers were waiting at the end to give us a warm reception in the freezing cold.

I suspect this won’t be a parkrun I am rushing to do again (unless my mother gets the bug and asks me to) because of the lack of decent running surfaces and toilet/shop/cafe, but for anyone who likes trails and doesn’t mine peeing in a bush I would highly recommend it.  It’s a lovely park that feels a lot more country-like than it should for its London/Kent borders location.  And should you try it, look out for a ghostly little black dog by the river, shaking her wet fur in your direction…