Yesterday was my penultimate Long Run before the marathon (which is now just TWENTY FIVE days away).  I couldn’t decide whether to run along the Thames Estuary (from Shoeburyness to Leigh on Sea and back again) or the Thames Path (from Putney to Hampton Court) so I threw the question to a Facebook poll.  The Thames Path was the runaway winner, with 76% of the vote.  So I pulled on my running clothes and caught the tube to Putney Bridge.

The first 3km of my run was through Bishop’s Park (which is where Fulham Palace parkrun is held) and along the north bank of the Thames to Hammersmith Bridge.  This bit is all paved, although it’s paving stones rather than smooth concrete and there’s a bit of nasty camber in the park.  There’s also a couple of small diversions inland (one taking you past Fulham FC).  Once past Hammersmith, the north bank is riddled with diversions, so I crossed to the south bank, which is an entirely different beast.  It’s a tree lined trail path and doesn’t feel like park of the city at all.  Initially, the going was quite good for trail.  I had come prepared for the “walk/run” thing this time and had set a timer to instruct me to run for four minutes and walk for one.

At Barnes, the trees stop for a bit and the tarmac path resumes alongside the road.  (Note for anyone planning on trying this route: Barnes is the last opportunity to visit a shop until Richmond, so it would be a good idea to get some water here.)  The next section of path has some weird cobbles and a lot of big puddles.  It’s steadily downhill from here.  That’s a metaphorical downhill, the Thames Path is completely and utterly flat.  Don’t think that makes it easy though.  There is a long loop around Kew Gardens and Old Deer Park where the going is pretty nasty and unsuitable.  Lots of mud, giant puddles, stones and potholes.  Apparently at certain times of year it is completely flooded – today it was merely boggy.  I took to Facebook to record a “running selfie video” and tell the people who had sent me down this path in no uncertain terms about the unsuitability of their choice. 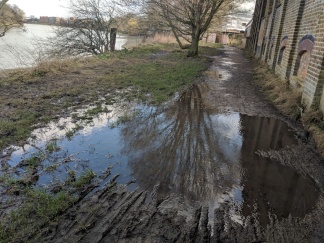 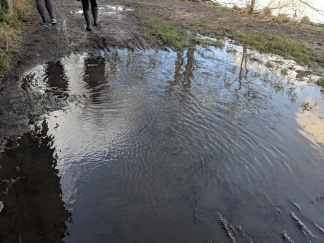 Richmond felt like it would never come.  I was pretty thirsty by this point (see above comment about there being no shops after Barnes) and my feet were aching for some proper terrain.  When finally the tarmac path crept in and Richmond Dock appeared on the horizon, I felt over the moon, and stopped to celebrate with a bottle of mineral water in the Slug and Lettuce.  I was just over halfway.

I resumed the run shortly and headed into new territory.  Last year I walked the Thames Path from Putney to Twickenham, but a) it had been summer b) you don’t notice bad terrain as much when walking c) I stuck to the north bank after Richmond, but it fizzles out at Twickenham so the south is the only option if you are carrying on.  There was a nasty shock for me in store.  The tarmac was not a permanent fixture!  It stopped at Ham, and the trails were even worse than back at Kew!  A lot of it was only just about walkable, let alone runnable, and I ended up gingerly tiptoeing through the mud and through bramble bushes to preserve my pristine white trainers.  As I was doing this, I noticed a lot of smug trail runner types coming the other way, splashing through the puddles without a care in the world, loving every second.  If I did that I would fall over and drown in the mud.  I don’t get trail runners.

Thankfully, on the approach to Kingston there is an option to take a second path slightly away from the water’s edge that starts off as a better trail and turns into tarmac.  (Kingston parkrun is somewhere round here but I had lost my bearings a bit so not quite sure where).  I reached 20km on this path, and decided to take a little stop off in Kingston.  Which turned into a slightly longer stop off as I sat in Starbucks with a massive orange juice (I really fancied an orange juice, ok?  At least it wasn’t a carrot cake) and then decided to buy a cheap top from H+M for the journey home and got totally lost in the Bentall Centre’s unnecessarily complex escalator system.

Fatigue was definitely starting to set in at this point – I could happily have walked the whole of the remaining 6km but compromised by changing my timer to two minutes run/one minute walk.  I could tell that my head was starting to go a bit funny at this point because I kept seeing clumps of leaves etc and thinking they were sinister looking animals, and also thought I saw a sign saying “Beware of Trams!” and got confused because there are no trams in Kingston.  It actually said “Kingston Upon Thames”.

The last section of path, from Kingston to Hampton Court, was actually pretty good, a combination of tighly packed sand type trail and concrete (though there was the cruel and unnecessary addition of SPEED BUMPS at the Kingston end.  Each felt like a mountain.)  The sun was starting to set (yes it took me that long) and bathed in a golden light, the Thames, with posh houses on one side and Hampton Court Park on the other, looked suddenly beautiful.  Or it might just have looked that way because it was nearly the end.  I turned a corner and there it was, the majestic Hampton Court Palace!  I’ve never actually seen it in real life before. 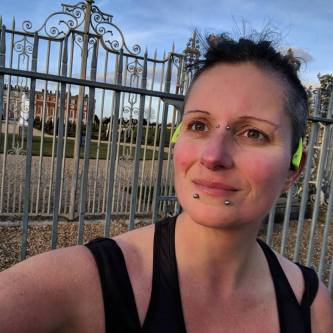 This marked the end of my 27km escapade down the Thames and all that was left was to take the train back home.  It amused me how London had become progressively posher throughout my journey – outside Putney station there had been a bunch of smoking scrotes who wouldn’t get out of my way, at Hampton Court station the man in the station shop was engrossed in a discussion with some public schoolboys about transgender rights and whether Caitlin Jenner is a good role model.  I bought a banana milkshake and got on the train.  Good god, it was a long way back to where I had come from.  It felt further riding back than it did actually running it.  I think that’s got to be a positive sign?