Gone are the days when New Year’s Day was a hungover write off, sacrificed unto the cause of downing multiple tequilas in a dubious establishment to toast the first hours of the oncoming year.  New Year’s Day is now the day of The Double, the only day of the year when one can record two parkrun results due to staggered starts and diligent runners scuttling across town as fast as their trainers can carry them.  According to Facebook, some people have gone a bit further and actually performed THREE parkruns, although the third doesn’t officially count.  The most common combo was Peckham Rye (9am), Hilly Fields (10am) and Catford (10.30am) – the runners that managed this were all around the 20 minute mark, and most were still a bit late for Catford.  Even more impressively, one plucky runner managed to complete an international double, starting in Brisbane and ending in Vancouver.

I was less ambitious and decided to tick off two Sarf Landan parkruns that I haven’t yet conquered: Greenwich and Bexley.  Greenwich parkrun wins the prize for the most misleading name: it is in the London Borough of Greenwich (just) but it is nowhere near Greenwich town centre and it is certainly not in Greenwich Park.  Instead it is in Avery Hill Park, in Eltham.  The park itself is lovely, and as always the team and fellow runners were a great bunch, but course-wise I didn’t rate this much – in fact I found it quite frustrating as spend all three laps mentally drawing out a better course.  It starts at the top of a small hill, on some grass, then ducks annoyingly on and off a tarmac path until it reaches a slippy slidey downhill.  The tarmac path was tantalisingly close throughout and I was so tempted to take a long-cut to avoid the grass, but (unlike at Hilly Fields) no one seemed to be taking this option and I didn’t want to look like a parkrun rebel.  The second half of the course was better (a tarmac flat bit and uphill) but time lost on the uphill couldn’t be made up on the downhill because of the slippy grass and I found myself getting the right hump with the unintuitiveness of the course planning and getting slower and slower with every kilometre.  I had always planned to do this one at a relaxed pace but my idea of how long a relaxed pace run would take turned out to be somewhat ambitious and I finished in 38:15.  At least it was a bingo number.

There was no time to reflect on this as my long suffering friend Jason, who had been nominated as official parkrun ferry, bundled us all in the car and took us to Danson Park for Bexley parkrun.  Unlike Greenwich, this one has been hovering round the top of my to-do list for some time.  It’s one of the larger parkruns and has a nice inclusive family and snail friendly atmosphere, which also means it is not a place to get a PB even though it isn’t a particularly difficult course.  The turnout for New Year’s Day was even higher than usual and the first kilometre was basically a shuffle at walking pace (I was determined to keep my legs turning over at running cadence but they weren’t actually taking me anywhere).  As we came around the lake things thinned out a little, but I still would have had to barge through a lot of people to make any decent progress and to be honest I had neither the energy nor the inclination so continued at Long Slow Run pace.  The longer I did this the closer the resemblance between my legs and lumps of lead became.  Bexley turned out to be similarly unergonomic with the uphills on tarmac and the downhill through some muddy woods. 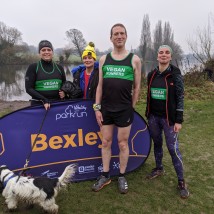 When (eventually) I reached the finish I found all hell had broken loose because not only had the record attendance used all the tokens, it had used all the playing cards and raffle tickets that the volunteers had brought as a contingency plan.  A volunteer wrote my position and barcode down on a piece of paper and promised to do the best to record my time though truth be told I would have been quite happy for my finish time to get lost altogether, although not the fact that I had completed the parkrun.  My result appeared much, much, much later (no doubt after those poor volunteers had spent a long time juggling playing cards, twigs and barcodes) and was slightly faster than what my watch said, but I didn’t complain!

This isn’t usually a blog of my culinary experiences but I do feel I have to share a paragraph about the shambles of an establishment that is the Danson Stables.  It’s such a shame as it’s a lovely building and could have been a great spot to toast in the new year.  The pub wasn’t exactly packed, but they seemed to be caught completely unawares by a few parkrunners trooping in (despite the fact they have a parkrun every week and every New Year) and it took over half an hour to get served at the bar despite the deceptively short queue.  After this long wait, we discovered that the beer we all wanted was off and several of my friends decided they had had enough and went home.  The rest of us persisted and ordered a different beer.  I ordered a meat-free platter (£13) which I paid for with a £20 note.  The bar person informed me that she only had 20ps in change, so I said I had better have my change in 20ps, and she asked me if I was sure, as if I had any choice in the matter.  Perhaps she expected me to just say “oh never mind keep my seven quid then, I’d rather throw money away than have a jangly purse”.   When I sat down I found we had been given two pints of lager instead of two pints of pale ale but the thought of going back to the bar and trying to procure what I actually wanted made me lose the will to live.

Ten minutes later a server appeared and told me she was very sorry but actually they were out of meat free platters.  She gave me my money back but did not offer to rectify the 20p situation.  I am still spending the fucking things.  I will never be short of change for a locker at the Oasis Centre again.  We finished our lagers and Jason drove us to Wetherspoons.