It has done nothing but rain for months and I am sick of it.  I can’t even remember the last time I went out for a run and came back with dry feet.  Even last week’s 100% tarmac parkrun venue, Peckham Rye, included an unexpected water feature.  The soft sarf-landaners of Peckham weren’t as hardy as the people of Derby, and when they came to the voluminous puddle, they all ground to a halt and stared at is, as if it would go away if they looked at it long enough.  The break in my stride was enough for me to lose momentum and find myself unable to leap over the puddle, so I ended up with saturated feet.  This, combined with some idiot who decided to do a sprint start with a pushchair right into my right ankle (my good ankle, or at least it was) made for a less than lightning speed kind of parkrun and I was very surprised to find myself finishing in 35:52.

The very next day I found myself on Wimbledon Common for the RunThrough Christmas extravaganza.   There were several reasons I signed up for this (festive Wombles, free mince pies and seeing all the regulars in their festive nonsense) but the prospect of a trail course in December wasn’t one of them.  The Chase The Suns over the summer had lulled me into a false sense of security and I’d forgotten how bad Wimbledon in the wet can be.  From the word go, it was squidge, squelch, plop… vast expanses of mud which looked like it might suck you up like quicksand.  Some runners made a valiant effort to find a alternative route via roads, pavements and a golf course but it soon became apparent that to continue this ploy we would have to make it a half marathon via Kingston and the A2 which is not conducive to anyone’s continued health.  While most of us shuffled at walking pace through the least squidgy bits, some others decided to take the plunge and go knee deep through a swamp, gleefully splashing those they passed and the long-suffering resident photographic Womble.  These people would proceed to be unbearably smug about their antics on Facebook later.  They are the same sort of people who look down on people who run with headphones because they just like to “enjoy the atmosphere and listen to birds tweeting” and label their 40 minute 10k “Slow chatty jog with Dave”. 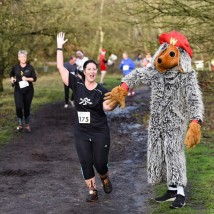 I sploshed my way to the finish in 40:22, which was my slowest 5k for about a year, although it was still faster than the time I fell over at Victoria Dock, and I would probably have knocked ten seconds off that if I’d paid more attention to running and less to posing with the Womble.

The final squidge of the year (unless Dulwich tomorrow turns out to have an unexpected influx of water) was the Christmas Day edition Beckenham Place parkrun.  All I can say about this is that I can’t wait until they move on to their new course (it hasn’t been revealed yet, but it will start and finish by the mansion so I think this must mean hills, tarmac, trails and little/no grass).  I just don’t enjoy running on grass, particularly slippy, muddy grass.  I find it highly precarious and live in fear of turning an ankle and that don’t make for an enjoyable run.   I did my good deed for the day when I helped a fellow runner fish his trainer out of the mud when it came dislodged (rather like my own experience in the Bog of Doom), an incident which entirely summed up the suitability of this parkrun.

It didn’t take me quite as long to finish this as it did Wimbledon, but my time of 37:32 had me four places from last, and two of those places went to the tail walker and Rob, who had turned up just as I had started my second lap and still nearly managed to overtake me.  This is one of two occasions that I have beaten Rob at parkrun; the other time was when he was walking and I was running and even then I only beat him by two seconds.

The only way to wash the mud off was with a dip in the Beckenham Place Swimming Lake.  There was a surprising number of crazy people who thought that leaping into murky 6c water on Christmas Day was a great idea.  Because I was in a bit of a hurry (and because I hate getting in and out of my wetsuit with frozen fingers) I decided to take the plunge in just a swimming costume.  I lasted ten very chilly minutes in the water and Rob lasted a whole ten seconds.  He was very quick to point out the composition and arrangement of the female body is far more geared to this kind of activity than the male.

One thought on “Mud Glorious Mud”