To think that three years ago I thought going to Chelmsford for the sake of a parkrun was excessive!  This week I packed my bags and headed to sunny Poland to visit the parkrun tourist Mecca of Zielona Gora, one of only four parkruns to start with the letter Z.  Since the parkrun began nearly a year ago, this sleepy Polish town, around the size of Kettering, has had a steady stream of English visitors in cow cowls, much to the bewilderment of the locals.

Zielona Gora is relatively cheap and easy to get to, unless you live a life of calamity and disaster like me.  There are several airports that you can fly into and then catch a train into the city.  We chose Ryan Air flights to Poznan from London Stansted, which cost £80 plus baggage charges (pretty hard to avoid on Ryan Air, unless you don’t mind wearing the same clothes for 48 hours).   I’ve heard that most people have a smooth journey on this route.  We did not for the following reasons:

Finally, we got to the restaurant in Zielona Gora (La Gondola) to find the people we were supposed to be having dinner with polishing off the last crumbs of their 50cm pizzas.  As no one had eaten anything of any nutritional value all day we stuffed our faces with more 50cm pizzas (with cheese removed) and washed everything down with £3 cocktails which were more or less pure tequila. 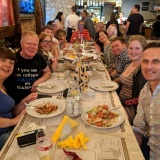 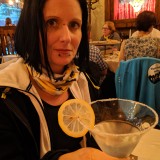 Google said it was a half hour walk back to our apartment on the outskirts of town, near the parkrun, but this was not accounting for the fact that one of the major routes from one side of the railway line to the other was closed for roadworks.  Over the course of the weekend, Camilla and Ken found increasingly daring ways to circumnavigate this obstacle while Rob and I opted for Going A Really Fucking Long Way Round instead.  (I am used to non-direct routes by now.  See: Mole Valley.)  Eventually we found the flat, and it only took six tries (and waking half the building by accidentally pressing their buzzers) to gain entry via the keypad!  Thankfully, the flat was lovely and very comfortable.  I slept like a log.

I woke feeling very glad that the parkrun was a very short distance from the flat and relieved that we would not have to dabble with Polish public transport to get there.  It is located in forest land (not an actual park as far as I can tell) just behind the  MOSIR waterpark and McDonalds (probably your best bet for a toilet and post parkrun refreshments).  We were very relieved to see the familiar sight of a parkrun flag and a gaggle of apricot t-shirts and cow cowls.  There were a total of 77 people at the parkrun – 23 in our group and as far as I could tell the rest  were locals (or at least, they had Polish names.  I don’t know if parkrun tourism is a big thing for Polish people…) 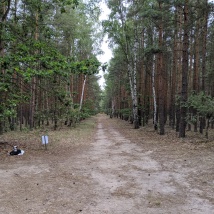 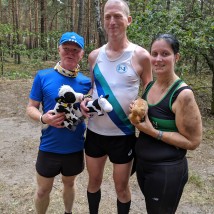 The course is quite simple – a circle with a small out-and-back extension.  It is well signposted and there is not much chance of getting lost unless you miss a sign (I didn’t see any marshals on the course).  Visually, it reminded me of the trail section of Bois du Boulogne  – dense corridors of tall pine trees.  However, it is unlike BDB in that it is completely flat – probably as flat as Hackney Marshes – and more importantly that the trail surface is sandy.  I don’t mean sandy like Hackney Marshes or Northala Fields.  I mean sandy like Southend Beach.  Except it’s not a beach, it’s a forest, so mixed up in this sand are concealed trip hazards like fucking great branches, tree roots, pine cones and random sink holes.  You can already see where I am going with this, can’t you?

I started off slowly, having a chat with a fellow tourist, Ann, who’d caught my eye as she had an arm in a sling, and of course I wanted to know the gory details of how it had got that way.  (Gardening mishap, for the record).  After a while Ann said she was having a bit of difficulty keeping her pace up because of the limb deficit and suggested I run on.  I cracked some hilarious joke about not wanting to break the other arm and scuttled onwards.

I’d almost completed the first lap when it happened.  My right foot caught in a tree root that I’d not spotted in the sand and I faceplanted in the sand.  The good thing about falling in sand, I suppose, is that it is a softer landing than (for instance) the cobbles of Victoria Dock.  The worst thing about landing in sand is that if you happen to be a bit damp from (for instance) running 2km on a humid 25c day, the bollocking sand will stick to your grazes, get down your running top into your cleavage with a sandpaper effect and drip mysteriously down your neck looking like something altogether more unpleasant.  To give myself a bit of credit, I didn’t miss a beat and got straight up just like Mo Farah when he fell over on that track race and went on to win – you can barely make out the point where I fell on my Garmin trace.

I was so busy  feeling sorry for myself with my hurty arm and filthy body that I forgot to look where I was going and promptly stacked it over another tree root on the other side of the loop.  There were probably a few swearwords.  Bloody Poland, bloody trees, why have I flown all the way across bloody Europe to do a bloody stupid parkrun on bloody unsuitable surfaces where there is a stupid parkrun on unsuitable surfaces half an hour’s walk from my house that I still haven’t done?

I quite enjoyed the out-and-back bit this time because I got to show everyone my injury.   There’s no point hurting yourself if you can’t get any attention for it.

As I came up to the extra sandy bit where I’d fallen the first time I scoured the floor for signs of that well concealed tree root.  Where was it?  I must not fall over it again… argh!  Yes, I fell over it again.  Fuck’s fucking sake!

Having possibly set a word record for “times fallen over in the space of one parkrun”, dripping with mud, sweat and blood, I practically tiptoed the last half kilometre and didn’t even sprint for the line.  Falling over three times was humiliating enough, falling over for a fourth time at the finish line with 66 runners watching me would have been so soul destroying that I would have had to pack my bags and get on the next plane home.  My time was 38:13.  It was not my finest hour (or my finest 38 minutes).  At least I didn’t lose my barcode in the mud.  To suffer all that ordeal and go home Z-less would be too cruel.

Rob was first Brit in 19:52, Helen was first woman in 25:06 and Camilla and Andrew were first in their age groups.  All I could say for my performance was that at least I didn’t break any bones. 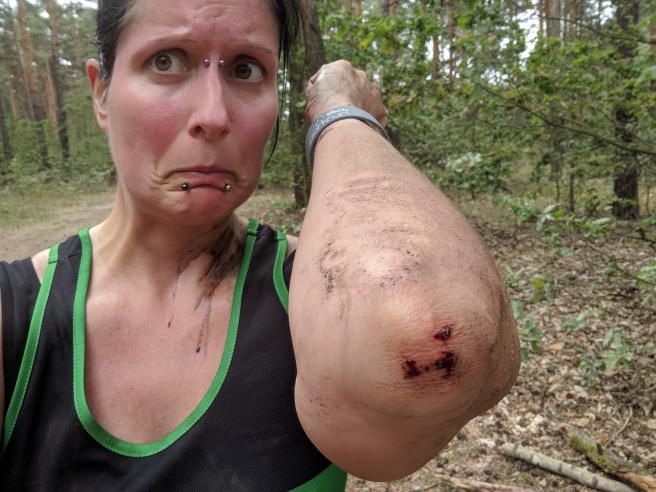 As we didn’t fly back until the next day, we spent the rest of Saturday exploring Zielona Gora.  Although it’s not a huge place, I think I would have liked another day as there were a few things I’d like to have seen – most importantly the Museum of Ancient Torture and Wine (sounds like my ideal night in).  What we did see was the waterpark (amazing fun and the chlorine was good for disinfecting wounds, though I banged my head on the waterslide and nearly did the splits falling off the bouncy dome), possibly the world’s best vegan restaurant, Wegarnik  (seriously, you need to try this place), a lot of strong Polish beer and an Indian meal at a place called Namaste where I had the world’s hottest lime pickle (not a great idea when you have a 200k car journey the next morning).   Zielona Gora totally exceeded my expectations as a tourist destination and I didn’t want to go home so soon, but it was probably a good idea I did before I injured something else or got on a wrong train and ended up in Bialystok.

Next week I am going to Finsbury Park.