This time last year I was nervously packing to head off to Brighton to run the marathon.  My last 5k before the marathon was Grovelands parkrun, which I completed in 38:39.  Every step was agony and I felt like I was going to throw up at the top of the hill.  I remember getting to the finish line feeling shattered and wondering how I would ever make it round eight and a bit times that distance in a week’s time.  (The answer, as you know, is very very slowly).

It’s therefore quite annoying that a year on, I find myself packing for Brighton once again – this time for the 10k version and marathon spectating – and realising that I am in much, much better form than this time last year.  If I were to run the marathon on Sunday I have absolutely no doubt that I would beat my time  Perhaps the way to train for marathons is to not train for them.

My pentimulate 5k before Brighton this year (I have Eastbourne parkrun to come on Saturday) was the first Chase the Sun of the season, on the well trodden paths of the Olympic Park. After getting up rather early to go swimming at the heated lido in London Fields, I found myself nodding off on the bus to Chase The Sun and had to concede that perhaps I wasn’t quite in PB mode tonight.  More in the mood for a nap than rearing to go.  However, once I’d started I realised that I was going a smidgeon faster than last time.  As I entered the final kilometre my watch was giving me a predicted finish of 34:30 so I gave it everything I had on that last loop round South Lawn and finished in 34:04.  Goodbye, PB at Victoria Dock!  That didn’t last long, did it? 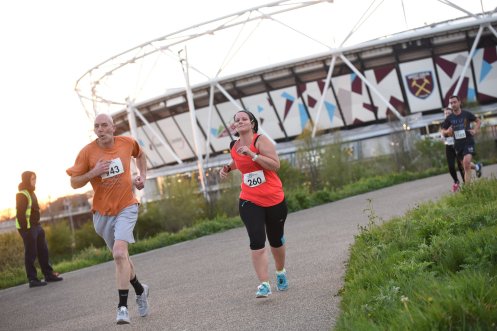 The cherry on top was discovering I had one a raffle prize of a month’s free gym membership (at a gym on the way to/from work), and a goody bag with a water bottle and towel (and two milkshakes which were duly rehomed).

I think this probably will be my last 5k PB for a while as my next few parkruns/Chase the Suns are on non PB-conducive courses and it’s going to start getting hot soon and once that happens I turn into a mega snail slithering along enjoying the sunshine. Probably.