We are in the season known as “Fools’ Spring”.  Daffodils are sprouting, antihistamines are popping, and the dust has been washed off my Ambre Soleil bottle.  We had the hottest February day since records began – 21.2c in London!  It was, of course, this day on which I had to do my first Long Slow Run since the Olympic Park Half.  Not only was this poor timing weatherwise, it was also the day before payday which meant I had no money for an emergency cab should the worst happen and limited funds for water and buses.  So I decided I should just go to the running track, where I could dump a pile of gels and water bottles by the side and stop at any point if things weren’t going to plan. 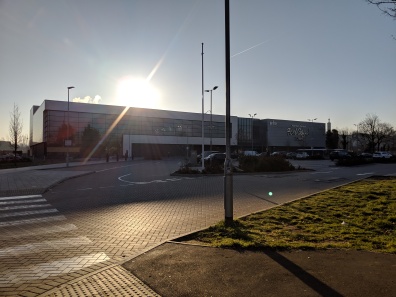 I had 15km in my plan but part of me wanted to do a whole half marathon on the track just so I could eradicate the demons from the Olympic Park and get a Personal Second Best.  However, as the temperature rose and my skin started to cook I decided this was actually a bit silly and revised my target to 16 and a bit kilometres.  Just enough for Strava to give me new PBs for 15k and 10 miles.  It’s all about keeping your technology happy, you see.

People say “oh god how can you run round a track for two hours??” and they do have a point because it’s not the most interesting run I’ve ever done.  It does have its advantages, though.  As mentioned above, there’s the convenience of being able leave your belongings trackside and use toilets, water fountains, cafe, sauna, etc etc at the gym as needed.  And the boredom itself is actually an advantage in a way.  I run faster when I have less to think about, and concentrate more on getting my form right than “oh look a tree… a dog! … an annoying person!”  There is a reason why I got my parkrun PB at Bromley, after all…  And it’s actually quite nice to be out there on your own, with the fresh air and no one around and nothing in your way, flying freely in circles like a hamster on a wheel.

Anyway, boring runs make for boring posts so I shall bring this to an end with those Strava PRs: 2:06:05 and 1:57:29 for 15km.  They’re actually my second best times (actual bests from Brighton 2016 are 1:57:41 and 1:49:16 and but Strava doesn’t know about these).  I was really happy with this run and I hope that the speed gained by running on a track was offset by the tropical weather and the boredom and that this is a realistic picture of the pace I am capable of running a half marathon at.  Continuing that pace for another 5km would give me a finish time of 2:45ish, which I think is a sensible and achievable target.  I am just praying that Landmarks will not be blighted with infectious diseases, patronising pacers or any form of weather.