It is five years now since I started running, and in the whole of that time I have never, ever run a 5k race or parkrun in less than 35 minutes.  Until now.

It was back to my old friend, Chase The Moon at the Olympic Park.  I always run a bit faster at the Olympic Park.  My friend Steve says it’s because we are “inspired by the spirit of the Olympics” which is a nice thought though personally I think it’s more likely to be due to the bouncy fresh tarmac and slightly off-flat terrain. 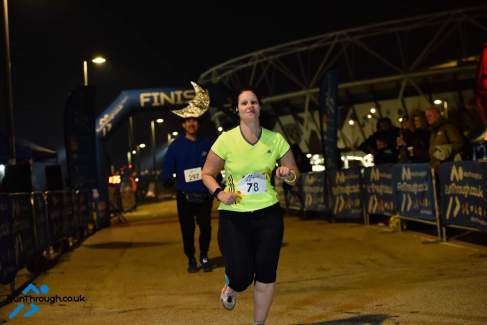 Anyway, I set off from the back and had the pleasure of overtaking a bunch of people.  I could see Rosemary’s dayglo top in the distance and I knew she runs at a 35 minute kind of pace, so concentrated on trying to catch up with her or at least not let her slip too far away into the distance.  My first two kilometres passed at an extremely pleasing speed, but I recalled a few recent parkruns where my pace had faded after km two and prayed that I could hang on this time.  And I did!  Kilometre four was a little dicey – for the first time my pace went over seven minutes per kilometre, but I just kept concentrating on Rosemary’s back and trying to close the gap.  (She had absolutely no idea I was using her for a pacer.  Sorry Rosemary.)

Kilometre 5 was back to sub-7 minute km pace, making my overall average pace 6:52 per km, which is fast enough for a sub 35 km IF the GPS measures the course perfectly accurately.  As it was, my watch buzzed for 5km eighty metres before the finish with the watch on 34:24.  Knowing I had thirty-six seconds left to make or break my goal, I abandoned my Mo Farah impression and sprinted like Usain Bolt, the illusion that I was breaking the world 100 metre record only broken by the winner of the 10k race lolloping effortlessly past me in the final seconds.

Now the big question – will it take another five years for me to achieve the Holy Grail for Average Runners, the Sub 30?