You know what I’m like with a hill.  As soon as my favourite running events company, RunThrough, announced they were putting on a race on the infamous zigzag road loved by cyclists in lycra on fancy bikes and featured in the Olympic cycle route, I was there.  Box Hill, near Dorking, is a “site of outstanding natural beauty” (even Google maps says so) with views over leafy Surrey and I couldn’t wait to run up it.  With 120m total elevation, the route was hillier than Hadleigh parkrun although not quite up to my jaunt in the French mountains.  However, unlike said French jaunt, the 120m is all in one go.  First down, then up.  Runthrough promised us the fastest mile of our lives, followed by the slowest…

But first of all, we had to get there.  Linda and I set off from Victoria at 6:40am and were kindly collected by fellow runners Geoff and Moneil at Dorking station and driven to the race car park, which was basically just a field with some portaloos.  One could hear cows in the distance and there was nothing around except trees and hills.  It seemed very odd to see the usual RunThrough set up here instead of an urban park. 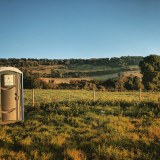 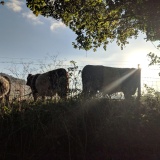 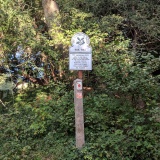 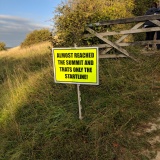 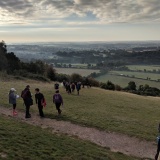 The car park was a “little uphill walk” away from the start.  Little uphill walk my arse!  It was practically vertical!  I thought we were going to have to get out ropes and poles!  I knew it was bad because even Linda, who is much fitter than I am started moaning about it and losing her balance.  Because it was so steep my feet were pointing in a funny direction, which made my calves hurt, but when I tried to straighten them I started to topple and ended up sitting on the floor.  I thought I was going to have to crawl up on my hands and knees.  You will, however, be glad to know that I caught a glimpse of the view and was temporarily distracted from my plight – long enough to take a photo.

By the time I got to the top I was ABSOLUTELY SHATTERED and full of trepidation for the race.  In fact, it turned out that the race itself was nowhere near as difficult as the walk up from the car park.  The first half, the downhill section, was a complete breeze.  The road is very smooth and wide, and it felt like I was sailing effortlessly towards the bottom.  I enjoyed seeing my pace on Garmin flit between 5 and 6 minutes per kilometre and get a glimpse of how it feels to be a normal paced runner (while all the normal paced runners got a glimpse of how it feels to be a fast runner, and the fast runners got a glimpse of what it feels like to be a car).  The scenery was absolutely amazing too, especially the view of the runners ahead snaking down the zig zag road all the way to the bottom. 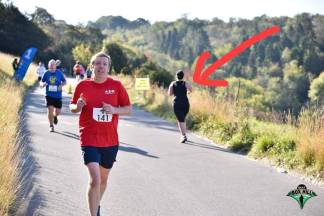 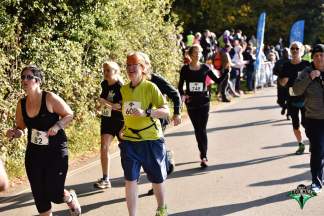 What goes down, however, must come up and the way back to the top wasn’t quite as effortless.  I don’t think my climbing strategy was very good.  I normally either go at a hill, upping my effort for a short length of time, or keep effort the same and speed up when I get to the top to compensate for lost speed.  Because this hill was 2.5km long and the top was the end of the race, neither of these strategies seemed to work, so I went for a walk/run, except I wasn’t really sure what length intervals to use and kept swapping and changing and on the whole I reckon I could have got up the hill a lot faster (my uphill kilometres took 9-10 mins each).  I definitely need to practice this sort of thing.

Suddenly it was all over and I was crossing the finish line.  My official time was 40:07 which I was both pleased with (because I set myself a target of 42:30 before the race) and disappointed with (because it was so close to being sub 40 and if only I’d taken the uphill better).  I was presented with a really good quality medal and t-shirt, which was great especially as it was only £25 to enter.  The t-shirt is a lovely blue colour with an artistic representation of Box Hill on it and I’ll definitely wear it again. 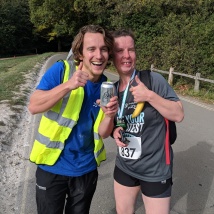 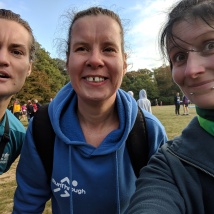 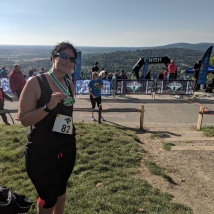 At the end of the race I found Linda (who had done her usual thing of “I’m only doing 5km today, oh oops I’ve gone round again”).  Neither of us wanted to scale Abseiling Hill again, so we set off into the unknown with the intent of walking to another nearby station.  However, after five minutes we were still arguing about which way to go, and the Rock Choir, who had been providing the morning’s entertainment, intervened and drove us to the station.  A fitting end for a totally bonkers morning.  Thank you, Rock Choir, we’d probably still be walking in circles up and down that bloody hill if it wasn’t for you!

I really hope RunThrough make this an annual event, or perhaps even the beginning of the RunThrough Ridiculous Hill Runs series.  Absolutely loved it!