Southend parkrun comes under the heading of “parkruns I have been meaning to go to for ages but keep getting thwarted by engineering works on the Gospel Oak to Barking line”.  This weekend was my last real opportunity to do it before it gets too cold for this nonsense, so I was relieved to see a rare day when the trains were actually working.

I managed to drag an injured Rob, who could only walk and not run, to the parkrun.  Since Rob can actually walk faster than I can run this made him the ideal pacer and I programmed him with the instructions to finish between 36 and 37 minutes, thus improving on my best recent time without causing me to drop dead with overexertion. 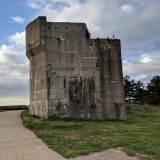 We got the train to Shoeburyness (Southend parkrun isn’t really in Southend – it’s about 5m away) and walked to Gunners Park.  The nearest loos are in Shoeburyness on the beach, ten minutes walk away (I think there are also some in the station) but there are none actually in the park.  The sunrise over the beach looks quite spectacular so it is well worth turning up early to get some selfies with it.

Everyone at the parkrun was especially friendly and wanted to know where we had come from and what our home parkruns were like etc. I spotted at least two other cow cowl wearers (Joe and another man whose name I can’t remember, sorry) and another man who was a Tourist but was sans Cowell as Southend was his home run.  There were about 400 people there, which seemed like a massive crowd compared with the teeny tiny parkruns I have attended lately. 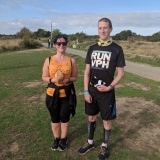 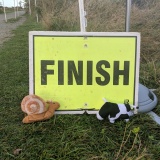 The course is very simple: three times around the edge of the park, then cut into the middle for the finish line.  It is almost all on good tarmac paths, but there is one section of Essex Tarmac (gravel) on each lap, and the finish is also Essex Tarmac.  There are a couple of tiny slopes here and there but on the whole it is nearing pancake territory.  There are no trees whatsoever, so not one for a hot day, but there are some ramparts and lots of signs warning you not to get blown up, as the park used to be an army range.  Apparently once the parkrun had to be cancelled due to the discovery of an unexploded bomb.

The start is very narrow and it turned out that I totally misjudged where to position myself by not anticipating that there would be a number of walkers (proper walkers, not 36 minute walkers) and had to do a lot of excuse-me-sorry to negotiate a place amongst the snail runners.

I took the first lap at what felt to me like a breakneck speed of 6:53 per kilometre.  This rendered me totally unable to speak, whilst Rob walked alongside me cheerfully thanking the marshals for both of us and telling anyone who could keep up long enough to listen “I’m injured! I’m usually sub-20!”  He also pulled out his phone and took this highly flattering photo in which you can clearly see I am giving him the side eye and trying unsuccessfully to muster enough breath to swear at him.

After the first lap my knees were starting to go a bit wobbly and I realised I had rather overdone the pace so slowed it down a bit.  The second and third laps passed without much of interest happening.  Apparently my “sprint” for the finish line was the only time Rob was unable to keep up with me.   My finish time was 36:46, his was 36:47.   This was bang on the requested pacing and I hadn’t been beaten by a walker, so harmony remained.

On the whole I am very pleased with the turn my pace seems to have taken lately.  I am not sure if it is down to the weather, losing 5kg, hill training or avoiding marathons, or all of the above, but I think if it continues I could be looking at a new parkrun PB by the end of the year.  The time to beat is 35:19…