Last year I took part in the Kew Gardens 10k, which is part of the Richmond Running Festival and really enjoyed it, so in 2018 it was back for round two.

There had been a couple of improvements from last year, in that the route stayed within the gardens the whole way instead of taking an awkward diversion on to the pavements outside, and the water station was now at exactly halfway.  The photos were miles better too, but unfortunately correspondingly expensive hence the watermarked versions in this post.  Like last time, there was a very good quality and attractive medal at the finish and a voucher for a free beer in a nearby pub which was swiftly utilised.  Some other things were not so good: mainly the fact that the race seemed to have been ridiculously oversold.  In 2017 there were 2318 participants, in 2018 there were 3147, all setting off within fifteen minutes of each other.  The paths were completely packed out with people and I found myself constantly getting irritated with other people running three abreast – particularly as at my pace you get a lot of run/walkers so someone like me who runs at a constant pace will find themselves continually having to overtake the same people.  There were long queues for bag check to get in and long queues for the toilet.  At the finish there were no goody bags left for about 500 runners and since it was a warm day and there was no water except in said goody bags I wasn’t very happy about this.  My final moan was that the t-shirt was crap.  A black and yellow one had been advertised before the race but the final version was white, with a bad pun about flying feet and Peter Pan that no one really got, and absolutely no mention of the race or date. 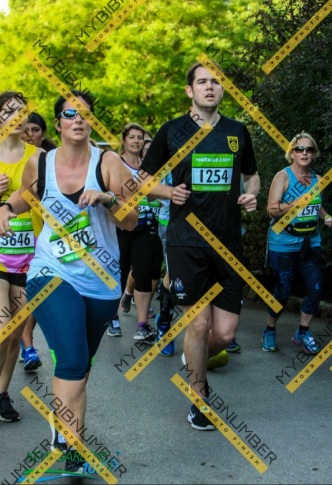 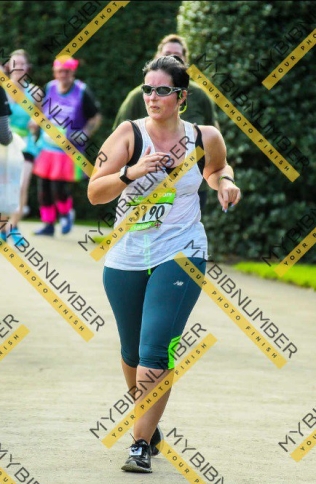 But any moans are completely cancelled out by the experience of running in beautiful Kew Gardens!  It’s amazing to flit between the different zones – one minute you are running between tropical greenhouses, the next through budding crocuses (in September?!) and then through a pine forest.  There’s a particularly nice bit where you run alongside the Thames Path and look across to Syon House.

I went to this race with Rob, who was a bit grumpy and limping after doing something to his right knee by running on it too much.  He had had another of his bright ideas, which was to pace himself by running with me.  I did not think this was one of his better ideas since he can walk a half marathon faster than I can run one, but on the other hand I thought that maybe if he walked the whole thing with a limp I might just about be able to keep up and get a decent time in the process.

Unfortunately it soon became apparent that the difference in our sporting abilities was insurmountable when Rob caught sight of the 70 minute pacer and suggested this might be a good person to keep up with.  I have never run 10k in 70 minutes in my life.  As we set off, I did manage to keep up with them both for a whole kilometre, but this was with me running at full whack and Rob shuffling awkwardly and eyeing the faster runners who were already starting to pass up coming back the other way longingly.  As we rounded a flowerbed, I got caught behind a bunch of three-in-a-rows and took this opportunity to drop to a more sustainable pace whilst Rob speeded up, overtook the 70 minute pacer and disappeared into some conifers in a cloud of dust.  I breathed a sigh of relief and plodded out the next 9 kilometres. 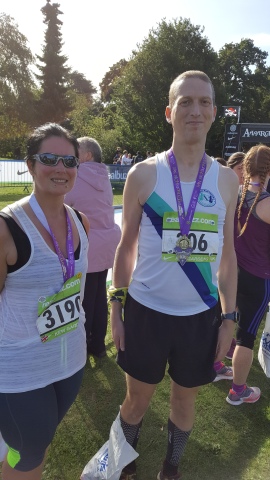 I will admit that after being really happy with my times in my last two 5ks, I was hoping for a fairly decent time in this too, and was a bit disappointed that this did not materialise.  I finished in 1:21:49, which was still my fastest 10k since the marathon, but I was hoping to be well under 1:20.  I think the warmer weather and the congestion on the paths were a big factor but probably not as much as the fact I have got really used to running 5km and only 5km over the last five months.  I really need to start doing some longer training runs.  By the way, Rob had finished a whole twenty-two minutes in front of me, despite the limp.

I will leave you with a highly amusing sequence of photos where a mysterious woman in black ruins my flying feet photo by daring to run in front of me, and I track her down with a murderous expression and exact my revenge by beating her on the line.  That will teach her.