I was rather nervous about last night’s race, not just because of the hills and uneven terrain of Crystal Palace Park, but because the equivalent fixture in last year’s Chase The Sun calendar (exactly a year ago) had ended very badly.  The race itself had seemed to go okay, but I had been having a niggling pain at the top of my bad leg for the last week and midway through the race I had decided to switch from 10k to 5.  I can’t quite put my finger on why I did that, I wasn’t in pain, but maybe I was getting some signals from my leg that I wanted to stop.  I collected my flapjack and medal and was walking down some steep steps towards the station when I felt a cramp in my bad leg that was bad enough to make me pull up and just didn’t go.  The rest of the journey home was a limp, but I tried to tell myself it was okay, it was just a cramp, just one of those things runners had to put up with.  When I got up the next morning I couldn’t put it on the floor, I used crutches to visit the toilet and I had to take every type of painkiller in the house before I could get to work (via taking the bus three stops to the tube).  I knew then I had done the same thing to my leg as I had a year previously – this had been diagnosed as a sprained knee and had taken three months to get better, despite the doctor telling me it should only take a couple of weeks and that I should try running on it as soon as the pain went down.  I knew that I hadn’t sprained my knee and this time I went back to the doctor and made a pain in the arse of myself until I was granted an MRI, which showed what I had thought all along was right – there was evidence of “at least one” stress fracture at the top of my left tibia.  It was six weeks until I could run again.

Although I knew my injury hadn’t really been caused by the run at Crystal Palace – the steep downhills and uneven terrain probably just brought on the inevitable – I was very nervous about going back as the superstitious part of my brain was telling me that I was doomed to suffer a stress fracture at the beginning of August every year for the rest of my life and that perhaps I should just stay in bed for four weeks. But I gritted my teeth and got on with it. 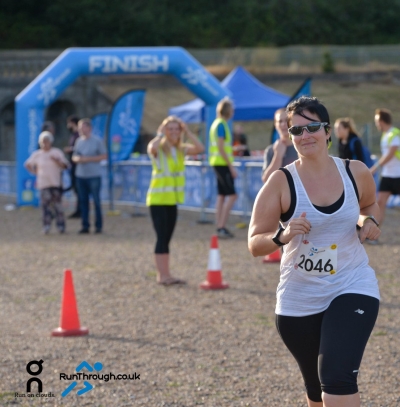 The Crystal Palace course is possibly RunThrough’s toughest.  Crystal Palace Park is set on the side of a very steep hill and the race starts at the top of that hill, on the site of the great Crystal Palace itself, which was destroyed by fire in 1936.  The start is on a very uncomfortable gravel path, then it takes to a steep uphill trail through some woodland round the very highest part of the park, near the TV transmitter.  From there on, the only way is down!  The easiest part comes next, a kilometre of varying steepness, mostly on tarmac paths, with an incredibly perilous cut through some trees where I had to slow down to avoid running smack into one.  Next there comes an mildly undulating section around the lowest point of the park on trail paths, which very excitingly takes you past the famous Crystal Palace Dinosaurs!  From there on, it’s just up, up, up.  There’s two very steep bits, which I walked, and a long long winding gentle hill which I insisted on running but apparently only covered at walking pace anyway.  But it’s the principle that counts. 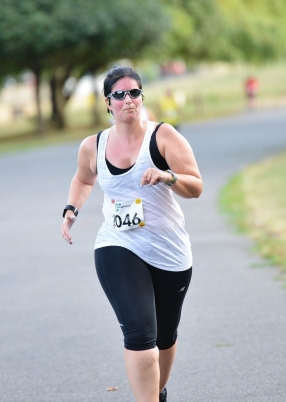 My finish time was, as expected, underwhelming at 41:13, but this was fine as I really hadn’t been going very hard at it (the hills and the injury paranoia were enough of a challenge without worrying about my time).  Best of all I did not break my leg, fall over or in any other way injure myself, so I will be back next week to up my distance and take on my first running 10km since The Marathon at the Olympic Park!

In other news, my progress towards losing weight has not been so successful.  I have lost a grand total of 0.5kg in the entire month which is rubbish and even if I kept doing this every month it would still take me until next summer to meet even my upper target.  I am putting the failure down to three things:

My proposed solution is:

Therefore my August quest (starting today because I only decided last night) is to stop eating sugar.  Obviously not eating sugar at all is a tall order but I will not be eating anything that has sugar as the first or second ingredient on the list, and will be replacing things (eg. baked beans, almond milk) with sugar free or reduced sugar versions.  I think my diet would probably be pretty decent if I didn’t eat so much sugar based nonsense, so it’s time to see how much difference it makes.  I had Marmite on my toast instead of jam this morning.