When I signed up for the Westminster Mile nearly a year ago, I had some great ideas about doing lots of speedwork to train properly for it and do a super-speedy flying feet mile.  It started well and by November I was down to 9:51. Then The Marathon happened and everything went to pot and what actually transpired was that I did next to no running in the month leading up to it and absolutely zero speedwork.  Plus it was a mega hot and humid day and not nice for running.  Instead, I used the Westminster Mile as a) a warm up for the London 10000 b) a nice day out c) a good way to set an appalling PB that I will have no trouble beating next year (IF I train properly and do not have any stupid ideas involving marathons). 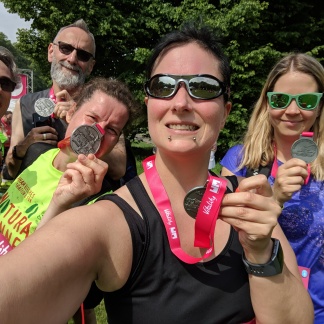 Anyway, I found a few RunThrough friends in the park and got a few selfies and then Linda had a row with a woman who pushed in the queue to get a photo with a cardboard cut out of Mo Farah which amused me greatly, and then we were off (bag check courtesy of ViewTube Runners – they get everywhere!)  It is hard to write about a mile run!  It was over before I knew it.  I went off much too fast and then slowed down much too much and just when I was finding a comfortably fast pace there was the finish line!  My time was 11:42.  Target for next year is therefore 9:42. 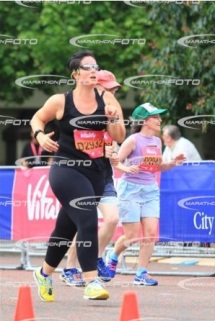 The next day was the big race – the London 10000.  Back in 2012, this was my first ever 10k road race.  I was twenty kilos heavier then and not a regular runner.  I entered mainly for the fun day out, the prospect of a medal and to raise money for London’s Air Ambulance.  I’ve done it a further four times now and it’s got bigger and bigger and more chaotic each time.  The start in particular was very badly organised – once you went into the bag check you weren’t allowed back out to the park, the toilet queue went on for miles and lots of people missed their colour coded start, then an official directed everyone remaining another way, where there turned out to be a huge bottleneck.  Purely by chance, I ended up in the correct start area (second to last, orange), although I’d actually wanted to drop back to the last group as the time I was capable of getting when I signed up (1:10-1:15) was not the time I was capable of getting now.

I didn’t see any point whatsoever in busting a gut and exhausting myself to get a mediocre time in this race so instead I took it ultra easy and set my timer to “Jeff” two minutes running with 30 seconds walking.  I don’t think this did anything to improve my pace but it certainly improved my comfort and most of the 10k felt like being out for a pleasant stroll on a summer’s day.  I did another 10k last summer in similar temperatures and remember completely overheating by halfway and finding myself unable to do anything except walk to the finish feeling really fed up and I think that if I had tried to run the whole thing this year the same would have happened.  Also, very pleasingly, neither of my legs bothered me at all the whole way round.

My mother had come to watch the race and she was very pleased to see the winner, Mo Farah, run past her twice.  Sadly, I never had a chance.  He’d actually finished before I crossed the start line.

The only part I found hard was when we went into Whitehall and the sun was right overhead, beating down.  According to my Garmin the air temperature went from 20c to 30c at this point!  I took a longer walk break but I never really cooled down and my plan of running the whole last kilometre totally went to pot.

I was outsprinted by a giant yellow postbox with 300 metres to go.

My finish time was 1:27:17 which was about what I was expecting.  I probably won’t do this run again next year as I found it much too crowded – even at that very slow pace there were people all around me, and the chaos at the start meant they were all going at different speeds and bashing into each other.  Run/walking was particularly hazardous and I found myself moving to the side, checking behind me and giving hand signals as I slowed down – a bit like I was riding a bike.  I think that if I had been running at full pace it might have been unpleasantly claustrophobic and I would rather run smaller races and have a bit more space. 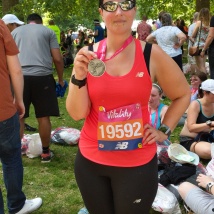 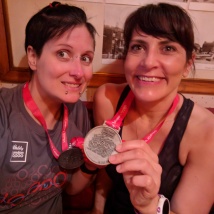 After the race I saw Samantha from my Facebook running group, “Pringles” who was volunteering cutting off timing tags.  Unfortunately the sun had totally got to me and I completely forgot her name, so could only shout “Pringle!” at her.  At first she looked at me with a confused expression and I thought “oh god I have just run up to a complete stranger and shouted “Pringle” at them” but fortunately it was actually her and we got a very sweaty selfie together (see above).

The medal was very nice and the goodie bags from both races were all-vegan!

Next I met my mother in the park and then went to the pub to meet Zoe, another Pringle, for the first time (unless you count last week when she speeded past me at the Hackney Half).  It is a sign of being a runner that you can meet a new friend for the first time whilst make up free, absolutely stinking of sweat, and have a long conversation about whether it is better to defecate in public view or soil yourself mid race before you are even drunk.  Fortunately I did not repeat last week’s drinking marathon and was eating a vegan wrap on the tube home by mid afternoon.