All those people who gave annoying, unsolicited, know it all advice in the run up to the marathon?  I’d love to say they all conked out at 20 miles and shut up, but sadly not, they’re all now boasting about how little time it took them to get back up and running again after the marathon, and how they ran a little 10 mile “recovery run” over the local mountains three days later and are looking forward to an ultramarathon at the end of the month. 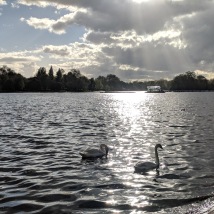 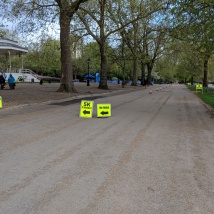 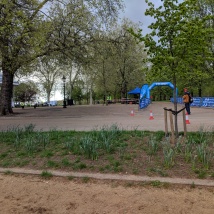 Meanwhile, yesterday I proudly completed my first 5km since the marathon.  It felt like it was the first 5km I’d ever run.

When running is going well, your body feels at one with itself.  Your legs produce the movement to propel yourself forward without any conscious thought and you fly along.  Your heart and lungs work as hard as they can and your legs simply lap it up and take you round.  When it’s not going well, it’s a totally different bag.  Your body is now a mass of limbs, ligaments, joints, muscles, bones, skin, all of which have their own little aches, pains and holes and somehow you have to get all these bits together and moving in the same direction consistently enough to carry you forward and without irritating any of them enough that you have to stop.  You become very aware of imbalances, for instance, the fact that your left hip is tighter than your right, or that the sole of one shoe is digging in more than the other.  You even become hypersensitive to your clothing.  This is one of the reasons I always wear two running watches.  Your heart and lungs say “let’s go!” but your legs just won’t play ball.  You are working just as hard but instead all that energy goes into heaving your legs off the floor and not getting them tangled in a knot with each other.

Still, it was better than last week in that I actually managed to run 5km with no walking, finishing in (hmm that’s strange – my result isn’t on the website, so I’ll have to go with Strava) – 39:17, even though it was slow and painful and felt more like the last 5km of a half marathon than a quick, enjoyable race.  I can’t quite decide if I need more running or more resting to get myself back to normal but I’m just trying to console myself with the fact that if I continue to get three minutes faster every week, then I’ll be running a PB next month.

And finally, the race itself!  I really liked this route – a simple loop around Hyde Park, starting with a stretch through the trees and along the north side, then a path that cuts through the grass, down a little hill (which you never seemed to go back up again), along the Serpentine and back to where you started, with the start and finish by the bandstand near Hyde Park corner.   The tarmac is perfectly smooth except for a couple of speed bumps (why are there speed bumps in a park) and the odd drain and the paths are wide enough for the faster runners to get past without incident.  I think this could be a PB course if my legs fancied taking part properly in future.  I think I’m going to be doing it twice again over the summer so here’s hoping! 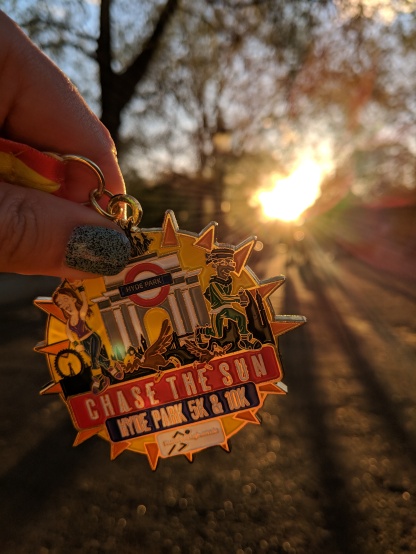 One thought on “RunThrough Chase The Sun Hyde Park”