A week on from the marathon, and I’m still perplexed as to why every single person I speak to doesn’t want to hear about it in minute detail.  I am telling them anyway, including random people I never normally speak to at work, the scary HIIT instructor at the gym and absolutely anyone I interact with on Facebook.   Can you believe that absolutely no one has asked to see my medal?  I gave up and put it in a frame and hung it on my wall.  Now anyone who comes round my flat will HAVE to see it. 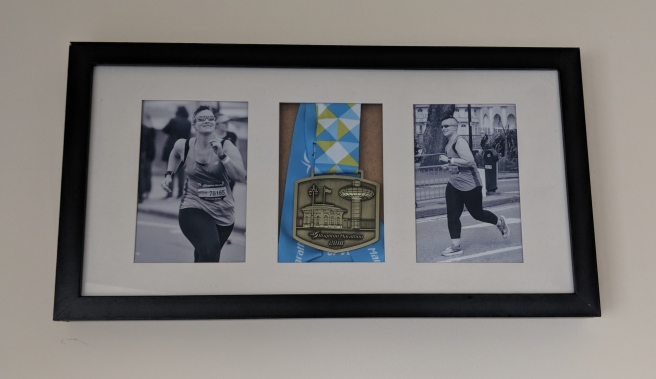 I am now walking normally again, and the aches and pains are pretty much gone, though my calves are still a little tender (when are they not?).  My appetite is finally returning to normal.  I am still quite hungry and eating a lot (of avocados) but the cravings for sweet and unhealthy foods have gone and I am now able to go for over an hour without food without being so hungry that I start chewing my own arms off.  I have lost 1.5kg in eight days. I haven’t been for a proper run yet, but I did manage said rather intense HIIT class today, so I guess I’m almost back to my former self.

Yesterday was the London Marathon, and as I live in London and was working nights, I encountered a steady stream of nervous looking runners on the way to the race while I was going home to bed, and the same people, proud and sunburnt, wearing their medals on the tube as I returned the next evening.  My thoughts were: that was me last week! thank god I don’t have to do that again, I can barely walk, oh god though I feel a bit sad that it’s all over and that will never be me again, hmm did I actually mean it when I said never again?  My friends were no use!  They were supposed to point out that the marathon had a terrible effect on my body and lifestyle and that I had vowed never to do it again with very good reason.  Instead they started saying things like “I will if you will” and discussing which marathon to sign up for next.  My friend Dawn, the one who narrowly missed pulling out of the marathon due to spending a couple of nights in hospital with a twisted bowel, was so convinced that she would never do another that she left her trainers in the hotel bin in Brighton.  It only took six days for her to do a complete 180 on this and now she has signed up for Leicester and Manchester and entered the ballet for Berlin.  Dawn is a bit of a superhuman though, she’s about six feet tall, covered in tattoos, works as a firefighter and actually enjoys obstacle races.  I was not made from the same template as Dawn.  So I managed to resist the pull of the rebound marathon sign up.  I figure that we are not thinking straight in this post marathon delerium and that unwise decisions can be made in this volatile time.  It’s like going on Tinder the night after a break up or going to Battersea Dog’s Home the day your dog is put down.

This morning I heard the news that a young man had died whilst running yesterday’s London Marathon and this of course had me in floods of tears.  It wasn’t seeing his picture or even the tragic backstory detailed on his JustGiving page that got me but seeing the photo he posted on Instagram the morning of the race of all his kit proudly laid out and ready to go, the attention to little details such as Body Glide, the timing chip which would never record a finish time and the deathly silence where the jubilant finisher’s photo should be.  My heart breaks every time I see it.

Dropping dead during a marathon is occasionally one of my maranoid worries, so I would like to say the following should it ever happen to me: