In the end I went with Plan B (just get round) but really I should have stuck with Plan C (drop out halfway) or even Plan E (fuck it all off and go to the pub).  It was a shocker.  I’m feeling pretty down about the whole thing so please excuse the negative tone of this entry.

It was so cold.  I don’t think London gets cold the way Brighton gets cold, with a chilling wind that gets right into your lungs and your muscles and destroys your ability to to think, breath and more importantly run.  The hotel I was staying in was also very cold and I spent the morning of the race thinking not about the run but about the weather.  I left at the very last possible music and squeezed into the corral just in time for the start.

I hadn’t run for six days, cursory efforts to warm up in the hotel seemed to have had little or no effect, and I started the race feeling like my arms and legs were made of wood.  And that was the best I was going to feel all day.  For the first three kilometres, the feeling was bearable.  The beautiful views along the cliffs, the sight of the leaders coming back the other way, the memories of 2016 all swept me along and I didn’t really care that I was already falling behind target.  There was a horrid, biting wind along the cliffs and I was running right into it.  It made my nose run and made me feel I was gulping for air.  I started to feel quite sick but I wasn’t sure why.  I started to run/walk before we’d even reached 5km.  There was a momentary relief as we reached the turnaround point and started to run downhill, away from the wind.  I think this was my fastest point in the race.  But really, I wasn’t ready to run a half marathon so soon after injuring my calf and in retrospect I think I should have just poured a full effort into running half the race and then dropped out, rather than half heartedly limping the whole way round.  My calves started to tighten up, and then my hips went funny, and I even developed a bit of a backache (which I still have now).  The top half of my body started to go numb.  If I had realised how much walking  I would be doing I would have wrapped up warm, but I had foolishly dressed as if I would be running the whole way.  I cannot run in long sleeves, gloves, hat, etc.  I never feel cold when I’m running and would have been fine dressed as I was if I had been able to run.  But I literally could not run.  I ran a few steps, then something seized up and I started walking again. 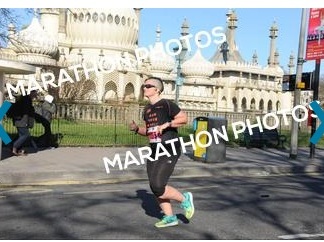 By the time I reached Hove, I was seriously fed up.  I started repeating “everything hurts and I am in hell” over and over in my head because it was the only thing I could think.  I was becoming a little delirious because I was convinced that everyone on the half marathon had missed a turning and were heading towards Worthing, never to be seen again.  I even considered that someone might have changed the road layout of Brighton since last summer, since nothing looked familiar.  Then I reached the turn around point.

I must have looked a bit of a state because along the seafront I had a young girl sternly telling me “Come on!  There’s no point in giving up now!” which was absolutely true, as I’d have to walk back to the finish line whatever happened.  Right then I couldn’t have cared less about the half marathon, just about getting warm.  I can’t really remember much about the last stretch, but there are some photos in which I am pulling some awful expressions.  I didn’t buy them and I am not really sure if I am allowed to use the watermarked version but I think Marathon Photos have had enough money off me over the years so should go easy on me.  My finish time was truly awful.  You’ll have to stalk me on Strava if you want to know what it was, I’m too embarrassed to even write it down.  It then took me another fifteen minutes to find my hotel, because I couldn’t remember where it is, even though I am very familiar with Brighton and it was only 100 metres from the finish line.

When I finally got back to the hotel I actually thought I was going to die.  I couldn’t even make it into the bathroom to wash, I just stripped off and lay on the bed and tried to post something funny to Facebook.  And then the shivering started, and it didn’t stop.  I shivered and shook for a whole hour solidly and was shaking so hard that I pulled a muscle in my jaw.  Once I got the use of my hands back my first action was to Google “signs of hypothermia”.  Of course, this is something I should know from work, but I couldn’t remember…

Confusion… memory loss.  Poor decision making (like whether to stop at 8km).  Nausea.  Apathy.  Lethargy.  Increased pulse (199 while run/walking, for example).  Particularly likely to affect… people exercising, people inappropriately dressed for the temperature.  An urge to remove the clothes, then lie down, go to sleep, and die.

You’ll be pleased to know that I didn’t die, but I definitely think I was suffering from a touch of mild hypothermia during the race.  All in all it was a pretty rotten day and I was quite sad not to relive the highs of 2016.  I may have to return another year as I just can’t bear for my final half marathon to be one that went so badly wrong.

I’ve been feeling quite miserable, negative and apprehensive about the marathon.  In the last few weeks my training seems to have been going backwards.  I am getting slower at all distances and not able to run as far without walking.  I am full of niggles, aches and pains and constantly exhausted and craving sugar.  I am stressed out and snappy and I can’t keep up with work, friends or my other hobbies.  I have serious doubts about how I am going to manage a marathon when I struggled so much with a half.  I know there were some mitigating circumstances but I can’t rely on there being perfect conditions on marathon day.  There are so many things that can affect my race and I seem to suffer more from temperature related variables in particular so much more than anyone else.  I really want to do the marathon properly (by which I mean running most/all of it, or following a run/walk plan and not just walking because I have lost the capacity to run) and right now I feel that is slipping away from me.  On the whole I am feeling so rubbish that I can’t even think of a positive note on which to end this entry so I am just going to stop.