This was my third year taking part in the London Winter Run.  This is a large, informal 10km through the streets of Central London which fills a glaring gap in the running calendar.  I never understand why nearly all of the big runs are in summer, when hot weather is so hard to run in.  Sometimes it seems like race organisers care more about spectators than participants.  Like most central London runs, it takes a west-to-east-and-back route, starting in Trafalgar Square, passing through Strand and Kingsway, then out to the financial district (where the skyscrapers will bugger your GPS) and back past St Paul’s Cathedral and along the Strand again, finishing not far from the start in Whitehall, near Downing Street.

I knew this wasn’t a race to try for a PB in – it’s very busy and you tend to end up running more than 10k (even allowing for aforesaid wonky GPS), plus if you run flat out you end up missing the little touches that they’ve organised for you, like the snow machines and dancing polar bears.  Instead, I decided to practice my half marathon pace for Barcelona (roughly 7:30 per km) and see how comfortable I felt at the end of it.

The answer is pretty good!  I kept all my kilometres within the target zone (except kilometre two, which was a little too fast) and didn’t feel at all uncomfortable or out of breath.  I could definitely have kept going at that pace at the end, whether I could keep it up for another 11.1 kilometres remains to be seen but indications are good.

I will give a special mention to the “Penguin Zone”.  I had a traumatic experience with a penguin last October at the Scarborough Sea Life Centre, where they have a little enclosure where you can get up close and personal with the penguins.  I decided to have my photo taken with a nice little fellow called Custard.  Because I didn’t want to scare Custard, I stood a foot or two away.  How naive I was to think Custard would be scared of me.  Penguins are not scared of people.  Penguins would eat people for dinner if they were better equipped to do so.  Custard waddled towards me and started taking a great interest in my coat.  I whipped it away, he moved closer.  I started walking calmly away, Custard followed me with purpose.  He noticed my juicy runners’ calves and went in for a peck.  Ouch!  I broke into a run.  I am not so slow that I can’t outrun a penguin, however, the gate was closed to stop the little buggers escaping into the North Sea, so I was pinned into a corner, where Custard plunged his nasty little beak into my leg leaving a huge bruise.  I have not felt particularly warm towards penguins ever since.  So when faced with an array of human sized dancing penguins of various breeds trying to high-five me I significantly upped my pace and created a nice little peak in my Garmin chart.

My finish time was 1:16:40, 7:29 per kilometre, which was right on target.  At the finish I was forcibly hugged by a woman dressed as a snowman.  This was one of the most awkward experiences of my life.  After this I was very pleased to encounter my friend Jo, who I went to school with all of those hundreds of years ago.  Other than a fleeting hello halfway through the Great South Run, we’ve not seen each other for twenty years so it was nice to have a quick catch up and selfie before we went our separate ways.  Once all the marathon bollocks is over we will get all of our classmates who are now runners together for a parkrun and try to recreate a PE lesson from the late 80s.  Thankfully none of us will have to wear green and yellow running knickers and I won’t be faking a note from my mother to get out of it, though I expect just like at school I will be finishing last. 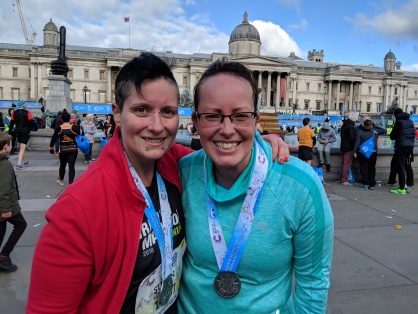