Christmas these days seems to be defined by a distinct lack of activity, closures and cancellations and gleeful gluttonous overconsumption of poor quality foodstuffs. Thank god for RunThrough to save us from all this with a festive run in Greenwich Park! They’d pulled out all the seasonal stops, with marshals in inflatable Santa suits and reindeer costumes, a rock choir singing festive faves and home-made mince pies and candy canes at the finish along with the regular flapjacks and bananas.

I have been to Greenwich Park many times for picnics and piss ups but this was my first time there as a runner and my perception of that massive hill in the middle has changed quite remarkably. According to the research I did when I got back, it’s actually double the height of the infamous Finsbury parkrun hill and the well-known hill sprinting ground, Primrose Hill. (I have spent about two hours since I got back comparing various hills of my acquaintance on Strava. Parliament Hill seems to be the hilliest hill that I have ever run up.) I may have mentioned before that I am a fan of hilly routes. Greenwich Park isn’t really hilly though, it’s just one massive hill. The 10km consisted of three three-and-a-bit-kilometre laps. The first half of each lap is almost completely flat, around the top of the hill, then there’s a fantastic downhill. I love running downhill. Being of above average weight for a runner and having rather poor balance and control of my limbs, I find I just plunge down the hill like I am on wheels, gathering speed and praying I will reach the bottom of the hill before my feet get tangled in each other and I fall flat on my face. In fact, on my second time down the hill I caught up and overtook several runners who had just lapped me on the flat. (Of course, they overtook again at the bottom of the hill). There is then a short flat bit alongside the college, and then… what comes down, must go back up again. I think it took three goes for me to get my technique for this hill sorted – on the first attempt, I ran slowly at the less-steep beginning and then tried to sprint up the steep bit (didn’t work, sprinted approx 2 metres before walking the rest), on the second I tried to run the whole thing slowly (similar result) and on the third I alternated running and walking all the way up (quickest time of the three, according to Strava).

At the beginning of the race I noticed a few people lining up in some admirable fancy dress costumes – I saw at least one Christmas turkey, one Christmas cracker, a gaggle of trees, a complicated costume with legs hanging off the side like a cowboy riding a horse (what this has to do with Christmas I don’t know) and thought to myself that if I got lapped by any of these people it would be time to give up running. Fortunately, I can report that none of them lapped me – the worst I had to contend with were several pairs of antlers and a woman in a “sexy Mrs Claus” Santa dress, which I can cope with. I learned a long time ago that runners in fancy dress aren’t likely to be slow – slow people don’t tend to handicap themselves further with awkward clothing! There were a lot of red and green striped leggings, which don’t flatter anyone (not even runners with perfect runners’ legs). My own concession to Festive Attire was a hairband with sparkly antlers attached. One of the antlers refused to stay erect. I also had a few festive tunes intermingled with my usual running playlist. I finished on Slade.

There seemed to be a lot of slower people out today than at the Chase The Moon last week, so this time I had plenty of company for my last lap. I decided to keep a tally of how many people overtook me and how many I was overtaken by in the last lap and the final total was: overtook seven, overtaken by zero. I was quite proud of this, firstly it shows that I have plenty of energy left at the end of a 10k now (when two months ago I couldn’t finish one without walking) and secondly it allows me to go a little further with my self-delusion and fantasies that I am Mo Farah overtaking the opposition in the final kilometre of an Olympic Marathon. (Do other slow runners do this or am I totally crazy?) 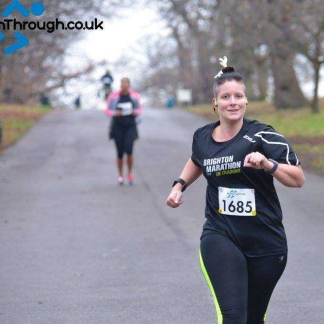 Coming down the hill 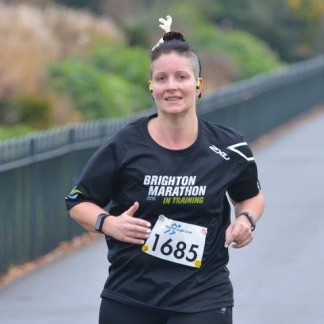 I didn’t much care for the placing of the finish line – near the bandstand just at the top of the hill – I was still recovering from the hill and didn’t have much of a “finish line feeling” let alone the energy for a sprint finish. I suppose they have to put it there for the toilets, but I’d rather it was at the bottom of the hill! Still, this is one small niggle in what was a great way to chase away the abject misery of the unfestive season. It’s my last race of 2017, too. My time was 1:16:06, which is nothing to write home about, but with that hill I knew this was always going to be more of a hill training session than a race. 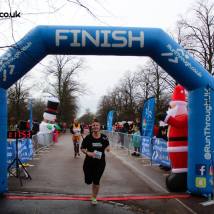 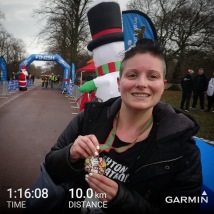 Note to self: New Year’s Resolution 2018 – do more hill practice