Having been confined to Sarf London for the last two months, it was finally time to break free of my shackles and head to the bright lights of Castle Park for the World parkrun Tourists meet up.   Castle Park is in Bishops Stortford which is a place I know precisely nothing about quite close to Stanstead Airport.

The most exciting thing about this run for me was meeting up with people who normally only live inside my computer and even better, my school friend Stephanie who I have not seen for twenty-seven years.  I just love the way parkrun gives you an excuse to meet up with people you haven’t seen for decades.  As usual I got there extremely early and, trying to be helpful, I asked if there was anything I could do.  The answer was to assist with the “pre event set up” which this time was dishing out a load of arrows and cones on the course.  You can probably guess that giving these items to someone with no sense of direction who can’t tell left from right is a bad idea.  I ended up putting half the arrows in the wrong place, spent far too long debating whether a left arrow is one that comes from the left or tells you to turn left, and was eventually rescued by a regular who undid all the damage and stopped the runners being sent the wrong way down the River Stort and ending up doing an ultramarathon finishing in London.  I did not attempt to claim a volunteer credit! 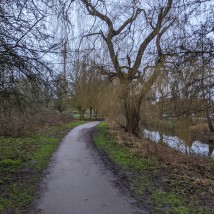 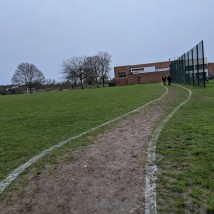 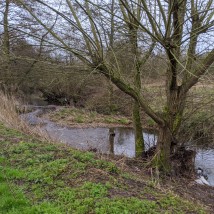 The course was not really to my liking as there was far too much grass and not enough hill (although my ankle doesn’t like hill so perhaps the latter is a good thing at the moment).  The best thing is the nice wide congestion free start – even with 500 people I was pretty much at full speed within a couple of seconds, though of course that full speed wasn’t terribly faster what with the floppy ankle and unsuitable terrain.  Then you run along a path for a bit, and then around a playing field which has been kindly marked out with a white line, then back along a path by  a river (this bit is quite scenic), then you do the same thing again, and then you divert off to the finish which is in the same place as the start.  There weren’t any shoe-consuming bogs but there was a LOT of grass (about three quarters of the whole parkrun) and it was all a bit muddy and slippy and had random holes here and there so I had to watch where to put my feet.  My ankle complained all the way round and I really wanted to stop running and walk instead but I could see Rob walking about thirty seconds behind me and there was absolutely no way I was running 4km to be overtaken by a walker in the last kilometre.  I finished in a possibly-slightly-funnel-ducker-enhanced official time of 36:48. 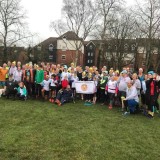 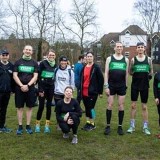 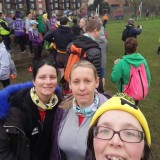 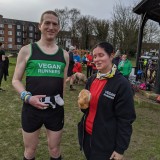 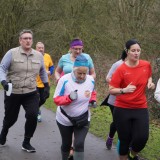 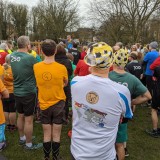 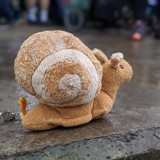 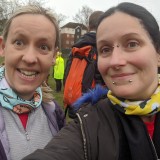 When I finished I found my Cow Bob (that stupid yellow hat all the tourists wear) had disappeared from my coat pocket.  Subsequent examination of my photos led me to spot said head appendage halfway out of said pocket just before the run, so I assume it fell out when someone moved my coat and was then picked up by one of the 100+ owners of identical hats who mistook it for their own.  Just my luck to lose it in a place where it was surrounded by clones.  I put an appeal on Facebook, but no luck so far.  Hopefully some time today someone will realise they have more hats than heads and return it to me.

Brunch took place in the local Wetherspoons and there was a huge turn out with people queuing round the room for coffee.  A very big thank you to Cass Castleton and friends for organising everything so well.  There was even a members’ raffle in which I thought it would be serendipitous if I won a hat… but I did not win a hat.  However, when Cass read my post he messaged me to say he was sending me a free World Tourist Beanie!  How kind is that?  parkrunners are such lovely people!

A bit of a (literal) dampener has been put on the rest of the weekend because Winter Run has been cancelled due to Weather.  We get the chance to earn the medal if we run 10k in our own time, and right now I am putting off doing so by writing this post because frankly it looks bloody ‘orrible out there.