I have been wanting to do RunThrough’s Hertfordshire Half Marathon even since the first event in 2017 – in fact I was on the verge of signing up when I had a stress fracture related relapse and was confined to a hobble.  Last year I was still traumatised from The Marathon and couldn’t bear to run further than a parkrun.  This year it was third time lucky! 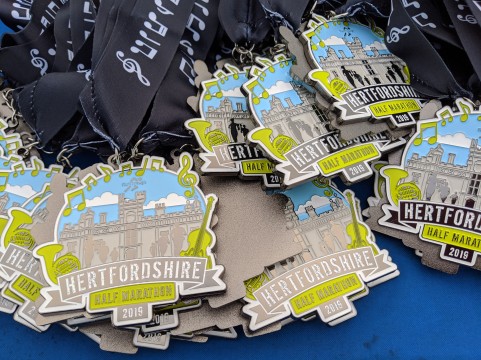 I was particularly eager to do this half because I knew it was a very challenging and scenic course – but the challenge is all of the “hill” variety and not of the “rough terrain” type.  It is all on roads except for a couple of bits of gravel in the grounds of Knebworth House.  However, be warned that the car park is a complete mudfest and you would be very sensible to bring your trail shoes just for that part.  The challengingness of the course meant that a PB was off the table from the start, and as I have invested a lot of time and energy fruitlessly trying to come close to my 2016 HM PB it was nice to run the half marathon distance as fast as I could without a particular target in mind.  However, as the date drew nearer and my ankle continued to complain at me suddenly I realised that there was another issue I hadn’t considered: the cut off.  The roads were closed for a maximum of three hours, and while I knew the lovely RunThrough people would wait for me if I took longer, I still didn’t want the shame of feeling I was holding people up or being the last to finish.  I looked around anxiously at the start: was there anyone who was morbidly obese, had a leg in plaster, or wearing an inflatable dinosaur costume that I had a chance of beating?  No such luck.  There is a certain irony in the fact that small, inclusive events like RunThrough’s actually have a lower percentage of snails than mass participation events where said snails get hoovered up by a street cleaner if they miss the cut off by ten seconds. 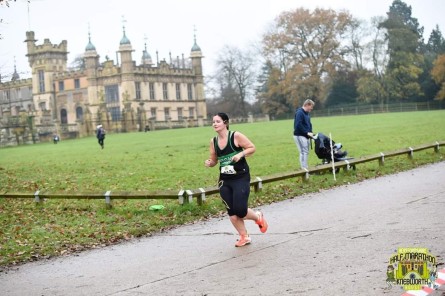 Anyway.   It was too late to back out now. Off into the lovely rolling mist-coated hills of Knebworth it was.  The first 3km was a loop round the grounds of Knebworth House and this was actually the hardest part.  It started with a very steep downhill, which as usual I plunged down like a brick, overtaking about 100 people who then promptly overtook me again at the bottom of the hill.  After 3k we were back where we started and actually had to run through the finish line!  I felt like I could quite happily stop there, but I didn’t.

The countryside is fairly uniform in those parts: a few delightfully named villages like “Nup End” and “The Node”, a few inviting looking farms, the odd sheep and quite a few posh country people who had come to cheer us on.  I got nothing but positive comments on the Vegan Runners vest.    The best bit of the course was an out-and-back where I got to see almost the entire field coming back the other way as I plunged down a hill, and give a thumbs up to all fellow vegans and Runthroughers.    I was quite pleased to see that at this point people I consider to be reasonably fast were only a mile or so ahead of me, but I was less pleased to see how few people were behind me.  The back part of the out and back was a lot harder, because it was all uphill and now there was no one left on the other side to gesticulate at.  Then I saw the sweep up truck.  It was obviously miles behind me, going in the other direction, but it was still there!  Having flashbacks of Barcelona I scuttled along as fast as my legs could carry me, which was actually only slightly above walking pace. 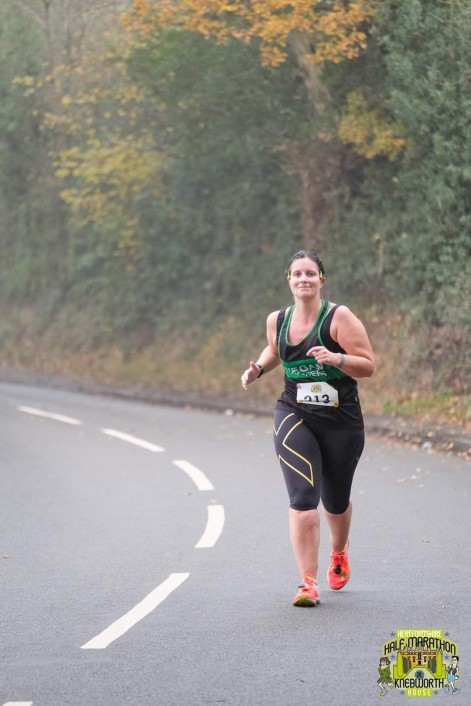 Just after 15km there was a massive hill and this was when I took my first walk break.  After the walk break I seemed to get a new lease of life so I carried on taking walk breaks every now and then until the end.  Everyone in front of me, meanwhile, seemed to be walking with the occasional run break, so I started to overtake people, which gave me a bit of confidence.  I would have liked to run the whole thing without walking but I think I am not quite fit enough for that and may have to run fifteen loops of the dreaded Springfield Hill Peanut to get my stamina up.

The last three kilometres were as hilly as the first three.  The downhill was great and I stopped taking walk breaks and suddenly had enough breath to thank volunteers and admire a spectator’s sausage dog.  Then we reached the uphill, which was the same hill we’d run down right at the beginning.  It seemed like Mount Everest.  I spotted Matt from Runthrough at the bottom cheering people on.  I told him he was an evil man for putting this great big rotten hill at the end of a half marathon!  It is totally unnecessary and he clearly just likes to watch people suffer.  What a meanie.

I would like to say that I  finished strongly by bounding up the hill and sprinting across the finish line but as this blog is a work of non-fiction I will have to admit that actually I was utterly done at this point so I walked up the hill and completed the race with a limp jog across the line, whereupon the lovely Alison from Veteran Runners put a medal round my neck and said “see, you’re not last!” 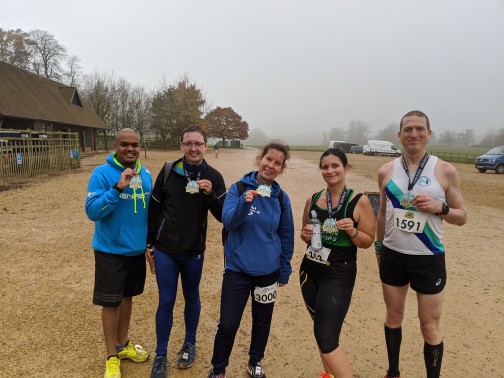 My time was actually 2:52:44 which is actually my fourth fastest half marathon time despite the fact that it was twice as hilly as my second hilliest half marathon (Reading, FYI).  So maybe, just maybe, if I manage to train hard all winter and don’t get injured, if I choose the right course and Weather obliges… 2:35 may be in sight once more.