If you read the last entry you will know that despite suffering from an outbreak of Dodgy Ankle, I was hoping to recover in time and set out to beat Kipchoge’s marathon time of .  Sadly, this didn’t happen and by halfway through my gentle leg-testing parkrun at Portsmouth Lakeside (a parkrun so wet and puddly it should just be called Portsmouth Lake) the inside of my left ankle was painful enough for me to know that this definitely wasn’t going to be my weekend. 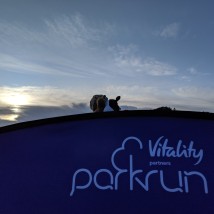 I briefly considered being a DNS, but as you know that isn’t really in my nature, and instead squeezed the offending body part into a compression sock, took all the painkillers Boots had to offer and decided to treat it as a Long Slow Run and a fun day out.  If the worst came to the worst I could always DNF.

For the first 5k I actually felt completely fine.  I think the compression sock was so tight I couldn’t even feel my bad foot.  I actually went a bit faster than LSR pace, as I was caught up in a crowd and it seemed sensible to move at the same pace than everyone else.  From 5k onwards, though, my legs started to tire.  The thing about running with an injury is that it tips you off balance and all the other body parts that are a little bit unbalanced start to grumble and ache and then you start running even more strangely to compensate for your million aches and then it all becomes a bit horrible limpy shuffly thing.   By 10k I was definitely back to LSR pace.

Then disaster struck!  My Garmin crashed!  I was plunged into silence and while the timer was moving on and the buttons were working, the distance wasn’t changing.  Luckily after about a minute of fruitless fiddling I came up with the bright idea of pausing the activity, telling it to “resume later”, then switching it off and on again.  When it came back to life, the distance started moving again, my ears filled with the dulcet tones of Daniel Graves shouting something about death and desolation and my heart filled with relief and joy because I really think that if I had had to run the last six kilometres with no music and not even a Strava activity to show for it I would have had to curl up and die.

The remainder of the race was no fun at all, which was particularly annoying as the weather conditions on the seafront were perfect and I doubt I’ll be that lucky again next year.  For the last 3 I decided to adopt a run/walk strategy – while I could have run the whole thing and perhaps gained a minute or two, it was much less painful if I could give my body a little break every couple of minutes.  I was very glad when I saw the finish line.  I think my expression in the official photos says a lot.  When I got back to the flat I threw my running shoes in the bin and lay on the floor shouting about how I was giving up running and finding a new hobby until Rob told me to shut up and made me go to the pub, where I had completely missed the vegan meet up lunch thanks to the fact that all the vegans are in Fast Wave and I was in Slow Wave which didn’t start until 11:17am (which is an utterly ridiculous start time and I hope they don’t do this again). 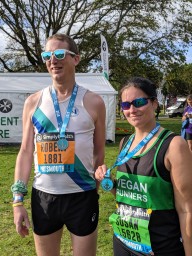 So in the end, my official time was 2:08:24, which was still ten minutes faster than 2017 and not too bad given the circumstances, but I know I can do a lot better and that is why I think I have to go back again next year, even though there are THREE other races that day that I would really like to do.  Also, for the second time I seem to have failed to get an official photo of myself running past the Historic Boats although I did somehow get a very feeble flying feet photo at the finish.