Continuing my calamitous week, today I decided to go to a HIIT (High Intensity Interval Training) class at my gym.  I like HIIT, it is tough but uncomplicated and involves doing the same thing over and over to the point of collapse, then a short recovery, then doing another thing over and over again.  The “things” are all familiar and standard fare of gym classes, Jillian Michaels videos etc, such as burpies, planks, flinging weights around, etc etc.

However today I arrived at “HIIT” and was instructed to get a step ready.  I wasn’t too alarmed by this as sometimes HIIT classes can utilise a step, for instance as something to lie on while you do chest presses.  At the very worst, you might have to jump on and off it for a minute.  However, as the class set in it became very clear that this was not, in fact, HIIT.  HIIT, I later learned, has been moved to Wednesdays.  Friday morning is Step.  Advanced and Complicated Step With High Potential of Breaking Both Legs, I might add.

The thing I hate most about step is that it is unnecessarily complicated.  I go to classes to improve my fitness, not to perfect my ability to memorise a fast moving sequence of gross motor movements whilst trying to avoid falling over a man-made trip hazard.  I could burn as many calories simply running up and down a flight of stairs.  Why do I have to do all these stupid complicated moves in a stupid complicated order? 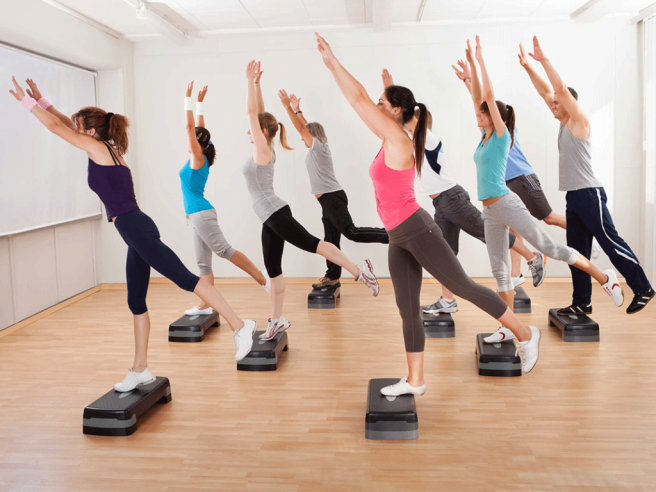 Everyone in the class seems to follow the sequence effortlessly while I am floundering and ineffectually standing on the step, getting off the step, jumping up and down and being very careful not to get my feet tied in a knot.  At first, my performance bears little or no relation to what I am supposed to be doing but gradually I start to pick up the rhythm and proudly and confidently stand on the step and do “three knees”.  Except by that time we’ve moved on to something else.   Then we go back to “three knees” except sadistically the instructor has decided now we are going to do it starting with the opposite foot but my poor, overworked brain hasn’t worked out that I have two feet so I move off in the wrong direction and nearly cause a ten car pile up.

The woman next to me “helpfully” suggests that if I am “getting tired” I could do it some other easier way but I don’t catch what it is because I am bristling at the suggestion that I might be “tired” after 20 minutes of half arsed jiggling that hasn’t got my pulse out of zone 2.  I feel like I need to randomly interject that I have done eleven half marathons and two full marathons and almost one triathlon but I don’t because that would be churlish and anyway the music is too loud for conversation.  It is clear that she, and everyone else in the room has assumed me to be a total noob.

Eventually the torture ends and we get to lie on the evil steps and do chest presses with the bar.  Just to make the point that I am neither unfit nor a beginner, I pick weights nearly twice the size that I normally use and press with gusto.  My upper body is now so exhausted that I will struggle to lift a can of Coke Zero for the rest of the week.