This time last year, I was in a taxi to the Gard de Nord, and the taxi driver explained to me that he’d need to take a diversion due to “feminine joggeurs”.  I researched this further, and found that the “feminine joggeurs” in question were taking part in a 7km women-only race through central Paris called La Parisienne.  This seemed to be the sort of thing I might want to take part in, so I signed up for 2019.

It always amazes me that France is next door to Germany because the French way of doing things seems to me the polar opposite of the German way.  While everything German is simple, efficient and runs like clockwork, everything in France is complicated, unintuitive and designed to test the wits of hapless British holidaymakers.  See, for example, the “Sortie” sign at Gare De Nord Metro that points straight at a gate marked “Ce n’est pas un sortie!” or the fact that one needs to get a medical certificate from their doctor in order to take part in any running race, which means that parkruns have to list their finishers in alphabetical order rather than by time in order to avoid being classed as a race.  In the words of one local at Montsouris: “parkrun hasn’t caught on with the French because it’s just too simple.  They can’t understand that we just turn up and run.  They think there must be a catch.”

La Parisienne continues this theme.  There was so much pomp and procedure that you’d be forgiven for thinking it was a marathon rather than just a giant Race For Life.  Race number collection took place on Friday and Saturday in the Champ de Mars, at the foot of the Eiffel Tower.  It took me about half an hour to find the way in because all the entrances said “Zone Controlee” which I took to mean “special area where riff raff are not allowed” but eventually I realised that this was actually code for “way in”.  My bag was thoroughly searched and the first thing I saw was a long list of rules of things that one could or couldn’t take with them on the course or leave in the bag drop.  (No costumes that cover your face, no fake weapons, no hydration packs.  Who takes a hydration pack on 7km?) The Expo was the most impressive I have ever seen with loads and loads of freebies (mainly edible and beauty related – and nearly all suitable for vegans), things for sale and people playing African drums or dancing to Cotton Eyed Joe.  I collected my number and race t-shirt – the latter was a nice orange colour and design but the downside of a women only race is that you only get those awful “female” t-shirts which only fit beanpole women and of course mine is too small on the arms and saggy round my waist and will probably never be worn again.  Next you could choose your start corral (or SAS – what on earth does this stand for? Stand Around Slot?) but there seemed to be no effort or intention whatsoever to arrange people in terms of speed other than to separate runners and walkers so I chose the second wave for no particular reason. 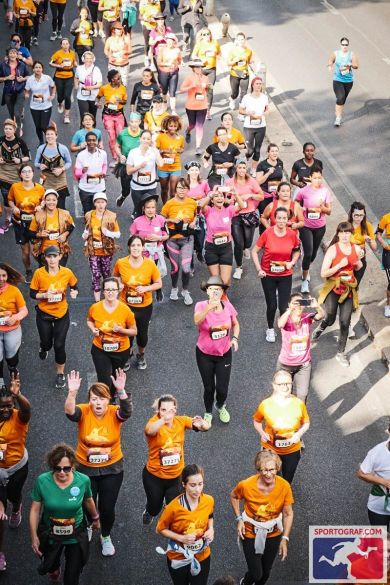 The next day I was back again and entered the Zone Controlee like a pro.  I nearly fainted with shock when I found that despite there being 25,000 runners there was absolutely no queue for either the toilet or the bag drop.  Perhaps this is because everyone was still trying to find their way in.  After a few Eiffel Selfies I shuffled off to Rose SAS for my 10:25 start, thinking I would be nice and early and could find a kerb to sit on and enjoy the morning sun and view.  Ha, ha.  It actually took an entire hour to get from the entrance to the SASes to the start line.  First there was a long walk, designed to get as much sand in one’s shoes as possible, which was suddenly blocked by a bunch of people playing Imminent Starvation covers on African drums, so one had to clamber into an ornamental garden over a spiky fence to continue making progress.  Then there was a man shouting inspiration quotes in French and doing yoga poses.  Finally we walked over a bridge and there was a man on a bridge singing along to rap songs and encouraging people to do various hand movements, which I think might have been some form of warm up.  By now I’d been shuffling slowly towards the start for a full hour, which is longer than it takes to run 7km, and I was very glad to see that there was actually a water station just before the start.

Finally, we were off.  But it was a very slow start because the start was on a cobbled, narrow, uphill slip road with a early sharp turn, and also because as mentioned earlier, the waves weren’t in pace order and there were people right at the start of the wave walking up the little hill, four in a row.  I walked nearly half a kilometre before I could run at all.  This brought me on to a road by the Seine that looks just like Victoria Embankment, which was closed on both sides but runners were supposed to stick to the right.  I decided that as a stupid foreign person I would deliberately misunderstand the rules and ran on the wrong side, which worked well for about three minutes until we headed into the Pont D’Alma underpass.  As any fan of Princess Diana will tell you, reckless speeding in this location does not end well.  I gave up trying to keep to my usual pace and just let myself be carried along by the other runners and decided to treat this as a foot tour of Paris.  Seeing the death place of Princess Di and her memorial at the entrance of the tunnel was oddly fascinating.  Places like the Grand/Petit Palace and Les Invalides were astoundingly grand and wonderful things to run past.  I expect other people feel like this when they do the London 10000 etc, but I’ve lived in London for so long I can run past Buckingham Palace without even paying attention – it was much nicer to have new landmarks to gawp at.

I found the Champs Elysees a bit of a let down though, it’s just a big road with a bunch of trees and not a lot going on and it has more cobbles than Victoria Dock!  Paris streets are generally not in as good a state of repair as London ones.

At halfway, near Invalides, I witnessed the worst idea I have ever seen in a race ever.  A refreshment station serving bananas.  In skins.  No one really needs halfway nutrition in a 7km run, and definitely no one needs to be dodging the world’s most infamous slip hazard!  Somehow I managed to stay on my feet and make it on to the next bit, which was right down by the river, and then there were a couple of twists and turns and before I knew it we were right back by the Eiffel Tower and at the finish!

When I signed up I thought 7km was quite a nice distance, but because I’d run it so slowly I didn’t really feel like I wanted to stop yet.  I would have liked to do another 7k!  Of course, the bonus of doing a 7km is that even if you run at snail pace you still get a unbeatable PB, because it’s the first and last 7km you are ever likely to do! 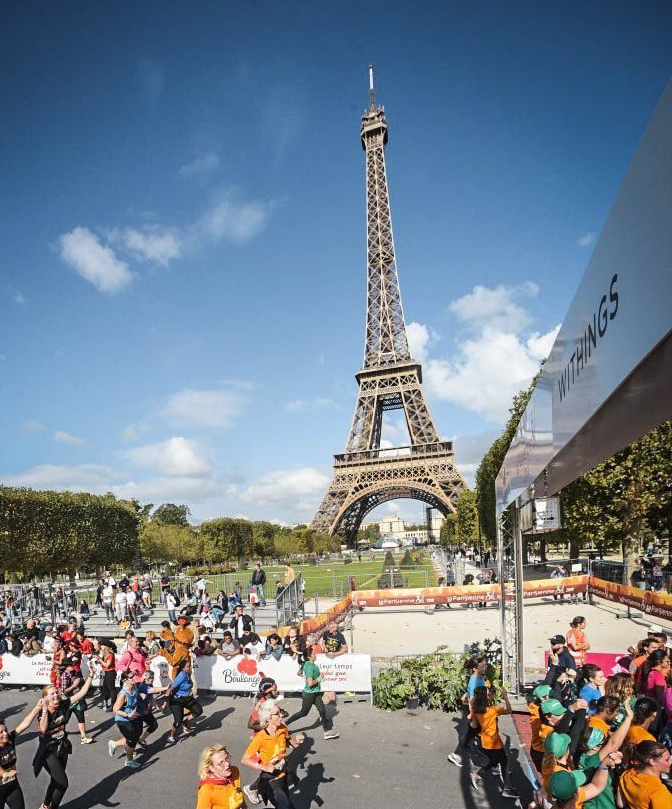 All in all this was a very interesting experience and great for sightseeing, but if you want to take part in this race, leave all expectations about going fast at the door.  It really is a “run not a race” and is more about having fun and celebrating femininity and joggeuses than anything else.  Stick to parkrun for racing.  Oops, I wasn’t meant to say that.