As scenic parkrun locations go, you can’t do much better than a Surrey vineyard  in the shadows of Box Hill.  Mole Valley lies a mile from Dorking station, in the midst of Denbies Wine Estate, the largest vineyard in England, 265 sprawling acres amongst the leafy Surrey Hills, adjacent to the North Downs Way.  It has a large visitor centre, which offers facilities such as weddings, a wine vending machine, an overpriced cafe and most importantly toilets for parkrunners. 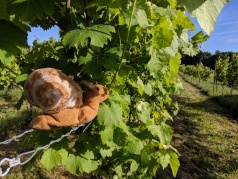 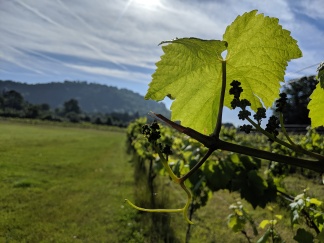 However, as easy-to-run, PB inducing, smooth tarmacked parkruns that will leave your ankles intact go, Mole Valley is probably at the bottom of the list.  Even though it is not quite as hilly as fellow “masochistic parkrun of the year” contenders Hadleigh and Wendover Woods, I actually found it harder because of the completely unsuitable terrain.  I was lulled into a false sense of security by people on Facebook saying that it was okay to run in road shoes – but this is because with the chalk surface, it is unlikely to ever be significantly muddy.  I wore my trail shoes anyway and didn’t regret it – they gave me extra grip on the grass and were more stable on the uneven bits.

Mole Valley started with a lap of a grassy field.  This is the worst grass I’ve ever run on, slightly overgrown, just enough to conceal any irregularities in the surface.  After nearly twisting my ankle twice, I’d had enough and slowed to a shuffle until we were off the field and on to the next hindrance: the hill.   Here the terrain improved very slightly to a grass track with a narrow bare strip worn through it.  (I am not sure why there is a only one track and not two like you’d expect if it was caused by a vineyard vehicle, unless they collect grapes on a motorcycle).  I tried to run on this bare strip but it was too narrow and I ended up doing some kind of stupid motion that made me look like a cross between a tightrope walker and a race walker.  But slower.  I moved on to the grass, which at least was a bit more even, but it was slippery and energy sapping and the backs of my calves started to complain very loudly.

By the top of the hill I’d thoroughly had enough.  I was boiling hot, my legs hurt, I was living in fear of a sprained ankle and I couldn’t run another bloody step.  Thank god it was downhill at last!  Oh.  It was downhill for approximately five seconds, then turned a corner and went uphill again!  Bloody stupid parkrun!

I took to walking at this stage, which gave me a chance to appreciate the excellent view over the vineyard – rows of vines and little purple flowers with the woods and hills in the background.  The view of my Garmin was less attractive.  “Lap pace: 9 mins per kilometre.  Predicted finish:  43 minutes.”  Oh god, that was going to be embarrassing.  Perhaps I could invent some mitigating circumstances?  Fake an injury?  Take a deliberate wrong turn and end up in a wine tasting session?

However, as I was about to discover, Mole Valley is a parkrun of two halves.  As you reach 3km, you turn on to a steep downhill path, which leads on to a PROPER TRACK!  It’s still sandy and stony and a bit uneven, but compared with the first three kilometres it felt like Dulwich!  I saw my opportunity and pulled off my usual trick of plunging downhill like a ten-tonne lorry with no brakes.   I felt like Mo Farah as I overtook about ten people.  Kilometre 4 was done and dusted in less than six and a half minutes and I watched my predicted finish time fall in a rather satisfying manner.  Kilometre 5 started in the same fashion but then came to a crunching halt for the final 200 metres, which were a half lap of the fucking ankle breaking field where it had all began.  At least three of the people I’d overtaken on the downhill overtook me again. 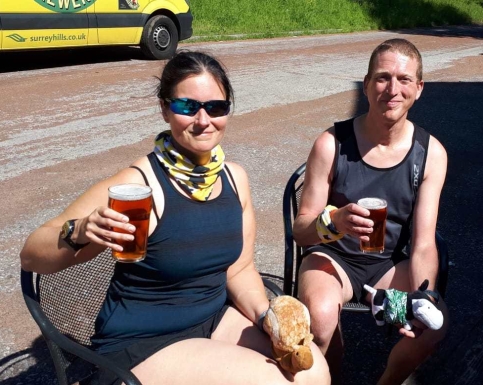 Still, I finished with a fairly respectable time of 38:22 and patted myself on the back for a nice recovery.  The Surrey Hills Brewery bar opened at 10am, so it would have been rude not to have a beer to celebrate.