In two and a half months I will be a triathlete.  So I had better get on with writing some posts about triathlon training.  I will take it one discipline at a time.

You all know how my running is because already because I don’t stop talking about it.

Perhaps the biggest surprise is that after thirty odd years of being an intermittent and fairly indifferent swimmer, I have actually started to actively enjoy swimming.  It is so much more enjoyable when you don’t try to involve a swimming pool.  Swimming pools are full of annoyances, like every lane except two being occupied by swimming lessons, and the remaining two being dedicated to head up granny breaststroke or Michael Phelps-style whizzing from one end to the other with fancy tumble turns, with no in between.  Then there’s the indignity of changing rooms, trying to change in a filthy cramped space that seems highly likely to give me a stinking verruca.  And children.  I’m sure the water amplifies the noise they make.  Even though they are supposed to have their own pool, they somehow managed to infiltrate ours.  And annoyingly some of them can swim better than I can.

Most of these problems, however, can be nipped in the bud by going to open water venues, my favourites being the sessions at Victoria and Millwall docks.  It seems daunting at first to get into a body of water that the mind does not associate with swimming but once you are in, surrounded by towering office buildings and urban flats, it’s an amazing sense of freedom and a little bit of naughtiness.  The water is surprisingly pretty at sunrise, too.  The water temperature is starting to rise and I was quite taken aback to hear myself describing the 15c water this morning as “quite pleasant” and “not too cold”.  At the moment, I must admit that the first statistic I check when I get out of the water is how long I have managed to spend in it without turning blue or shivering to the point where I dislocate my jaw.  I was fine today but after a coached session at Victoria Dock a couple of weeks ago I came out feeling numb and dizzy, and could not stop shivering.  Rob tried to send for emergency whiskey but when that failed he suggested I run up and down Victoria Dock to get the blood circulating.  This didn’t work either because I couldn’t feel my feet and it is hard to run when you have no feet.  In the end spicy Mexican food and tequila based cocktails hit the spot, though I had to keep my winter gloves on to eat them.

My only complaint about my swimming is that it is very slow.  Maybe I shouldn’t care about this because I run slowly and walk slowly and cycle slowly and what else would I expect?  I am trying to work on getting a bit faster, though, since it’s the only part of the triathlon that really has room for improvement.  Speeding up my cycling would likely end up in an upside down bicycle and a broken arm and my running is probably as good as it’s going to get.

When I read tips for triathletes about cycling it’s all “how do a flying mount” and “how to adjust your saddle to make you aerodynamic and save vital seconds” and it all seems a long, long way out of my reach because the tips I need are “how to do hand signals without veering into a bush”, “how to do a U turn in a space the size of a football pitch without major calamity” and “how to get off the bike without falling over”.  (To be fair, from watching triathlons on TV, many elites seem to need tips on the latter).  Cycling terrifies me.  I know some people find the swimming part much more scary because they fear the water, but I can’t get my head round that.  You can’t fall off water.  If you get into difficulty, someone comes to rescue you.  If you fall off your bike, you’re on your own.  No one is going to come along with a mattress to break your fall.  Worse still, if you fuck up on a bike you run the risk of causing a massive crash and killing a load of innocent lycra clad men!  If you drown you are unlikely to take anyone down with you, unless you are particularly spiteful and grab their feet as you sink.

I have had a few successful outdoor cycles.  Once I’m on the bike and moving, I’m reasonably competent and managed a couple of “long cycles” along the marshes, the furthest including a couple of laps of the Olympic Park.  My biggest achievement was cycling up the hill that takes you between Hackney Marsh and the south end of the park.  I realise my concept of a long cycle is considerably shorter than my concept of a long run, and a big hill cycling is a small incline when running.  My weakest skills are manoeuvring at slow speed – negotiating gates, obstacles, traffic, etc, so I have started taking to the local park and making myself look idiotic by attempting tree slaloms, loops of the tennis court, random hand signals when following a circular path,  emergency stops, gritting my teeth through increasingly smaller gates, etc.  I had a very rude awakening when I realised that a local primary school uses said park for a playground, and found 100 maniacal children running at me, but I composed myself reasonably well by veering into some shrubland and dismounting out of sight.

That’s the other thing.  I can’t get on or off the bike when people are watching.  I have serious performance anxiety.  Do you think it will be okay to ask everyone at the triathlon to turn the other way when I get on?

I am conscious of the fact that I have been using my new found love of swimming as an excuse not to get on my bike and this has to end.  Next month (June) I have signed up to a virtual triathlon and I have to cycle a total of ONE HUNDRED AND TWELVE MILES over the course of a month (along with a more manageable 3 mile swim and 26.2 mile run).  This does include the indoor turbo trainer, but even so this is probably more than double the distance I’ve ever done in a month before.  (It is something that Rob would do in a day, but he is a lunatic so it does not count).

I really wish I could just relax and learn to enjoy riding a bike.  It would be so nice to use it as a method of transport instead of a method of torture. 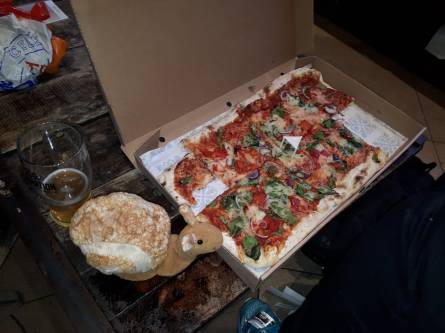 I think it is totally unfair that this even counts as part of your time.  It is full of silly rules like you are not allowed to touch your bike without a helmet on, show anyone your belly button or even take a selfie!  At some point I will have to get my head around the concept of cycling in wet clothes and running without music but I haven’t quite got to that stage yet.  However, you will be pleased to know I have done plenty of practice for T3, which is the stage after the triathlon where you stuff your face with beer and pizza.

One thought on “Why Be Bad At One Sport When You Can Be Bad at Three?”