I’ll start this post with a quick parkrun round-up: Saturday was my third visit to Hampstead Heath, this time for the B course which is very similar to the A course but with a slightly harder “tail” section with trailier trails and steeper hills – it also finishes significantly higher than it starts.  I was very pleased to get a four minute course best of 37:46 and not walk any of it (even if my running did drop towards walking pace on the never ending hill).  I also dragged my friend Moz along – only her second ever parkrun. She swore and complained a lot and then texted me later asking when we could go again.

On Sunday I headed into Central London to watch the London Marathon, firstly with the Vegan Runners and then with the RunThrough lot.  I saw the elites from the vegan cheer point – Mo Farah, Kipchoge, Vivien Cheriot,  Charlotte Purdue, Lily Partridge, David Weir, Paul Marteletti and Really Fast Vegan Man amongst others.  I even managed a few snaps for Facebook, where my friends immediately pounced upon Mo Farah’s heel strike and postulated this was the reason he “only” came 5th.  (It must be hard to be an elite, imagine running a 2 hour marathon and being disappointed!  It is so much easier if you have low expectations.)

I couldn’t stay with the vegans as long as I liked because I wanted to get to RunThrough before Linda came through, so I hopped on the DLR.  At Crossharbour I found Happy Deaf Mike standing on a stool wielding a sign saying “RunThrough are here”, Lucy screaming her head off and various people proffering sweets.  We had so many sweets, in fact, that the runners found them surplus to requirements and Petra and I ate so many that we were nearly sick.   We totally failed to spot most people we were interested in seeing (Nic, Rainie from EastEnders, Alessio from viewtube, etc) but were extremely pleased that we missed Karaoke Man (I would have had to throw the remainder of my sweets at him).  Then along came Linda!  There was no missing Linda as she gave us all a big sweaty hug and set off at a pace that had dwindled somewhat from her speed-of-light start – but it was still good enough to get her a stonking PB of 5:13.  Next followed Lou, who was suspiciously happy, Jarnail, who munched a handful of vegan sweets, and Allison, who told us more detail than we needed about the portaloos.  All three finished sub 6. 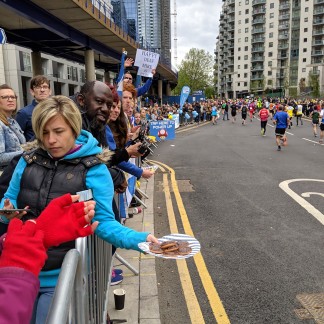 Then it was time to wait for Rob, who had decided that if he wasn’t going to finish in an impressively fast time, he would finish in an impressively slow time, and thus joined a group called the Blue Start Snails who were planning on keeping with the 7:30 pacer.   He took along my little parkrun mascot, Samuel, for the ride (and apparently Samuel appeared on the BBC coverage, though I haven’t seen this myself yet!) Unfortunately, this is going to be where this post hits a sour note.  Note that the 7:30 pacer is an official pacer with a flag, advertised in all the marathon literature, and the cut off time for the London Marathon is 19:00 – eight hours from the last runners’ start time.  You would be forgiven for thinking that if you wanted to complete the course in seven and a half hours, you could do so with support and encouragement, but this is not the case at all.  The “runners info” booklet does say that participants who fall behind a seven hour pace will be asked to move to the pavement, but the full implications of this are not clear at all.  The poor snails were squirted with detergent from a street cleaning truck, honked at by a parade of closing cars, subjected to the stench as the portaloos were emptied in front of them, deprived of water and gels as the aid stations closed before their arrival, and their splits went untracked from 30k as the timing mats were pulled up.  The 7:30 pacer – who had trained for weeks to perfect the pace, just as a faster pacer would – was yelled at to get off the course and received hassling phone calls telling her that if she didn’t have a significant group around her, she would have to pull out of the race.  That’s gratitude for you.

I’ve had some pretty soul destroying back of the pack experiences but I have never seen anything like this – participants who were well within the advertised cut off being treated as an inconvenience.  I only meant to walk with them to the next DLR but I felt I wanted to stay as a gesture of solidarity – in fact I had half a mind to lie on a timing mat to prevent them from pulling it up.  The way London Marathon treats their slower participants is not on, and I was so glad that I wasn’t taking part.  If you want a seven hour cut off, advertise a seven hour cut off.  Don’t pretend to be inclusive and then exclude people.

I left the party at Poplar and headed to Stratford to meet Camilla and Ken taste some beer and take the sour taste out of my mouth.  We were eventually joined by Rob and Samuel, who finished in 7:28:02.  This is, of course, a Good For Mollusc time so maybe I will see if I can get him into Boston next year.  At this point, Rob discovered the final indignity was that he had been given an extra-small finishers t-shirt, despite being about sixty feet tall.  Presumably this was all that was left after seven hours.  It was just about the right size for Samuel.   It was quite interesting to see a normally-fast person’s reaction to the things slower runners have to put up with and to an extent take for granted.  I have too many incorrectly sized t-shirts to count.

The thing is that slow runners feel embarrassed that they’re not fast enough to get the experience that faster runners get, so they don’t speak up – but we should.  We pay the same fee and we train as hard as everyone else and we have every right to be supported.

One thought on “The London Marathon: not for snails”