Oh dear. I seem to be terribly behind on my blog posts.  I must have been far too busy training to have time to write about training.  Anyway, I’ll pick up where I left off, which is somewhere in the Eastbourne Travelodge after being pelted with hailstones and eating vegan kebabs in Brighton.

The first calamity of the day occurred at Hampden Park station, where the only bench was occupied by a small tabby cat.  Figuring it would jump off as a stranger approached, I sat gingerly on the opposite end.  I like cats, but they make me sneeze, so I tend to stay away.  The cat, however, promptly got up, wandered over and sat squarely on my lap. I didn’t have the heart to kick it off, but I didn’t want to touch it either, so we sat awkwardly for about ten minutes, in which time I wondered if it would follow me to Brighton and all the way round the 10k.  Fortunately some people who actually paid it some attention turned up after this, and off it went. 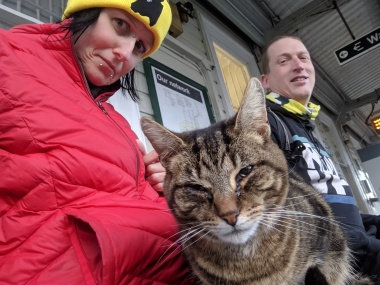 Some time later, we arrived in Preston Park, collecting Andy and Christine along the way.  I spent some time sitting on my stupid plastic bag trying to make all my cold weather gear fit in before handing it to the baggage truck people, where it promptly popped open again.  Then it was off to the corrales, where I started to have flashbacks of the sickening nerves and “run over by a truck” feeling of 2018, and couldn’t decide whether I was glad or sad that I will never have to experience that again.  Rob disappeared in the direction of the “fast people” corral and Christine to the “actually doing the marathon and not the piddly lazy person’s race” corral.  Andy and I were left in the Snail Corral.  I knew that Andy runs at a similar pace to me (at least at the moment because he has recently had knee surgery) and was therefore a little surprised at his incredibly fast sprint start where he left me in a cloud of parkrun orange dust, although I did eventually catch him up somewhere near The Gloucester.  (Perhaps I should try a sprint start in future, since we’ve established that I am shit at a sprint finish).

The first 5km of the 10k route is the same as the marathon route, except instead of going all the way around Preston Park with that evil hill, it just heads straight down London Road, loops around the town centre, then up past the Level on to Lewes Road, with a small loop round The Road Where My Horrible Ex Lived.  I feel like they’ve put this bit in especially for me – it’s just a little side road and there’s no particular reason for it to be there, but as I trundled up that little hill I looked right at that house and imagined he was still in it and thought of how much better my life was now I wasn’t cooped up in his dirty little attic having endless arguments about whether being a decent human being is a worthwhile exercise. 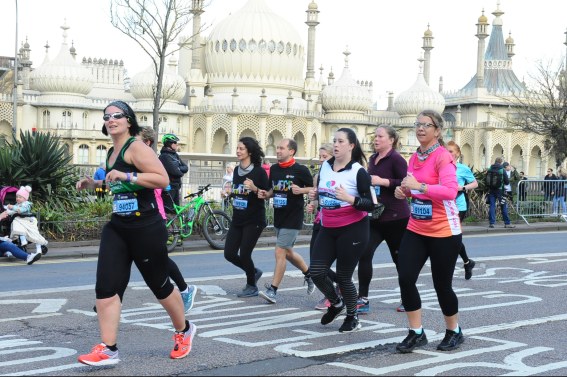 And then it was on to the beach!  While the marathon turns left towards the Marina and Rottingdean, the 10k turns right towards Hove but doubles back before actually getting there.  I had it into my head that it would get much harder at this point because in several Brighton races there has been a severe outbreak of weather to greet me, but this didn’t happen and I continued at much the same speed  Somewhere along the seafront my friend Deb overtook me at great pace (which seemed to decrease once she was out of range… I think she was showing off to be perfectly honest).  I was very glad to see a water station at 7km as there hadn’t been once since 2km (which is far too early for water) and confused to see another one at 8km.  What is that all about?

Suddenly I realised that I was nearly done already and picked up the pace for the last kilometre.  At this point it hit me that I was enjoying the 10k so much more than I’d enjoyed the marathon, and any regrets about not entering another left my mind.  Last year I could barely pick my feet up as I finished, this year I flew across.

(Let us not ruin this happy post with a big rant about the 30 minute wait for baggage in the freezing cold with no option to go back for a silver wrappy thing or escape and come back later.  Okay, just a little rant. )

My finish time… 1:13:55!  I wasn’t trying particularly hard to get a good time so I was surprised to find this was actually my second or third fastest 10k race ever.  (My fastest is 1:12:55 from a Chase The Moon last year – but I ran the first 10k of the fucking 2016 Brighton Half in 1:12:36 – I’m not sure which should count as my PB!)  Anyway, it was quite fast and this has inspired me to mount a 10k PB attempt at one of the Chase The Suns soon, except there has been a lot of weather this week so maybe I won’t.  Anyway, I was very pleased with the whole thing and had a lovely day.

Also congratulations to Christine, Sam, Jason, Marianne, Chloe, Stu, Janet, Matthew, lots of vegans and everyone else who ran the grown-ups’ race – most of whom I failed to see entirely because of aforementioned baggage palaver but I was there cheering you on in spirit, I promise!