Two weeks and three days until London Landmarks, so I had better bring you up to date with my latest training.

Last Thursday, two days after running 10 miles in the sun and coming home with tan lines, I went to the viewtube track session and got absolutely soaked to death.  For some reason the Olympic Park track seems to pool water really badly and my Saucony Fastwitch shoes seem to be designed to let as much water in as possible.  I let off a few works in the direction of poor Coach Mike.  My displeasure was only slightly mitigated by the fact my Garmin reported my VO2max as a notch higher when I finished.

Last Saturday I returned to Mile End parkrun.  This will be a regular (every five weeks) fixture for me as I now work in Bow instead of Waterloo.  As much as I like collecting new and exciting parkruns, I also like a repeat performance.  Firstly, it’s a lot less stressful if you already know where everything is and have already produced the necessary blog post, and secondly, you get a more realistic picture of whether your times are improving if you run the same course.  My last appearance at Mile End was in November, and I was in pretty good form at the time and a little concerned that I have gone off the boil a trifle since.

I fired up my Garmin into “race a previous activity” mode.  It was neck and neck at the start, but I started to get away from it in the second lap.  I really like the Mile End course for two reasons, firstly the perfectly spaced not-too-steep hills, and secondly the fact that you can see the other runners coming back the other way enabling me to wave hi to Andy and Christine and fail to articulate any comprehensible words of encouragement in their direction.  I also ran a little way with a nice vegan lady in a “Vegan Athletes” vest.  She walked all the hills and left me for dead at the sprint finish.  I guess this is the difference between a vegan runner and a vegan athlete.

My finish time was 35:58, which was nearly a minute faster than November, and I managed to get showered in the stadium (a bit spartan and not very warm, but better than going to work stinking of  Eau de parkrun) and get to work by half ten.

Tuesday was the pinnacle of my long run schedule and also the point where I decided that I simply could not run around Tottenham Marshes et al ever again, and decided to head north along the towpath instead.  What a stupid idea!  The high point of this run was some beautiful scenery around Cheshunt Lakes and Lee Valley Regional Park.  The negatives were: 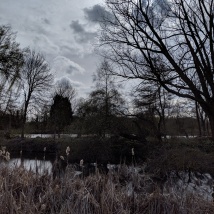 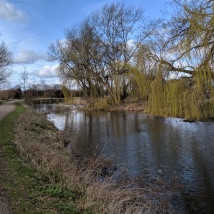 It was almost bedtime by the time I got back.

I will just go to Tottenham Marshes next time.

2 thoughts on “More Half Marathon Training”