Ally Pally parkrun has been staring me in the face for some time.  If I look to my left right now, I can see it from the end of my garden.  (Actually I am a bit short so I would have to stand on my chair to do so.  But some of my friends can.)  As is always the way, because it is so close, I’ve always thought “I can do that one any time” and thus haven’t done it.  Until today.

I have to say it was completely different from what I expected – my expectations being based on reports of their summer course (the one on the website), which is by all accounts a cross-country mudbath hillfest (two loops of the park and an out and back of the main avenue).  The winter course is three laps of the smaller upper loop, comprised of the main avenue and a trail path, with the downward steep hill substituted with a less V shape section.  The summer route is anticlockwise but the winter route is clockwise.  Be warned, there are absolutely no toilets in the area that are open before the start.  I used McDonalds in Wood Green, which is about 15 mins walk away.  The start/finish seemed particularly well organised – for once I actually heard the run director say “go” right from the back.

I didn’t realise there was quite so much tarmac on this course and turned up in my Hoka Challenger trail shoes which turned out to be a major error.  50% of the course is tarmac and this bit is all uphill (starting very gently and moving on to a very steep bit that makes you want to get your ropes and poles out).  Hoka Challengers are a fat, heavy, inflexible shoe that are great for running in mud and other unsuitable terrain but on uphill tarmac it basically feels like running with lead weights in your feet.  With each lap, the point at which I started walking got a bit earlier.  I couldn’t make any time back on the downhills either, because it was a wonky path with a lot of trip hazards (we saw two people fall – fortunately not injuring themselves) that tilts sideways to the right, as it’s on the side of a hill.  It was particularly awkward on the second lap, where I had a stream of faster runners passing me on the left.  I have to say the whole route felt rather unergonomic and I just kept thinking how much easier it would be clockwise.  (Maybe it was started by masochists who don’t like to make things easier for themselves.  Ultra runners.  Leyton Orient fans.  Those sort of people.) 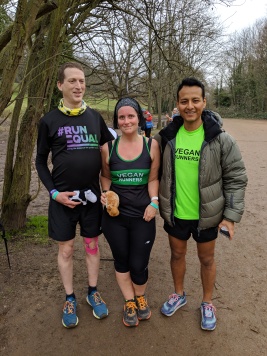 I was glad that I had a proper excuse to take this one easy – in that I have a 10k to run tomorrow and don’t want to exhaust my poor delicate legs.  I ended up walking about a third of it (the tarmac bits!!) and finished in 40:29, which amusingly is exactly the same as the time I recorded at Victoria Dock last summer.  I beat Rob again but this is only because he not only walked with a dodgy knee, he stopped halfway round to have a chat with a marshal and had to be cattle-prodded onwards by the tail runner.  My other friend Victor lapped me, but only once!  I was rather glad when it was all over and I don’t think this was really my kind of course so I probably won’t do it again – definitely not in the winter, anyway.

Don’t ask me what my Garmin had to say after this.