Last New Year, I decided to give the New Year’s Day parkrun a swerve entirely, figuring that New Year’s Eve was a night sacred to drinking and that New Year’s Day was a perpetual right-off.  I ended up in some shit 80s club standing around with a load of bored, grumpy people and a Star Wars actor no one had heard of signing autographs.  I managed to salvage a bit of fun from the night by doing a runner to Slimelight where they charged us £20 each to get in and £5 for a pint of warm Guinness.  The next day when I got up to see everyone’s doubleparkrun posts I was consumed with envy and decided that New Year wasn’t sacred to drinking after all.

This year, I was tucked up in bed long before midnight and my alarm went off around the time I had been leaving Slimelight the previous year.  The doubleparkrun ahead of me was the fairly local combo of Grovelands and Oak Hill.  Grovelands started at 9am and Oak Hill at 10:30am, and with a 3km walk between them I figured this would be a pretty easy task, unlike the popular combo of Wanstead Flats (9am) and Valentine’s (10am) which would have required a PB on trail followed by a Bradley Wiggins impression for me to make Valentine’s on time.

I’ve done Grovelands once before and it wasn’t my finest hour.  It was the week before the Brighton marathon, I had a cold and I generally felt like I’d been run over by a bus.  I distinctly remember feeling very sick at the top of the hill, and spending the entire run thinking that if I was struggling with a mere 5km how on earth was I going to do 8 and a half times the distance in a weeks’ time.  I hoped I’d enjoy it more second time round as it is a parkrun that ticks all the boxes (lake, hill, tarmac, toilet, not on the moon). 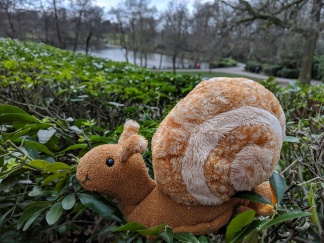 Everyone assembled at the start at Grovelands at 9am prompt and I naively assumed that we’d start bang on time as we had to get to Oak Hill by half ten.  However, the pre run waffle seemed to go on and on and on and I watched the time tick on and on until eleven minutes past nine.  Congratulations Bob on your 59th parkrun! If you’re a dog, remember to stay on a short lead!  Happy New Year to everyone who has ever volunteered or run here!  Cake!  Boobies!  Whatever!  Tick tock, tick tock.  I started to think that I was going to need to run a PB just to get out on time.

Thanks to my new Garmin 645, I had the opportunity to race my previous activity.  This is a marvellous function for people like me who are fiercely competitive with their previous performances.  I wasn’t really sure if I should go flat out in order to finish in time to get to Oak Hill or actually save enough energy to be able to run when I got there.  I settled on just aiming to beat my previous time of 38:39.  Unfortunately, I had a bit of user error at the start and spent the first 50 metres or so valiantly struggling for the “Start” button, nearly tripping over a dog and running into a tree in the process.  Eventually I found it, and for the first lap I was just about keeping pace with Past Me.  As I went up the hill on the second lap, however, I found I was giving Past Me the slip and was nearly a minute ahead by the end of the second lap.  (Past Me had to walk the hills.  Present Me ran the whole thing).  By the third time up the hill, I’d left her for dust, nearly two minutes behind!  Take that, past me!

My finish time was, according to my watch, 36:15, but according to the official results 37:27.  I am not quite convinced the official time was right because I’m sure my watch-fumble at the beginning only lasted twenty seconds or so, but never mind.  Whichever way you look at it, it’s a course PB and 37:27 is a mark on the Stopwatch Bingo card, so I’ll take it.

I had envisioned a prompt exit but this didn’t go to plan either.  For a start, Grovelands had run out of tokens so I had to take a piece of paper with my barcode with my finish number, and the queue for barcode scanning seemed to go halfway round the park.  Trying to locate my possessions also proved problematic as somehow my coat, hoodie and bag had all ended up in separate places.

By the time we left the park, it was just past 10am meaning we had half an hour to walk 3km.  I found I was not able to walk this fast and in scenes reminiscent of my last trip to Finsbury Park I valiantly tried to keep up with Rob as he strode up the hill and failed.

Thankfully the parkrun gods took pity on us and a nice man with a CAR pulled up alongside us and offered us a lift.  I have never been so overjoyed at the prospect of getting into a car with a complete stranger in my life and eagerly accepted.  Fortunately the complete stranger was a nice man and not a murderer.  He had driven up from Portsmouth in search of two parkruns he had not yet done, and (like us) all his friends had been too hungover to join him.

We arrived at Oak Hill in good time and were met by Rosie, who was joining us for a run, and the rest of her family, who were providing coat-minding/cheer squad/photographic duties.  This was my first time at Oak Hill.   As everything was a bit chaotic, I’m not sure I took it all in and I completely forgot to get any photos of the actual park so I think I will have to go back and do it again. 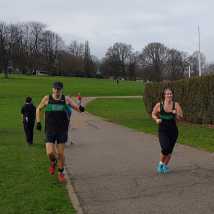 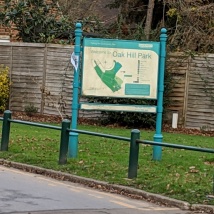 The park is actually in a very hilly area, and there are some Massive Hills in the park, but the bit you actually run on is flattish.  But not flat, and it felt to me like 90% of the run was uphill with only a teeny downhill at the end of each lap.  It is like one of those never ending staircase optical illusions.

There are two and three quarter laps and the meeting place is the finish, so the run starts with a mysterious trudge to the start.  The start is very narrow so there was a good ten seconds between someone saying “go” and actually having anywhere to go, and even when I had somewhere to go my legs didn’t particularly feel like going anywhere, so I just shuffled and waddled for half a kilometre until finally they got the message and I managed to overtake a few people and get away from the spectre of the tail runner.  I had no real ambitions about time on this occasion and just ambled around, vaguely pleased to see that I wasn’t dropping below eight minutes per km.  I finished in 39:30, with some encouragement from a random vegan named Mike who had jumped out of the bushes.  (I know he was a vegan because, like me, he was wearing a Vegan Runners top.  He wasn’t waving avocados in the air or holding a placard about eggs or anything).

We finished New Years Day with a walk along Pymmes Brook to Arnos Grove (where I refused to walk any further and insisted on getting on a tube), a hunt for a vegan restaurant that turned out to be closed, ridiculous amounts of food in The Real Greek and a few beers in Tap East in Stratford, which was pleasantly deserted, unlike horrible packed New Years Eve pubs, and I was home in time for the EastEnders New Year Special.  A much nicer New Year Celebration than all this going out rubbish.