I will start with the good news, which is that on Wednesday I got myself a new overall 10k PB on the running track.  I set myself a target of 1:10 (previous PB being 1:10:54) and employed a tactic which was basically running just a little bit off flat out and trying to hold it out for a kilometre at a time, making sure I didn’t go below 7 minutes for the first five kilometres.  When I got to six I started doing maths in my head to work out how far I could go off the pace and still come in on time.  I think I am more impressed at my ability to do maths on the move than my running ability.  I came in at 1:09:33 and was absolutely delighted but also very angry that Strava refused to give me a little gold medal next to the activity for absolutely no reason.

Spurred on by this, I decided I was going to get a course PB at an absolutely freezing cold Finsbury Park today but of course two things going to plan within one week was probably pushing it a little.  Rob very kindly offered to attempt to pace me round in 35 minutes.  The trouble with Finsbury Park is that you can’t just stick to a steady pace, you need to make up a lot of time in the first and third kilometres  because two and five have The Hill in them and four has a lot more up than down.  There is a very real danger of making up too much time on the first kilometre, particularly running up the draining long slow incline, and this was precisely what I did today.  (It’s not the first time I’ve done that either.)  By the time I reached The Hill I was choking on the cold air and feeling a bit green.  From then on my pace was completely off and I just could not keep up.

My final time was 36:55 which I suppose isn’t too terrible although a long way off my course PB of 35:40.  I guess it just wasn’t my day.  Probably the fault of the weather. 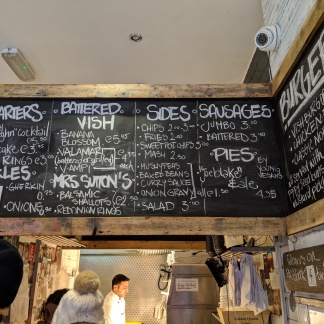 After the run (after a brief panic when Rob lost his trousers… don’t ask) me, Rob and Petra went to Sutton and Sons vegan fish shop in Hackney.  Petra and I both had the banana blossom fillet, which wasn’t anything like fish but was still really good (similar to jackfruit) and Rob had Vampi (vegan scampi) which were uncannily fish-like – they even had the pink markings on the back.  I think you could fool an omnivore with them.  We need to go back and try the Valimari and the Vish Burger but that was enough for one day.  I have retreated to my nice warm flat until the weather stops.