Mile End is the tenth closest parkrun from where I live and one I have been saving up for when it gets too cold to be getting on trains to Darkest Essex.  That time has definitely come: in fact the average temperature as per my Garmin dropped from 22c to 6c between my last parkrun two weeks ago and today.   Note that it has gone from “too hot to run” straight to “too cold to run” without ever hitting that “perfect running weather” spot.  Every year I get a bit of amnesia about how much I hate the cold and think I’ll be fine running in a vest.    I was not fine running in a vest.  I was so cold that I couldn’t feel my hands.  This was particularly problematic as I have lost seven kilos and my running tights kept falling down but my hands were too cold to get a grip on them to pull them up.  I’m not sure how I am going to get through the winter in one piece. 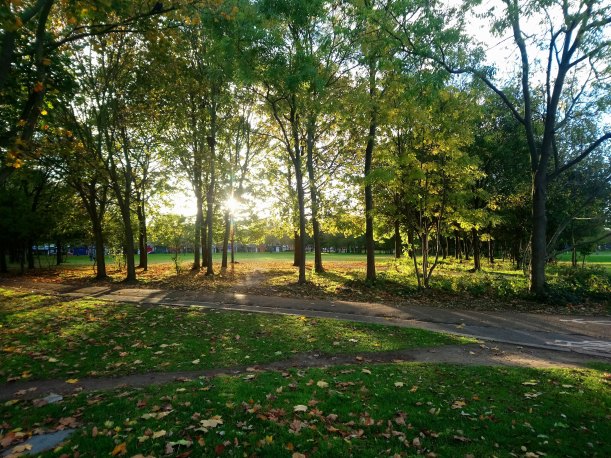 Hypothermia inducing weather aside, Mile End parkrun exceeded my expectations.  On the map, Mile End park doesn’t even really look like a proper park, just an extended verge that nestles between a scabby main road and a scabby canal, but once you get inside you can see that someone has made a real effort to turn this small space into a proper interesting, landscaped park with different terrains and facilities such as a children’s playground, an athletics track and tennis courts.  It’s like the outdoor equivalent of the Tardis.  And with landscaping of course comes hills.  Not monster bastard hills like Finsbury Park Hill, but pleasing medium gradient man-made hills that roll just the right amount.  And there are a lot of them.  Each lap has five ups and five downs.  The biggest “up” is the Green Bridge, which takes you over the road to the next section of park.  There’s also a small section on each lap along the canal towpath.  The path is a two way cycle path (luckily there were no cyclists around at this time of day) and the paths are pretty good, although there’s a few speed bumps (made of a cobbled ridge) that you need to look out for.  Miraculously I managed not to trip over any of them.  What I particularly liked about this course was that you got to see your fellow runners coming back the other way and wave encouragingly/pull faces at each other on several occasions, whatever their pace.  This is so much nicer than being lapped by your friends.  There are only two laps, so I was only lapped by a handful of very fast runners (one was sub 16).  I don’t mind being lapped by these people, I just don’t like being mown down by huge swarms of average paced runners or being lapped by people who appear to be moving slower than I am.

There were a few Viewtube Runners in situ as Marcin was celebrating his 100th parkrun, and from the RunThrough contingent, Linda and Petra were popping their parkrun cherries and are guaranteed to be sporting cow-cowls this time next year.  I don’t think I actually saw any Cow Cowls other than my own and Andy Sawyer’s (which doesn’t count because Mile End is his home run and he has done it 59 million times).

As we were going on to the Poppy Run afterwards (more of that to follow in separate post) I decided it was not a good time to be trying for a PB but put a reasonable amount of effort in and was delighted to get a time of 36:48.  This was pretty much identical to my time at Southend a month ago but with approximately three quarters of the effort.  I was therefore disproportionately devastated to discover there was a small timing error in the official results and I had been credited with 37:33!!!  I pleaded to the volunteers to look into it and they have my eternal gratitude because they actually fixed it pretty much straight away. 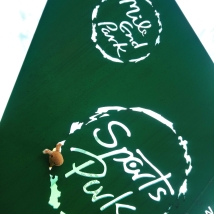 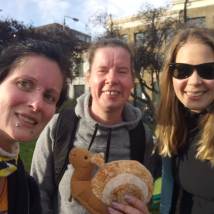 After the traditional selfies and abuse of Samuel Snail, it was up Grove Road to Victoria Park for the Poppy Run, which will get a post to itself.

(Important tourist information for those who need it: the nearest tube is Mile End (10 mins walk away), I believe there’s a loo in the stadium although I didn’t use it, there is a little van that sells refreshments at the start/finish.)

Also, the latest on Egg-gate: Vegan Runners have encouraged as many vegans as possible to turn up to parkrun and show their distaste for the egg industry in whatever peaceful way they see fit.  The inflatable chicken suit went to Ashton Court parkrun in Bristol and was joined by a second.  I really hope this will be a growing trend.  (Picture below by Hugo Carpindale.)  I have joined Vegan Runners and have set it as my running club on my parkrun profile, and a vest and hoodie are on order.  I don’t think anyone tried changing their name this week!