I was less than halfway into this morning’s workout yet I had already mentally composed most of today’s joyously positive post.   Since cutting down on sugar I’ve lost 2.3kg in 10 days and my resting pulse has gone down to 52 (from 55-60).  Even better still, today I followed advice from cycling friends and cycled up a little hill with much more ease and grace than previously managed, and then cycled in loops round Tottenham Marshes so fast that I didn’t get overtaken by a single runner.

All this fun and frolics was part of the the “Your Mile Challenge Virtual Duathlon” which is another of those thingies designed to give people too scaredycat to do a proper duathlon an easy way in.  I cycled to Tottenham Marshes as my warm up, then ran a loop of the marsh at a relaxed pace (partly because there was a lot left to do and partly because the sun suddenly came out and I had dressed for the arctic and was sweating like a pig.)  Then I got on my bike and set out for 5 two kilometre laps of the north part of the marsh.  I took the plunge and even used the fastest big gear and finally I was cycling above snail speed.  I overtook a runner!  I even overtook some other cyclists although admittedly some of them were well under the age of 18.  I felt like Jonny Brownlee!

Unfortunately, as I got to about 3.5km, I heard a strange clicking sound from beneath me.  I slowed down, but couldn’t identify where had come  from.  The pedals felt fine and the bike was still moving forwards…

Clunk!  Suddenly my saddle tipped back and I was catapulted towards the pannier rack in the manner of a reclining chair.  I previously proclaimed that I was completely unable to cycle standing up; it turns out this is not true, as when one’s saddle is at a 45 degree angle one suddenly learns to cycle standing up.  Miraculously I managed to stop without falling over and surveyed the damage.  The saddle fell off in my hands. 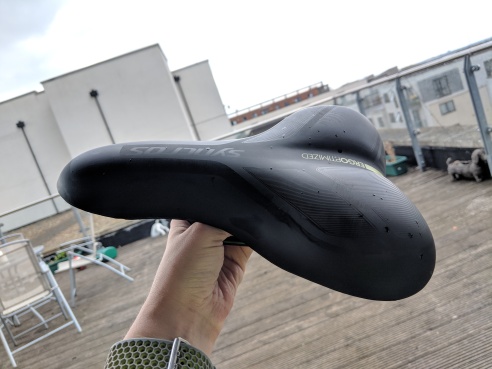 I bet this never happens to Jonny fucking Brownlee.

I didn’t have anything with me to screw the saddle back on with so there was nothing for it but to push the lousy contraption three kilometres home in the lousy pissing rain.  A second attempt at the virtual duathlon will take place once I have remembered where I put my hex key set.