This weekend I did a lot of running related stuff but not a lot of actual running.  Most of this centred round the Hackney Festival of Fitness.  But first of all, there was Wanstead Flats’ seventh anniversary.  I didn’t want to run because a) I was doing the Hackney 5k later b) it’s a trail run and you know how I feel about those.  So I volunteered my services as photographer instead.  This made me a bit nervous because volunteering to take photos means that you must think you are half decent at it whereas to run you don’t have to be good at running.  Generally I am better at taking photos than I am at running (though that isn’t saying a lot) but I have never taken photos at a parkrun before.

Anyway, the parkrun set off and I hid in a grassy knoll getting a nice view of the runners setting off in front of the iconic Twin Towers of Wanstead.  I then picked myself up and attempted to run to my next spot before the faster runners had completed their first loop of the forest and started coming back the other way.  I did not succeed!  But I snapped away furiously and moved along the path and I think I got a photo of nearly everyone although the medium paced runners were a bit hard to capture as there were so many of them.  My focusing needs a bit of work and the photos in the sun are definitely better than those in the shade but on the whole I don’t think they came out too badly for a first time.  Here are a few of my favourites: 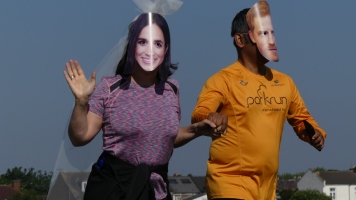 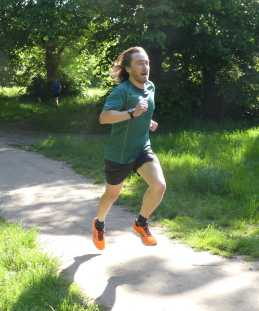 After parkrun we went to the View Tube café for brunch, where I had a slice of vegan carrot cake and everyone who pretended not to care about the Royal Wedding surreptitiously watched it on their mobile phones.  However we started getting bored when the religious American started going on and on so we upped and walked through the Olympic Park to Hackney.

The Hackney 5k is the little brother of the Hackney Half, and it’s a free event.  It’s at 2pm, which is a rather odd time, and I didn’t care for the route much (over 50% grass) but it was well organised with a water station and a great medal (same design as the Hackney Half).  Here is a photo of me with the other ViewTubers before the race.

I had hoped to run the whole thing, but when I realised just how much of it was going to be on grass I thought better of it and walked about a kilometre.  Finish time was 40:58, which is lousy, but not quite as lousy as my times at Clapham and Newcastle, and my legs didn’t hurt, so this is all good.  It was nice to do an event with the running club and cheer on anyone in a green vest.

I went home and started work on the parkrun photos.  It is only when you go back through them that you see all the moments you’ve inadvertently captured.  A man having a pee in the bushes, the second finisher with his shoelace undone, the mum pointing the camera out to a small, sulky boy who immediately turns into Mo Farah and sprints past me with a big smile on their face.  I found most people who did a comedy jump or similar did it when they were far too close for me to capture as I was shooting runners at a distance with the zoom.  Having two cameras, one zoomed and one not, might be useful next time.  Although I would probably need two pairs of hands too.

The next day was another early start, this time for the Hackney Half.  I’ve run it twice before, in 2015 and 2016.  In 2015 it was merely bloody hot, in 2016 it was absolutely ridiculously hot.  Yesterday did not break with that tradition, so I was very glad that instead of running it I was giving out water bottles just after the 3 mile mark, again with the ViewTube people.  All the races I’ve run and it’s never really occurred to me that some poor fucker has to open every single bottle of water before it’s handed out.  Yesterday I was that poor fucker.

At the water station (photos by Frank again)

At the three mile mark the runners haven’t really spread out yet and everything happens at once.  At first all the runners ignored me as they tend to take water from the first table and I was at the end.  (I noticed that we had lined ourselves up at the table in the approximate order we would finish a parkrun).  The first time someone took my water I cheered, it was like finally being picked for a netball team.  The early runners zoom past and snatch the water out of your hand so fast that they nearly take your arm with them.  We had great fun informing people of their place in the race relative to others of their kind: “First lady! Second lady! First hot dog! First tutu!  Third clown!” etc.  This didn’t get old but I did lose count very quickly.

Around the two hour pace mark, my friends started filtering through: as well as the running club people in green, there was Zoe from one of my Facebook running groups, Susan from school, Jim and Abby… there were also a few more who I missed in the mele.  (Sometimes I am glad I am not an average runner.  I could not deal with all those people around me.)  I noticed the crowd thinned out very abruptly after the 2:30 pacer passed – it went from a gaggle of runners to a odd selection of power walkers, limpers, fancy dressers and late starters.  The last person before the sweep up coach was very obviously a late starter, running at a pretty fast pace – I guess fast enough to catch and overtake the 2:30 people eventually!  It must be really weird to start a race all on your own and run thorough completely empty streets.

After the water station closed, we walked to the finish area where there were far too many people.  I watched a few runners finish and saw Linda from the RunThrough races powering along to her sprint finish with a very red tomato like face.  I tried to cheer her on but she was In The Zone.  There were still too many people so I walked all the way back to Clapton where I met Jim, Abby and an assortment of other very sweaty medal wearing people and spent approximately seven hours and seven minutes drinking beer and eating nasty vegan lava cake.  As mentioned in previous post, I got very drunk and told everyone in great detail that I had recently run a marathon yes that’s right a marathon I ran a marathon look at me and then tried to persuade them all to come to Brighton next year and run it.  Even though I am not running it myself.  Jim says that I have to include his finish time in my blog entry so here is an announcement: Jim finished in 1:59 something.  He is very pleased with his time.  He said so at least fifty-nine times.  I also need to give a special mention to Rob who WALKED the whole thing in 2:24.  That is eleven minutes faster than  PB.  I am massively impressed by this but also think that the sooner he gets back to running the better, he is showing me up by walking faster than I can run.

Apparently I get a free place in next year’s Hackney Half for volunteering, so it looks like I’ve got no chance but to run it.  I also got a free hat.  It makes me look like a twat.