I am no longer training for anything (well, a few 10ks, but I can already run 10k) and this means I can do exactly as I like.  So with this in mind, I went for a run.

I have the Chase The Sun season pass this year, so I can attend as many of the Wednesday night events as I like.  Yesterday’s event was at Clapham Common, and appeared to be the ideal opportunity to bore some people with my marathon story.  Neither my colleagues nor the pedicurist at the gym seemed to care, but surely fellow runners could not fail to be interested!  I put on my “Brighton Marathon Finisher 2018” hoodie, puffed up my chest and headed south. 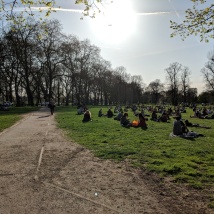 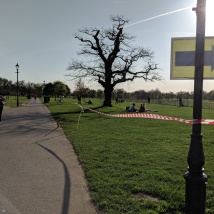 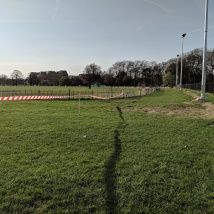 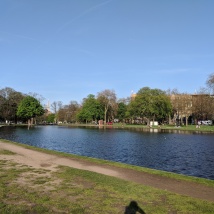 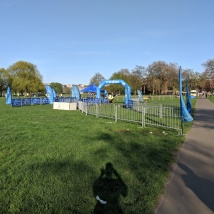 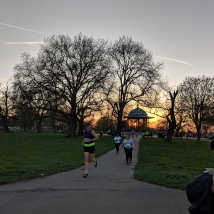 I’ve never run on Clapham Common before and to be honest I don’t think I’ve been missing much.  It was a baking hot day and all the people of Clapham were out getting delirious in the sun.  This caused them to all become extremely annoying and not get out of the way even though it was clear there was a race going on.  The route was two laps, nearly half tarmac and half a trail path, with a small grass section connecting them and the start and finish on grass as well.  (It is very similar to the route of the new Clapham parkrun, so I guess I don’t have to bother doing that now).  All the paths are quite narrow and the tarmac is full of potholes while the trail paths are annoyingly not-quite-straight and full of tree roots and other trip hazards. 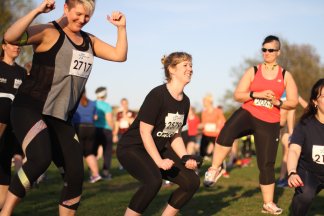 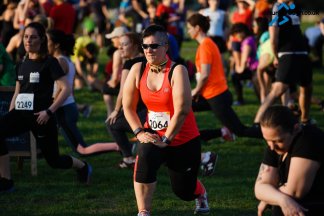 I have been caught in the act of participating in an organised warm up!

Because it was such a lovely day and because I was full of marathon related bravado, my heart and mind were absolutely dying to get out there and run.  My legs, however, had other ideas.

“What the hell?” said one of my legs.  “Not this again!  You can’t be serious!  We only just stopped carting you around Brighton.  I’m not having it!  Stop right there!”

And like that they both turned to lumps of lead at 1km and refused to run any further.  However, as I am not training for anything and can do exactly as I like it didn’t really matter and I moved to the side to let the faster runners through and walked most of the course, only picking up the pace when the tarmac was smooth enough to be to my satisfaction or I spotted a photographer.  I did manage a half-hearted sprint finish, and, unbelievably, the coveted flying feet photo.  I am such a fraud!

I haven’t bothered to look up my official finish time but my Garmin says 42:52, which is two minutes slower than when I was tail walker at parkrun!  I think all in all we can conclude I wasn’t quite ready to make my comeback, but it was lovely to see all my running friends in the sun and the lovely RunThrough staff, and I look forward to a summer of running.  Next week’s Chase The Sun is at Hyde Park and I’m not going to run at all until then and hopefully put in a somewhat less pathetic performance.