I am beginning to think I will never get to Barking parkrun!  Yesterday evening I was all set for my trip there, but a last minute check of the train times revealed engineering works on the Gospel Oak to Barking line which meant I would need to get up at 5am and catch a hundred buses to get there on time.  I am seriously sick of the Gospel Oak to the Barking line!  It, or the lack of it, has stopped me getting to all sorts of running, genealogy and social life related things for about a year now and I think it’d need to reopen with massage chairs, free champagne and Cheryl Cole as a ticket inspector to make it worth the hassle.

Anyway, I was out of energy and ideas, the weather was lousy, and I went to Finsbury Park last week, so I decided to plump for another local one, Hackney Marshes.  Hackney Marshes is actually closer to my house than Finsbury Park, theoretically I could get there by a pleasant 10km walk/run/cycle through the marshes, but I couldn’t be arsed and got the bus.  I do plan to go the more energetic route in summer when it’s a bit nicer though.

Hackney Marshes is a very good choice when the weather is bad as the starting point is by the Hackney Marshes centre, which is a team sports type facility with changing rooms, vending machines, a café, very clean toilets, etc.  This means you can shelter indoors until it is time to run.  It is also a good choice on a hot days because a lot of the route is tree-lined and provides a little shade.  This was obviously not applicable today. 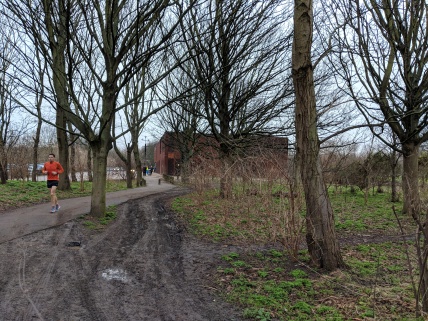 Hackney Marshes has a reputation as being a very fast route but personally I don’t find it as fast as Dulwich or Bromley.  It is certainly the flattest parkrun you will ever find – my Garmin recorded a grand total of 2m elevation for the entire course, and you can probably pin this down to a mound not much bigger than a speed bump about a kilometre in, and a bridge that you cross twice.  It’s a very simple route.  The first kilometre or so is down a leafy path along the River Lea, then the path turns into an open plane with a lovely view over the Olympic Park (which would make it a good choice for any tourists from outside London), then more trees.  The surface is tarmac, and it’s mostly pretty good, but there are a few big potholes to watch out for.  (These did nothing for my maranoia)  I believe the course used to carry on down the Lea Canal, but for the last year or so there have been building works going on at a sports pavillion, so the turn around point comes at 2km instead of halfway, and a “dog leg” section has been added just before the finish, which takes you over a bridge, almost to the bridge into the Olympic Park, then back again.  The surface on this section is different, some kind of compact sand, and I found it slowed me down quite significantly (more so than a hill).  Annoyingly, it didn’t seem to have this effect on anyone else and I was overtaken by about ten people on this section!

A view of the River Lea from the running path

The end of the run has a good clear section for a sprint finish, and you also pass the place where all the runners who have already finished, so you get a good cheer squad!

My finishing time was 35:48, which I was reasonably happy with – as I have a 10k tomorrow, I hadn’t been busting a gut to get a PB.  I was three minutes faster than my previous best on this course, last March, but I have run faster at three other parkruns (including Finsbury Park, despite the hill).  Just like my previous visits to Hackney, that time had me right at the back of the pack.  It is a parkrun that does not attract walkers or slow runners, and I am not really sure why that is as you’d think beginners etc would embrace the easier course.  My previous visit to Hackney was as “Talk Walker” (a volunteer who walks/runs just behind the last person, to make sure no one gets left behind and to spot anyone in trouble) and my time then was just under 41 minutes – there wasn’t a lot of walking involved!

At the finish I was pleased to spot Gianne and Frank from the ViewTube runners group and grab a quick photo.  Of course they are much faster than me and this is why I look all red faced and sweaty and they have had time to return to their normal complexion.