Yesterday it was off to the Olympic Park for another RunThrough race.  Throughout the summer, RunThrough organised a series of “Chase The Sun” races, taking place in a variety of parks throughout London on Wednesday nights, starting at 7pm.  As a shiftworker I am always extraordinarily grateful for any company that puts things on on weekdays.  People always go on about how grateful they are for us emergency service workers and how they wish the government would do more for us etc, but when it comes to something they can actually do for us – organise events on weekdays so we don’t get left out – all you usually get is a look of horror and “but that’s a schoolnight”!  Anyway, I digress.

The Olympic Park is probably my favourite place to run.  The terrain is perfect for me – because it’s really new, the tarmac is really smooth with absolutely no trip hazards.  There are no hills, but none of it is perfectly flat either, and I find I run a bit quicker on terrain like that than the pancake flat.  Finally, there are lots of things to look at – the north of the park is faux-wild, whilst the south has a more man-made look with fountains, decorative lights and of course the Olympic stadium, the Aquatics Centre and the Orbit Tower (which I have also run up in the past).

After torturing my legs with the Viewtube track session last night, I realised that going for a fast 10k so soon after wasn’t a good idea and thus my choice was between a fast 5km and a slow 10k (RunThrough let you choose on the day).  I thought the slow 10k would be more enjoyable and beneficial for my marathon training, so I set off right from the back with the intention of not looking at my watch and just going at whatever speed was comfortable.

The 10k is four laps of the South Park.  It starts near the Orbit with a gentle downhill over a bridge and past the Aquatics centre, then a gentle uphill along the Lea river, until you reach Carpenter’s Road, then it’s along the pavement, into Loop Road and then back into the park behind the stadium (there is a slightly annoying gravelly bit at this stage, but it’s over quickly), a dog-leg behind the stadium, then a circle round the bit with the bridges.  Next you run down a really pretty walkway with lights that cast a dotty pattern on the path, up round the orbit, past the start and then on to the next lap.

As always, being slow means that the fourth lap is quite traumatic, because you see a load of medium paced runners finish when you still have a lap to go, and suddenly you are all on your own.  The combination of it being absolutely freezing cold and there being a 5km option meant that there were even less slow people than normal doing the 10km and I felt like I was completely on my own as I ran along the Lea river for the fourth time.  I knew a girl called Rosemary who I often see at these races who runs about the same pace as me was also taking part, but I couldn’t even see the back of her head (I spend a lot of these races looking at the back of Rosemary’s head) and wondered if she had dropped out or suddenly got really fast.  (I am glad to report it was the latter.  Apparently someone offered to buy her dinner if she got a season’s best!)  Thank god for the very supportive marshalls who cheered me on despite the fact they must have been freezing to death.

At this point I started to wonder just how slowly I had been going and took a first look at my watch.  I was surprised to learn that actually I had been going considerably faster than my last 10k at Battersea Park, when I’d been trying to run as fast as possible.  As this had genuinely felt like an easy pace, I decided that it wasn’t fair that I was going to come last, and that I could probably beat my Battersea Park park time (1:15:42) and so I put my foot on the accelerator and ran as fast as I could.  As I came into the gravelly bit, I spotted two runners ahead on the dog-leg.  One looked like he’d had enough of the whole thing and the other was limping a bit.  Right! I thought, channeling Mo Farah.  I can overtake these!  And I sprinted as fast as I could and passed them both on the uphill.  By the time I reached the Orbit I was in a prestigious third-from-last place, my favourite running song (“Like A Rocket” by Faderhead) was on my headphones, and the finish line was in sight.  I finished two minutes ahead of the final person, with an official time of 1:13:58.  This is my fourth fastest 10km time ever, and my fastest this year!  So much for taking it easy! 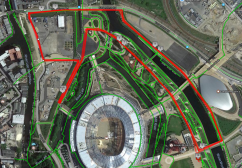 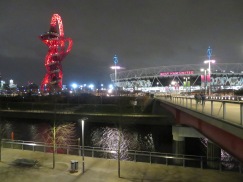 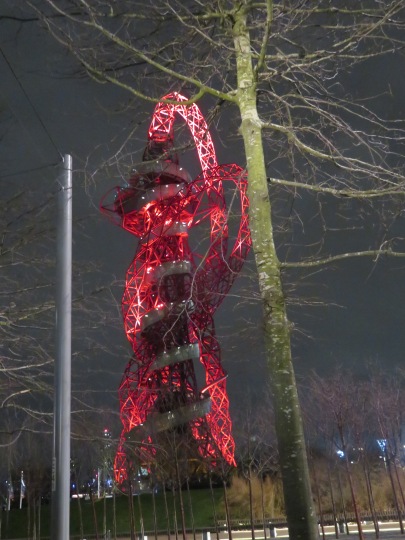 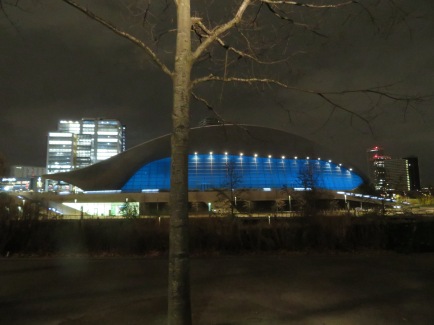 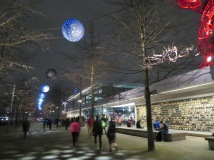 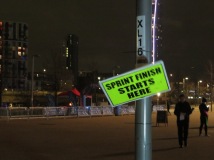 Me on the left.

Think the RunThrough photographer was having a bit of an off day!