As John Fashanu said, the only way for a black man to make money in the 1980s was to sing, dance or play football.  Michael Menson chose the musical route, and those of us of a certain age may remember his work as a member of Double Trouble, as in Double Trouble and the Rebel MC who were responsible for the earworms “Street Tuff” and “Just Keep Rocking”. 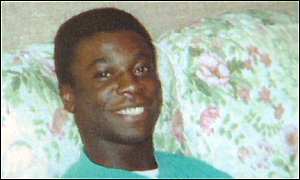 In 1991, though, Michael’s musical career came to a halt when his mental state deteriorated and he was diagnosed with schizophrenia.  He’d been in and out of hospital for six years and at the time of his death he was living in supported accommodation for people with mental health problems.  Some statistics:  Black African people are seven times more likely to be diagnosed with psychotic illness than their white counterparts.  They are four times more likely to be sectioned.  They are more likely than white people to take their own lives, yet less likely to be diagnosed with depression.  The “macho” stereotype that John Fashanu mentioned is surely a factor here – there is a stigma of “weakness” attached to depression at the best of times, and that stigma is felt more strongly by black men.

On the evening 27 January 1997, Michael was asked to return to Chase Farm Hospital for the “ward round” and he boarded a bus with the apparent intention of doing so.  Michael was followed by four white youths, and when he got off the bus, they set upon him, launched racist abuse at him and stole his personal stereo.  Then one of the youths took a lighter to Michael’s anorak, which quickly caught fire.  Terrified and burning, Michael stumbled towards a nearby busy road to plead for help.  Passing motorists came to his help, and he was found in a severe state of shock with third degree, full thickness burns to his back, buttocks and thighs.

Michael’s injuries didn’t kill him straight away.  The police contacted his friend and family members and told them that Michael was in hospital after setting himself alight.  At that point, no one knew what had happened and Michael had not been interviewed.  The police merely assumed that as a psychiatric patient, his injuries were self inflicted – though the fact that his burns were on his back and that he was found in the process of seeking help might point to the fact it was an assault.  Michael told his brothers again and again that someone else had done this to him.  He gave a full account of the events leading up to the assault and a description of his assailants.  His brothers went straight to the police with this information, but the police did not interview Michael.  On 3rd February his condition deteriorated, and he died ten days later.

It was not until the inquest into Michael’s death, eighteen months later, returned a verdict of “unlawful killing”, that the police started to investigate Michael’s murder.  By insisting that he had killed himself for so long, despite the statements of Michael’s family, of nurses and independent experts, meant many opportunities for investigation had been lost.  The case was reopened, but went nowhere.

One of the police officers said to a pathologist during the inquest: “I don’t know why they’re so bothered – this only concerns a fucking black schizophrenic”.

Then, in late 1998, the case was passed to a newly formed racial crimes unit.  The new team identified and investigated those responsible surprisingly quickly – it’s almost like they knew what happened all along.   Mario Pereira and Barry Charalambous had their homes bugged, and Pereira was caught discussing the murder.  “So what?” he was heard saying.  “He was black!”  Two further men were also identified and all four were finally prosecuted.

No police officers were ever held accountable for their bungling of the initial investigation.

“Michael didn’t deserve to be burned to death and he didn’t deserve his murder not to be taken seriously and it is that that has kept us strong in our drive to get these convictions.” – Kwesi Menson, Michael’s brother.

Black Thrive is a charity supporting black people in the London Borough of Lambeth, which has the highest rate of black people accessing mental health services in the UK.