Pymmes parkrun is the second closest to my flat and the third different parkrun that I attended (after Finsbury Park and Hackney Marshes).  Despite it’s proximity I haven’t been back since that solitary visit nearly three years ago and you might be forgiven for thinking that it was a horrible and unsuitable parkrun.  This is not true at all.  It’s a flat, fast, all tarmac course with no obvious trip hazards in a pretty if rather ordinary park – not entirely dissimilar to my Flat Favourite, Barking.  So why have I not been back?  The simple reason is, there is no toilet.  Not even a nearby cafe with a toilet.  Have you ever tried running 5k with a full bladder (or worse?).  It’s not something I enjoy, and that is why I haven’t been back.  Annoyingly, there is a toilet block right by the start but apparently due to dubious behaviour from local residents it was permanently closed and shows no signs of ever reopening.

However since bloody coronavirus became a thing there are no public toilets anywhere and I have worked on getting the balance right between dehydration and overfilling my bladder as well as performing all other necessary bodily functions before leaving the house for my runs (an unexpected benefit of the measures, I suppose) and now might as well go to Pymmes.  It’s about an hour’s walk from where I live, half of which is a very pleasant trot through the marshes and the rest a horrible slog past a travellers’ community where I am invariably chased by angry chihuahuas and then through an industrial estate and along the North Circular.  That Side of the marshes is a lot less pleasant than This Side, and this side is hardly Kensington.  I lost count of the number of discarded plastic gloves and masks I saw by the roadside on the way to the park.  Misused PPE is fast becoming my biggest coronagripe at the moment.  I wish people would realise that using it badly is worse than not using it at all, and also that Greta Thunberg might be quietly self isolating somewhere but it doesn’t mean the climate crisis has gone away.  Annihilating the entire planet with plastic waste is not a suitable method of containing the virus.  Fucking stop wearing fucking plastic gloves.   Seriously.

Anyway, it was a nice warm day quite unlike my 43rd birthday, so unfortunately the park was full of people, as usual with varying senses of what constitutes two metres.  I was a little worried that I wouldn’t remember the course but fortunately it was basic enough even for me not to get lost.  Just as I was pondering where to start, I noticed “start” sprayed in orange paint on the path, and at every kilometre there was a number.  The course is basically just three times around the perimeter of the park – there’s only a couple of paths that go elsewhere, and if you just remember to stick to the outside of the park without actually leaving it, then you are on course.  There’s a small “wetlands” section, some tennis courts, a field, some trees, a random building that isn’t a toilet… the usual things you would expect in a park, coupled with a lot of orange netting that looked like a parkrun funnel but was actually designed to stop you sitting on benches and using outdoor gym equipment.  The only thing resembling a hill is a small upward slope by the pond though I think there is an invisible hill just like at Dulwich somewhere near the start of the lap. 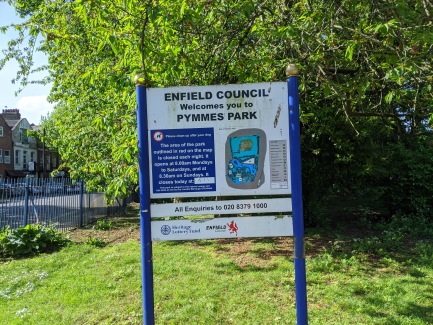 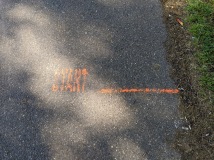 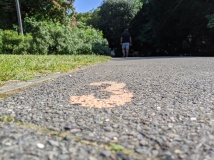 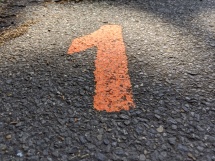 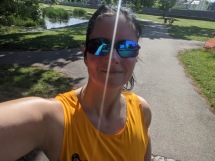 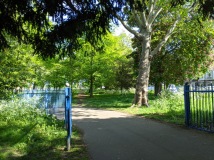 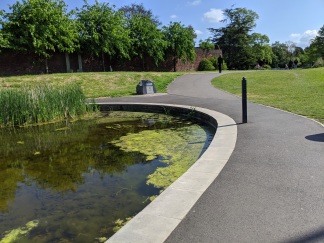 I ran three times round the park without any calamity and stopped my watch when it said 5k as no one had sprayed the finish line on to the path (I suppose it is usually obvious) and I couldn’t remember where it was meant to be.  (If I had a brain I would have thought to consult the photo I posted above.)  My finish time – 36:14 – was four minutes faster than in 2017 but then I did have a broken leg at the time so it bloody well should have been.  On the whole my ability to run long distances at a respectable pace has improved massively lately but my ability to run short distances fast hasn’t.  I can’t work out if this is because I just can’t be bothered to overexert myself when it’s not going on RunBritain or because I am just a great big snail with a dodgy ankle that will never be 100% better.  Probably a bit of both.