I think the Contraption is trying to tell me something.

It all started because I started getting complacent.  Spurred on by trivial achievements easily accomplished by the average primary school pupil, such as Mounting With An Audience and Getting Over A Bridge Without Falling In The Water, I started to think I was Victoria bloody Pendleton.  I watched competent triathletes taking part in the London Triathlon and thought “actually that doesn’t look too bad”.  I went to the Ride London expo and tried on helmets worth more than my Contraption and pretended to know what an electronic shifting cog-buster (I forgot what it is actually called so I made something up) is and prodded expensive road bikes lovingly.  Facebook ads started showing me cycling jerseys and chain cleaning fluid (and, er, electric tricycles).  I even considered entering the Ride London ballot for next year.  Because not only am I a (rubbish) runner and a (sluggish) swimmer, I am now a (crap) cyclist too!

The first thing to go wrong was the gears.  Cruising across Tottenham Marshes, I tried to change up into Big 3 (another thing I do not know the proper name for.  I hope this post makes sense) but found the gear knob absolutely jammed.  In my attempt to unjam it, I turned it the other way, and took the Contraption into Big 1, which is the stupid little gear that you only need if you are cycling up vertical hills, which is something I am going to do precisely never.  On the flat in this gear your legs go round and round like a hamster in a wheel and yet you move so slowly that runners start overtaking you.  This was clearly not going to get me home any time soon, so I stopped to Google “jammed gears”.  The Internet told me that I needed to turn the Barrel Adjuster anticlockwise.  I did not know what a Barrel Adjuster was so I had to google that too, and I also wasn’t really sure which way was anticlockwise so I googled that for good measure.  I honestly wasn’t expecting anything to happen but when I tried to start the Contraption again there was a clunk and suddenly there I was in an appropriate gear.

Clearly I should have taken this as a warning that the Contraption was not happy and wanted this great lump off its back, but instead I thought to myself “woo hoo now I am such a good Cyclist that I can fix Contraptions on the go!” 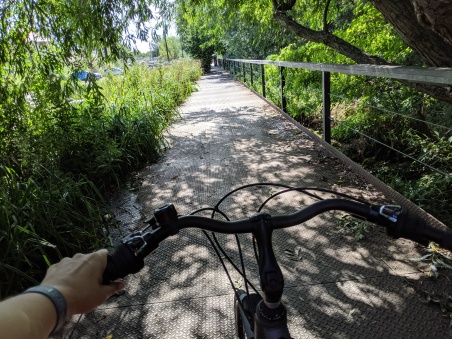 The next thing to go (on my next ride) was the tyre.  The Contraption is usually quite comfortable to ride on uneven surfaces like the unmade path over Walthamstow Marshes, as it has fat wheels, suspension and a comfortable saddle.  At first I could not work out why this time did not seem as comfortable as usual.  In fact, I seemed to be juddering and losing speed and… Oh no.  As I ground to a halt, I could see that the back tyre was completely flat.  Now I may be able to turn a Barrel Adjuster anticlockwise but I haven’t a sodding clue how to change a tyre so the only option was to wheel the bastard bloody contraption four sodding kilometres to the nice people in Frankenbike who duly relieved me of fifteen quid and reinflated the Contraption.  (It is a curious feeling seeing your poor helpless bike cranked up on a stand being taken to pieces.  A bit like leaving your dog with the vet.)

And this wasn’t the end of it.  After finally getting back on Contraption and doing the U turn practice that I had set out to do (three hours previously), it was time to go home.  Except now it was getting dark and the path through the wetlands was closed, so my only routes home were the long way through the marshes (where my neighbour got mugged and had his bike stolen, breaking his leg in the process) or down the roads.  I chose the roads.  The few kilometres went fine, but then I turned into a residential back street.  I should know to avoid these streets.  You would think they are the safest place because everyone moves slowly, but in fact it is much safer to cycle on main roads where there is plenty of room and cars are quickly out of your way.  Halfway down said back street I became aware of a car very close to my rear end.  Assuming the driver was unimpressed by my snaily cycling and wanted to pass, I pulled into a gap between parked cars and cycled slowly to give him room to pass.  But the driver just pulled up alongside me and I realised, too late, that he actually wanted to park in the space.  Of course, now he was alongside me I didn’t have room to get out unless I turned at a right angle (not yet something in my skill set) or dragged the bike over the pavement and reboarded elsewhere.  You can see where we’re heading now, can’t you?  I hesitated a second too long, teetered, toppled, and crash, there I was sliding down an inconveniently placed tree, landing half on the pavement and half in the road, an ungainly pile of twigs, legs and bike.  I untangled myself and got myself to my feet as quickly as I could and scuttled off not knowing whether to feel angry with the driver (who didn’t even ask if I was okay) or with myself for daring to think that I was a competent cyclist who could be let loose on the roads.  I wheeled Contraption home, my face red with shame and my left arm gradually turning a delightful shade of aubergine. 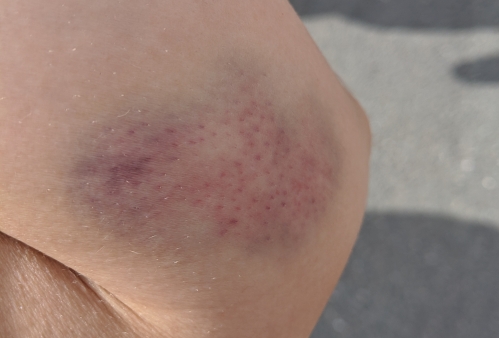 And now it is four days until the triathlon and this is the last time I rode my bike.

Finally – I can’t believe that when I wrote my list of Trianoia fears the other day, I forgot to include the most obvious and pervasive fear of all.  Weather.  My old nemesis.  This too has come back to bite me as all six of my weather apps are now predicting gale force winds and a splattering of rain for Saturday morning.  I fear the inevitable conclusion of this triathlon farce is that I will be blown clear off my bike and be swept out to sea and never be seen again until my battered body is washed ashore near the Birling Gap being nibbled by sharks and box jellyfish.