The fact that it’s taken me until Wednesday to write about my half marathon performance has probably tipped you off that it didn’t go as well as I’d hoped.  It was, in fact, the 2014 League One Play Off Final in the form of a run.  (My Livejournal post from said event, if you need more explanation, is here).

I will start with the positives.  It was a fantastic event, really well organised and thought out, and good value at £36 (including t-shirt, medal and photos).  I wouldn’t have expected anything less from the RunThrough team, but it was a lot bigger than the events they normally put on and they pulled it off really well.  I really enjoyed the first thirteen kilometres of it and the bits that I didn’t enjoy weren’t the fault of the event at all.  I want to come back next year and do it justice.  A lot of us had misgivings when they saw the map because it looked so complicated and twisty-turny but it worked so much better in practice.  There were loads of marshals and signs and there wasn’t a single moment where I worried about taking a wrong turning.  The course was definitely not flat, but none of the hills were big enough to make me walk. (Other things made me walk later on, but not specifically the hills!)

Because it was so local about a million people I know turned up, including lots of the ViewTubers and the RunThrough regulars, plus my ex (not the horrible one) Jason.  I’m sure when we went out 18 years ago we never thought we would be competing against each other in a half marathon.  (To be fair we weren’t really competing, I could have got a PB and he’d still have beaten me by nearly an hour.  But you know what I mean.)

The weather was unfortunately not great.  It was still very windy and there was an incessant drizzle.  My socks got very wet walking across the grass to the bag drop which was not a good start to the day.  In the start pen I met Deborah, Michelle and Gianne from Viewtube and it was really nice to start the race with my friends and run the first kilometre with them.  Unfortunately their half marathon pace is my 5k pace and I knew it wasn’t a good idea to keep trying to stay with them so I dropped back after the first kilometre and maintained a pace of around 7:30 per km, which kept me just in front of the 2:40 pacer.  This seemed quite comfortable and had it stayed that way I would have been delighted with the outcome.

The twisty-turny path meant you got to see loads of the other runners without ever being lapped by them!  I loved giving my similarly-paced friends a wave on the out-and-back sections and occasionally I would look up and see a path of differently paced runners going over a bridge or round the velopark, so I saw a few of my faster friends too – and at one point I saw the leader wooshing along a path that I was not to reach myself for at least an hour.  This really kept my spirits up, especially in the latter stages.  Also exchanged a few encouraging words with strangers and only got positive comments on my Vegan Runners top – either from other vegans or people saying they were going vegan.  Unfortunately I was in no position to stop and chat and extol the virtues of veganism.  Also my performance wasn’t a very good advert for the cause.  I need a “You should see how slow I was before I was vegan” top.

At around 5 miles there was a really tough bit as we did a loop of the Velopark and it was very exposed to the wind.  I lost a bit of time (and the 2:40 pacer) here, but I wasn’t too worried as I knew it was the hardest part and that I had plenty of time to play with.  I hit 10k bang on target.

Unfortunately over the next few kilometres I started to develop a niggle right in the middle of my back.  I have no idea where this came from!  I never get back ache, it’s normally my legs that hurt.  I wonder if it might have something to do with being ill recently and all the coughing making my muscles tight?  Whatever it was, it was getting tighter and tighter and of course the motion of my arms and the impact of my feet on the floor made everything worse.  If it had been a training run it would have been wise to cut it short at this point but it wasn’t a training run, it was my big race!  Now was no time for things to start hurting!

As I was coming up a little hill out of the velodrome area I was passed by one of the pacers, who promptly turned round and did a jaunty little backwards run up the hill doing a beckoning motion with her hands.  I am afraid this was not well received by me at all and was a bit of a turning point and the first time I walked.  Part of me thinks I am being unfair ranting about this as I am sure she didn’t mean to be quite as patronising as she came across (and had I not been in pain I would have just brushed it off).  But I would like to say this now as a message to all pacers.  Never run backwards at people.  Expecially up a hill. Because the message you are giving is “look, get on with it, I can run backwards faster than you can run forwards, ffs”.  And that isn’t encouraging.

Fortunately the spell of walking meant that Patronising Pacer wasn’t near me for long, but once the floodgates had opened, I just kept walking.  My back only hurt when I tried to run so I just thought to myself that if I could walk extra fast with a bit of a run here and there I could get round the last 5k in time to still beat my time from Barcelona and get a Personal Second Best and go home happy.  I watched the predicted finish time on my watch grow from 2:42 to 2:55.  2:55 would have been fine.  Not great, but it would have done.  My time from Barcelona was 2:56:38.   According to Strava, I got a PB for 15k and 10 miles.  This is actually a Personal Second Best because joined Strava just after Brighton 2016 but I actually think it would be better for my morale if I just put Brighton 2016 in the memory box and only tried to compete with my more recent efforts.

Unfortunately, I had made a dangerous assumption in that I thought my Garmin was going to measure the course a bit short.  I was passing the mile markers before my watch said I had run that distance.  But the final mile – an out and back section round the back of the park – seemed to be twice as long as the others.  I passed Rosemary who was on her way back up the hill as I ran down it and tried to give her an encouraging wave.  She just shook her head at me, as if to say “why are we putting ourselves through this?”  I knew exactly what she meant.  By the time I rounded the stadium, my watch had clocked 21.1km and the course clearly wasn’t going to measure short after all.  2:56.  Finish line in sight.  I ran, which bloody hurt, and crossed the finish line with a whimper.  2:57:04.  Fucking bloody bollocking hell!!  I was consoled by Rob, Jason and my mother, who’d all nearly caught pneumonia waiting hours for me to finish, and the lovely Mike Hawthorne hung a really nice medal round my neck.  The t-shirt is a lovely blue colour (although they’d run out of mediums so it is a bit voluminous).  I am going to wear it to Chase The Moon tonight. 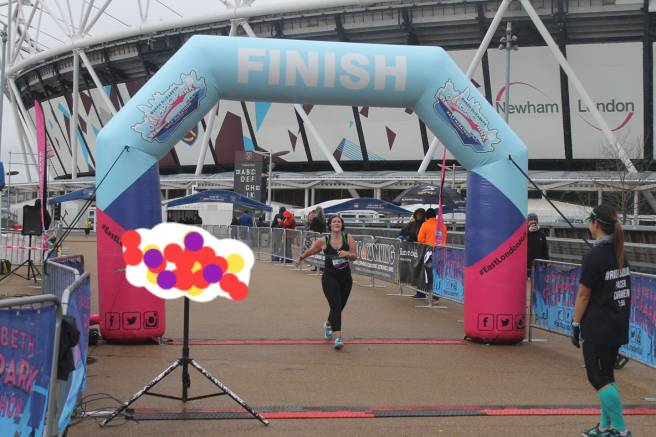 I was bitterly disappointed with the way my race had ended and I’m afraid none of the nice things my friends said to try to make me feel better really worked.  Yes, I still “got out there and did it”, but as I actually like running it’s not exactly an achievement to force myself to go out for a run, and after nine half marathons I don’t think just finishing is much of an achievement for me any more.  And as much as people tried to tell me that my back going was just a random occurrence that I couldn’t have helped, I do feel that keeping yourself free of pain and injuries is as much of a talent as training to make yourself faster and I had been really proud of how well I have kept injury free in the last year. 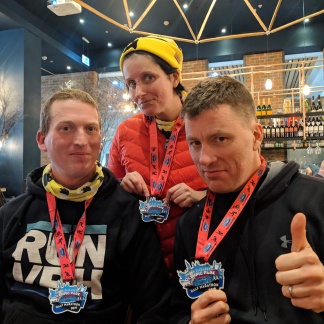 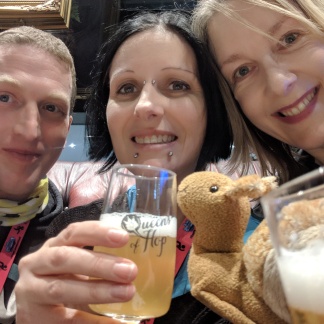 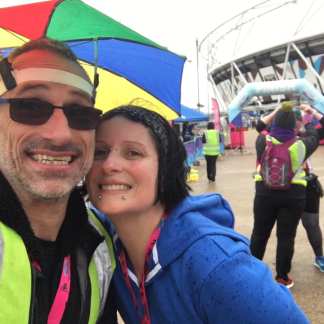 After the race.  The Garmin can fuck off, frankly.

I’m not sure if it made me feel better or worse that my back stopped hurting pretty much straight away and has only felt a little bit stiff these last two days since the race (I have not tried to exercise on either day though).  Obviously a catastrophic injury would have been adequate mitigating circumstances – but it might also have been something that dragged on and cost me more races.  I could not bear another 2017.

The one thing that does make me feel better is that I have another half marathon in six weeks!   I initially thought it was a bad idea to do two but I had already signed up for London Landmarks when Olympic Park was announced and didn’t want to miss out.  Now I feel London Landmarks could be my second chance and saving grace.  Or, if it all goes tits up, at least I know that it wasn’t just a freak occurrence and I do actually deserve to be this slow.